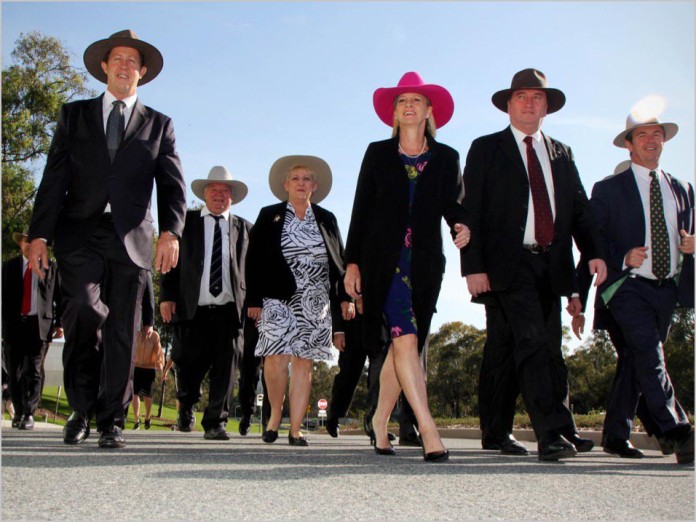 news The new federal leadership team of the Nationals unveiled late last week — Barnaby Joyce and Fiona Nash — personally criticised the use of copper for broadband services in 2005, it has emerged, telling the then-Howard Government to focus on the use of Fibre to the Premises technologies instead.

However, as first reported by the Guardian last week, both Joyce and Nash have somewhat of a complicated past when it comes to their personal policies on the future development of Australia’s telecommunications system.

In 2005, the pair personally put their names to a research paper put together by the Page Research Centre, entitled ‘Future-Proofing Telecommunications in Non-Metropolitan Australia”. The full paper is available online in PDF format.

The document made the point that the lack of competition in Australia’s telecommunications market — which continues to be largely dominated by Telstra and Optus — meant that consumers were “forced to use technologies or infrastructure which is fast becoming outdated”.

“The copper line network is a case in point,” the paper stated. “Most are in agreement that copper line is becoming redundant, but few companies are now actively introducing new alternatives.”

The document proposes the option of replacing Australia’s copper line network with next-generation fibre-optic cable and then lease access to the infrastructure to telcos such as Telstra, in a model remarkably similar to Labor’s original Fibre to the Premises-based NBN model.

Nash went further in her first speech to Parliament in August 2005.

Since that time, the Coalition Government under Tony Abbott and then Malcolm Turnbull has radically reshaped Labor’s NBN model. It will now integrate Telstra’s legacy copper network as well as the HFC cable networks owned by Telstra and Optus.

opinion/analysis
Did Fiona Nash and Barnaby Joyce personally support a report back in 2005 calling for Telstra’s copper network to be replaced with fibre, and describing copper as “redundant”? Yes, they did, and Nash personally went even further in her maiden speech to Parliament.

However, as you may suspect, the situation is a little more complex than this.

For starters, one need hardly point out to Jason Clare that back in 2005, Labor — yes, Labor — also supported a copper-based National Broadband Network. It was Kevin Rudd and Stephen Conroy who developed a policy over the next several years which would see Labor take a NBN policy to the 2007 Federal Election based on Fibre to the Node — not Fibre to the Premises.

What we see then, in 2005, is a situation where, ironically, Nash and Joyce were advocating for Fibre to the Premises to be deployed around Australia, while Labor was actually supporting Fibre to the Node. How the worm has turned.

Secondly, the Page Research Centre’s report is a little more complex than one may suspect — it makes a whole raft of recommendations rather than just focusing on copper. The areas where it talks about copper are actually more about discussing the failure of telecommunications competition policy in Australia, including the forthcoming sale of Telstra, than technology versus technology per se.

Nash’s maiden speech is also relatively nuanced. Sure, the neophyte National Senator did slam copper, but she also noted that she supported the then-Howard Government’s telecommunications policy of the day.

And lastly, of course, it also appears that Nash’s opinion re fibre and copper has changed as the technology involved in FTTN has also changed. The Senator told the Guardian yesterday that she wasn’t in the habit of picking winners on technology and that people didn’t really care what technology was used, as long as they got better broadband. “I think we have the NBN policy pretty right in the platforms of delivery,” Nash reportedly said.

Still, there is a lot in that Page Research Centre report that rings true. Separating Telstra from its copper network; upgrading that network with fibre; reselling the fibre network access back to retail telcos for on-selling to consumers; not focusing on Telstra’s share price but instead focusing on developing competition in Australian telecommunications … there’s a lot of good stuff in there. Visionary. One does rather wonder whether it influenced Labor’s own NBN policy.

One could wish — for everyone’s sake — that the report’s recommendations had been followed rather more precisely than they have been.