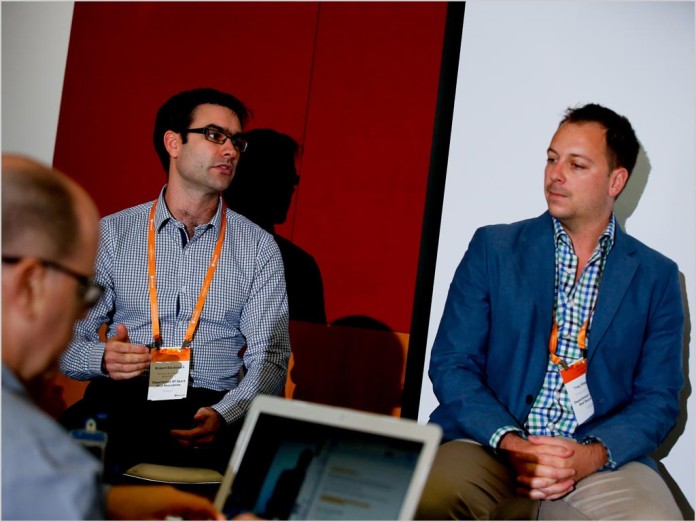 news The Western Australian Department of Sport and Recreation (DSR) has moved a number of servers to Microsoft’s Azure Cloud to better connect its 17 locations throughout the large state – including some in the more remote Pilbara and Kimberly regions — and is planning further use of Microsoft’s cloud environment.

The DSR provides “leadership and coordination” for sport and recreation services throughout Western Australia, establishing partnerships between industry, government and other stakeholders. It also provides consultancy services and resource support to individuals, organisations and community groups.

According to a blog post by DSR chief information officer Marc Dimmick, the agency has been able to replace nine physical servers from its remote and regional offices by leveraging ExpressRoute connectivity into Azure Cloud.

The organisation’s network and systems administrator, Robert Blackstock, and ICT service desk co-ordinator Troy Stevens (pictured above) also presented in detail on the rollout at Microsoft’s Ignite conference on the Gold Coast this week.

Blackstock said previously it could take weeks to get technicians out to remote sites, which could be impacted by local extreme events such as cyclones. Now, it’s only important that the sites have network connectivity, with the servers being hosted in the cloud. “It’s a very powerful situation,” he said.

According to Microsoft, Azure ExpressRoute lets organisations create private connections between Azure datacentres and local on-site infrastructure. Connections are not made over the public Internet and offer more reliability, faster speeds, lower latencies, and higher security than typical Internet connections. Azure also removes the ‘single point of failure’ for each site.

Following the move to the cloud, the DSR’s IT department can now provision service through its platform in a matter of days, whereas previously it was “a matter of weeks or potentially months”, according to Dimmick. Furthermore, managing the IT infrastructure can be left to Microsoft and Azure, giving the DSR more time to innovate and develop its services.

Leveraging the cloud, Dimmick said in the blog post, “streamlines the adoption and interoperability between technologies, enabling us to deliver a far better service”.

“For the IT department, it has really changed the way we work in that we can now provision service through our platform in a matter of days, whereas before it was a matter of weeks or potentially months with physical service because of that remoteness,” Dimmick wrote.

“We don’t have to worry ourselves about IT infrastructure, because we can leave that to Microsoft and Azure; now we just worry about the application of services and how build on top of that, so it gives us more time to innovate and improve our services for our staff members and the people that we support.”

“For example, one of the great things we have been able to do it is to forget about back-up tapes because we now automatically back-up to the cloud. Leveraging the cloud just streamlines the adoption and interoperability between technologies, enabling us to deliver a far better service.”

Dimmick said the DSR started working with Microsoft Azure when the organisation was looking to take advantage of the Office 365 licences included in our enterprise agreement to ensure it had a stable environment for authentication and single sign-on.

“However, since the cloud transformation we’re now looking at further utilising the services that come with the platform, which has the potential to change the way we do so many things,” he said.

“The next solution that we’re to utilise is Power BI to better analyse our data and make it more visual. Not only so that we’re able to make better decisions but also to tell a better story of what we’ve done with our investment, both in technology and the public money that’s been invested in our department towards the delivery of vital services for the community.”

Stevens said the department was also close to completing a rollout of a hybrid version — part cloud and part on-premises. Within a few months, he said, the department expected to have majority of its Exchange users in the cloud, and would eventually turn off its on-premises install.

Blackstock said the more the department tested out cloud software, the more ideas it had, as the shift away from traditional in-house IT accelerated.

“We believe we’re the leader in terms of cloud throughout the Western Australian government and we’re excited about being able to show all our stakeholders what the future can look like,” said Dimmick.

Delimiter is attending Microsoft Ignite on the Gold Coast this week as a guest of Microsoft.