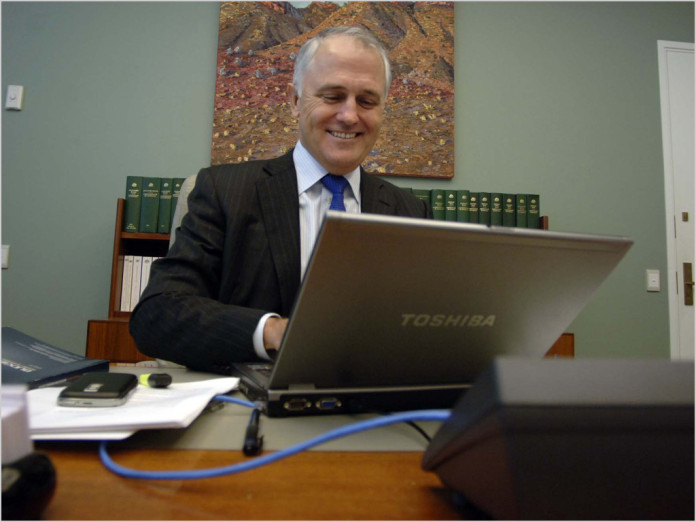 analysis Rudd & Gillard could work the Twitters. Abbott understood the need to engage digitally, if not the tech, the value or the full impact (and mistakenly thought one of his Ministers had invented the Internet). Even Howard got onboard the digital express with a few YouTube videos.

However, Australia has never before in its history had a digitally literate Prime Minister of the likes of Malcolm Turnbull.

This could mean nothing, or it could mean enormous change if the Australian Government is told to lift its game on digital engagement and treat technology as an integral part of designing and implementing government business rather than as a service to be called on when needed. Turnbull has already laid down a positioning statement in this area, stating in his inaugural media announcement as PM that:

We’ll see quite quickly which is true by Turnbull’s approach to several of the key planks of openness and digital transformation.

Key steps would include endorsing and progressing Australia’s membership of the Open Government Partnership, something agreed to by the Gillard government but was placed on the perpetual back burner by Abbott as he focused on closing, rather than opening up, government. I’d also expect to see a rethink of the government’s position on the Office of the Information Commissioner – an agency the Abbott government failed to legislate to remove but has been killing by degrees by cutting funding and refusing to replace Commissioners.

Another sign of change would be an elevation of the role of the Digital Transition Office, making more of its approaches mandatory and providing more teeth to the agency when dealing with big and slow moving Departments more interested in the status quo. This could include shifting the DTO back to the Prime Minister’s department, but with a direct reporting line to Turnbull that minimizes the obfuscation prevalent within that department at senior levels.

Other areas that could use attention include the open data space, which is run on a shoestring by Finance and could greatly magnify its impact with additional resourcing and mandates, and, of course, the NBN – Turnbull’s former responsibility as Communications Minister. A shift back to a FTTH approach, delivered more cost-effectively than the previous Labor model, would provide Australia with the infrastructure it needs for the 21st century and cement Turnbull as a visionary with Australia’s long-term future at heart.

There’s also many things that could be done at a micro-level within agencies to shift the reliance on corporate IT suppliers, 1990s systems and large, virtually undeliverable technology projects – many of which could be led by a revitalised AGIMO in association with the DTO.

Of course Turnbull may have other fish to fry, he has quite a lot to do to get the Liberals back to an electoral-ready position within 12 months, and if not re-elected much of the program above could find itself on the scrap heap of a new government that wants to do things differently.

However I am hopeful that we’ll see some true digital leadership from Turnbull whilst he is Prime Minister and potentially some real shifts in how government is delivered in Australia, to the benefit of all Australians now and in the future.