news nbn this morning unveiled plans to train a further 4,500 workers to join the ranks of its construction partners and the company itself, in a move which Communications Minister Malcolm Turnbull has hailed as a victory for a project he dubbed “The Coalition’s NBN”.

In a statement, nbn said its current construction workforce — its own workers plus that of contractors who are helping to deploy the network — currently sat at about 4,500. However, the company said, that number was set to “double to 9,000”, as it committed nearly $40 million for training and awareness campaigns that would help attract an extra 4,500 workers to the industry.

The company said that “flexible career options” will be explored by construction partners to attract late-stage career workers looking to balance their hours with lifestyle and family. Roles in coaching and training for new industry entrants will harness their experience and provide valuable expertise to younger workers setting out in the industry.

nbn also aims to attract school leavers and workers rolling off other construction jobs, building a range of training and re-skilling programs with tailored career paths. The intention is to expand the industry’s workforce to meet construction and activation requirements. Long-term opportunities will also be created as the network moves into ongoing operations and maintenance. 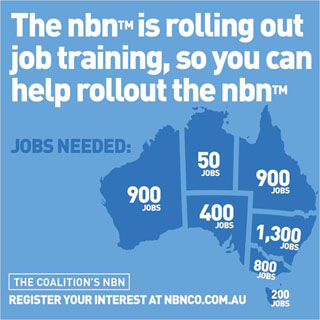 “To those with telco experience, there are options to use your skills or become a teacher and coach for the next generation of workers,” said Morrow. “To those thinking about what course or career to pursue, our partners are developing options that will include training and real job opportunities on the nbn™ network over the long term.”

nbn is signing agreements with a number of training organisations, comprising TAFEs and Registered Training Organisations, with providers in every major rollout region across the country. Further, a national nbn skills register will also be established to help record worker accreditations across the nbn network.

“Both the rapid roll out plan and the multi-technology mix means we need more people in our united partnership to connect eight million happy homes by 2020,” added Morrow. “Together we aim to bring high speed broadband to Australians to bridge the digital divide and create new opportunities for business, health, education and entertainment.”

“This is one of the largest infrastructure projects in Australia’s history and it’s certainly the most complex,” Turnbull said. “Each day the project is being rolled out on hundreds of work-fronts across the country so it’s vital we have enough people to roll out the network as we increase the pace of the rollout.”

“And it’s exciting to be a part of Australian history. This is a piece of infrastructure that will be around and maintained and augmented for decades, that will be vital to people’s lives.”