news Westpac’s top technologist has issued a sharp warning to the nation’s corporate, educational and political sectors, placing them on notice that Australia is not prepared for the ongoing digital revolution that will see many workplaces completely shaken up and jobs taken by computers.

Curran is regarded as one of Australia’s top corporate technologists. He currently leads Westpac’s technology operations but has almost thirty years of experience in IT and financial services in total, including senior roles at the Commonwealth Bank and Accenture. Last night the executive gave a speech (available in full in PDF format) at the University of Technology, Sydney, where he laid out his concerns about Australia’s ability to respond to ongoing changes in technology.

According to Curran, the future of IT in Australia is currently looking “very cloudy”. 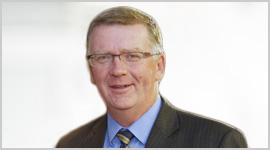 “I believe that without significant changes and action to increase the talent pipeline in Australia, we could miss out on the biggest opportunity for growth and prosperity that the world has seen since the industrial revolution,” he told the audience.

Some of the key factors Australia is currently missing when it comes to keeping up with technological change, according to Curran, is the lack of change in Australia’s education system, the lack of the nation’s ability to keep talent onshore, the lack of encouragement young people receive to engage with the creative side of IT, and the lack of a cohesive overall vision.

“Despite the fact we know that the jobs of today will be replaced by machines tomorrow, we still have the highest number of graduates in medicine and law. The number of law students has doubled in the past decade, with more than 12,000 graduates now entering a job market. Our best and brightest are graduating into these areas, particularly young women,” said Curran.

“I am a firm believer that everyone should follow their dreams and pursue the career they want, but why is it that smart year 12 students who aren’t sure what they want to do are more often than not funnelled into law and medical degrees?”

Curran pointed out that IBM’s Watson system had already demonstrated the ability to display the knowledge of a second-year medical student.

“Contrast this to IT graduates – since the first iPhone hit stores in 2007 we’ve seen a drop in the number of Australian students studying IT at university. In the last decade the number of young people starting IT courses at university has fallen by over 50 per cent; however there has been a 31 per cent growth in industry employment – which tells us there is broken supply/demand equation.”

“In short we have a talent drought at a time when we need skilled people – lots and lots of them – to power the digital revolution.”

Exacerbating the problem was that Australia often let talent slip away overseas, Curran said.
“I just recently returned from a trip to Silicon Valley where I met dozens of young Australian entrepreneurs who are making it in the United States after failing to get support in Australia. Or even worse, they didn’t even try to establish their businesses here but jumped immediately on a plane with their amazing ideas,” he said.

Curran said to address the problem, industry, government, the university sector and even parents needed to band together with a cohesive vision to deal with the coming technological change.

“As I said earlier, I think parents, other relatives, friends and teachers also play a big role in influencing the careers our young people choose to pursue. For example we must engage children in IT long before tertiary education, preferably starting in primary school. While our young students gain basic computer literacy, the focus is too much on using computers, and not enough on innovating through them.

We must also provide opportunities for girls to experience the creative side of IT, highlight role models and diverse career paths. I challenge each and every one of you to learn more about the jobs on offer in Australia’s IT industry and to share this information with the young people in your lives and connect with them.”

“But our first collective job is to have the same vision and be pulling in the same direction – a smart, innovative, and productive Australia.”

“Simply put, if we are to keep up with our global competitors, we had better step up our commitment to improve technology education, as these jobs are vital to just about every sector of the economy, not just financial services. I’m calling on business and industry to take the lead on this. We must act now to create a bright future for our economy and for the IT sector in this country.”

opinion/analysis
I strongly agree with Curran and recommend you read his full speech — he has basically nailed the challenges facing Australia with the coming smart economy. These are the kinds of arguments which need to be made to Australian policymakers, to help them understand the reality of the sharp degree of change shortly to hit Australia.