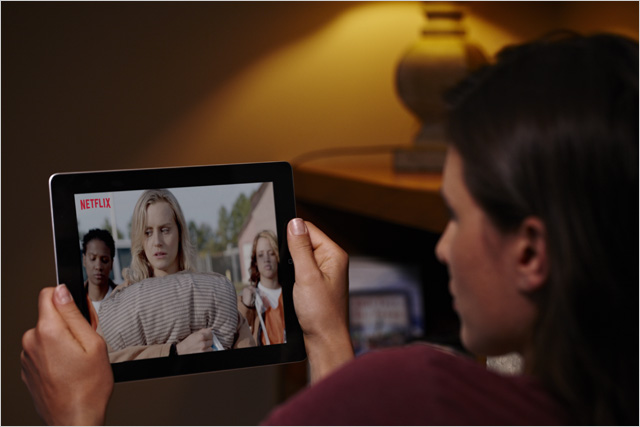 news Cut-rate broadband provider TPG last week claimed its new $69.99 Unlimited plan was the best value option in the ADSL broadband market, additionally claiming credit as the best provider in Australia for those looking to watch television online through the popular Netflix platform.

Last week the company revamped its broadband plan structure. The company now offers plans at $10 increments between $39.99 and $88, with additional options for bolting on voice telephony options. However, it’s the $69.99 Oz Chat bundle which the company said in a statement was the best on the market and a “game-changing bundle”.

The plan offers customers unlimited downloads and local, national, 13/1300 and calls to Australian mobiles, as well as including a fixed home phone line and a Wi-Fi ADSL modem, for the cost of $69.99 per month. Customers will additionally pay a $79.95 setup fee on a 24 month contract.

“In our view this is the best ADSL2+ with home phone bundle deal in the Australian market,” said TPG chief operating officer Craig Levy. “To our knowledge, there is no other provider that offers unlimited data with unlimited calls in Australia at this price point.

TPG was also keen to spruik its credentials as being a solid platform to watch the popular Netflix service on, which has been taken up rapidly in Australia since its launch earlier this year. The US company publishes an ISP Speed Index which ranks Australian broadband providers on their average download speed during the prime time viewing period.

For the months of May and June, TPG held the lead in the Netflix index, pipping rivals such as iiNet and Optus. Telstra has typically languished below other major broadband providers on the index.

“For two consecutive months, the Netflix speed index has rated TPG number one in Australia,” said Levy. “Our network architecture has allowed customers to benefit from the next generation of Internet applications such as Netflix, Facebook, Spotify and Instagram.”

“It was just a few years ago that the typical Australian household was using their broadband for web and email access only, but now it’s a case of connecting multiple devices in a home to a fast connection with no data caps” Levy said.

Putting the claims to the test
On the face of it, TPG’s claims largely do match reality. Of the four major broadband providers in Australia (also including Telstra, Optus and iiNet), Optus is the only other provider to offer an unlimited download plan, and that plan starts at $95 per month, although it does also include similar unlimited telephone calls. iiNet and Telstra do not offer unlimited plans, and their highest-rating plans, with a terabyte of quota per month, start at $89.95 and $115 per month respectively.

A smaller provider, Dodo, does offer an unlimited plan at $69.80 per month, including ‘Metro’ calls and telephone line rentalm as well as offering no fee for new 24 month contracts. Calls to 13/1300 numbers are not included, however, and customers will be charged extra if they require an ADSL modem. Exetel also offers an unlimited data plan for $59 per month, but customers will need to pay $20 extra per month to get unlimited local, national and mobile calls

When it comes to Netflix, TPG’s claims are largely warranted — the company held the highest rating on Netflix’s speed ratings in Australia in April and May, but the company lost the title in June to iiNet — a fact TPG did not mention in its media release.

Another issue relates to the actual use which customers may get from telecommunications services in 2015. With the cost of mobile phone use increasingly coming down, many Australian customers actively choose to place all of their calls through their mobile phone and not through a traditional fixed-line.

Customers who do not need a fixed-line phone will not benefit strongly from the unlimited telephone call features in TPG’s plans. The company does offer an unlimited stand-alone ADSL plan without a phone, but that costs only $10 less per month — $59.99, which would appear to show that the telephone call feature may not actually cost TPG much to provide, or alternatively that the cost of its $59.99 stand-alone ADSL plan is inflated for customers.

There are also other factors to consider when choosing a broadband provider. There are quite a few different types of broadband out there at the moment — ranging from HFC cable from Telstra and Optus to Fibre to the Node in some locations through companies such as iiNet and even Fibre to the Premises through the growing NBN footprint in areas. ADSL broadband may not be the best broadband your residence may be able to access. In addition, amongst its rivals, TPG has a poor reputation for customer service, with others such as iiNet enjoying a stronger long-term reputation in the area. Telstra has also attempted to make gains in customer service in recent years.