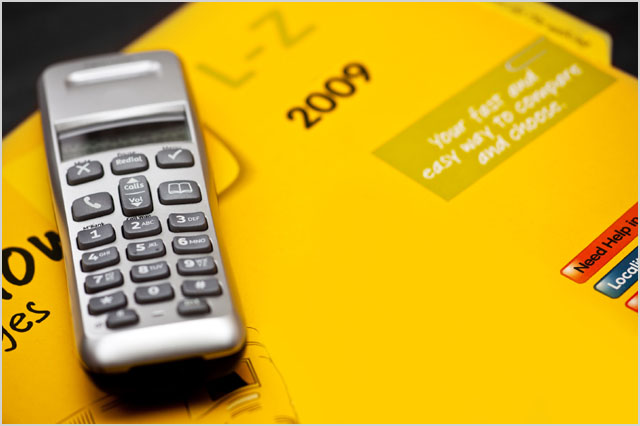 This article is by John Rice, Associate Professor in Strategic Management at Griffith University and Nigel Martin, Lecturer, College of Business and Economics at Australian National University. It originally appeared on The Conversation.

analysis Yellow Pages directories have been appearing on doorsteps across Australia in recent weeks. As often as not, they go straight into the recycling bin. In the world of the internet and e-commerce, the very notion of a book the size of two bricks being the source of valuable purchasing information seems plain silly.

Once directories like the Yellow Pages served a valuable need in most developed economies. They provided basic and inexpensive local advertising, especially for small businesses.

As the internet emerged as the preferred means of accessing such information, the potential for directory owners like Telstra to translate directory information into a valuable online business opportunity seemed promising. As is often the case in the unpredictable world of the internet, it was not quite so simple.

In January 2014, Telstra sold a 70% share of Sensis, its directories subsidiary, to a US hedge fund for A$454 million, only 2.4 times projected 2014 earnings. This is quite a turnaround from the A$12 billion value suggested to Telstra’s Board in 2005. At the time, Telstra’s chief executive Sol Trujillo declined to spin-off the business, suggesting Sensis (Telstra’s directory business) would be “bigger than Google”.

Indeed, with characteristic ebullience, Trujillo commented in November 2005, “Google Schmoogle”. Contrary to that prediction of sorts, since 2005 Google’s market capitalisation has increased tenfold, to more than half a trillion dollars. Among Trujillo’s many strategic mistakes, his misunderstanding of the relative potential values of Google and Sensis probably takes the cake.

It’s fair to say, however, that Trujillo was not alone in misunderstanding the radical changes in the economics of information over the last decade. These changes have completely upturned the value of directories businesses globally. The investors who bought Telecom New Zealand’s directories business in 2007 for $2.1 billion (at an earnings multiple of 13.6 times) at the height of the private equity bubble have done most of their dough.

The 2.4 earnings multiple on the recent Telstra sale suggests two things – that the business is still profitable, but that profits are expected to rapidly erode. How can we explain this sudden, anticipated and precipitous decline in the value of information available through directories like the Yellow Pages?

Most famously among the suite of work done by these economists was Akerlof’s 1970 paper “The Market for Lemons”. Like all great academic work, its beauty lay in its simplicity. In essence, buyers and sellers have “asymmetric” information. In the example in his paper, the seller of a used car knows if it is a “lemon”, though the buyer rarely does.

A consequence of Akerlof’s Lemons paper for sellers is that it made sense for them to signal to the market aspects of the quality of their products – by suggesting that they are selling “cherries” (great used cars) and not “lemons” (cars on their last legs). One simple way to do this was through advertising. This was especially useful where the buyer’s knowledge of the seller was limited, as would often be the case for the buyers from small businesses who advertise in directories like the Yellow Pages.

The steep decline in the generic, supplier-provided data that is the essence of Yellow Pages has been driven by a set of related phenomena.

First, sites like TripAdvisor have emerged to provide detailed and generally reliable information on services including hotels, tourist attractions, restaurants and the like. Importantly for Yellow Pages, sites such as these are becoming the first place for buyers to visit. As the quantity of collected reviews increase, the value of such sites increases greatly, as they provide a level of information on sellers that static directories cannot match.

Second, the costs of “searching” for information is in steep and terminal decline. Once, buying a set of golf clubs for the best price, for example, required a multitude of phone calls or, worse still, visits to stores with pushy salespeople. Now, finding the best price in the market is a few keystrokes away through Google.

This begs the question – can the Yellow Pages reinvent itself to be a new portal for information on sellers that will be valuable for buyers, and thus continue to attract advertisers? The answer is probably not. As a late mover into such information provision, it will have an almost insurmountable challenge to build an equivalent body of information in comparison to its competitors. More so, it will be a generalist in an industry full of specialists, the last site visited by buyers and thus the least valuable site for sellers to direct their advertising dollars to.

This makes the 2.4 times 2014 earnings paid in January for Sensis seem about right. Such a multiple suggests that this year’s Yellow Pages might be the last one to lob onto Australia’s front porches. If this is bad news for Sensis, it is good news for the millions of trees that will be saved!

John Rice is a member of the National Tertiary Education Union and the Australian Labor Party. Nigel Martin does not work for, consult to, own shares in or receive funding from any company or organisation that would benefit from this article, and has no relevant affiliations.