blog If you’ve seen the videos of Apple staff in one of the company’s flagship stores on the opening morning of sales for a new iPhone or iPad, you’ll know that it appears from all the singing, dancing and jumping around as though the stores are fantastic places to work. Well, they may be, but working there certainly doesn’t pay much. Last week, as first reported by the Financial Review, Apple Australia signed a new Enterprise Agreement with its retail staff. And the terms are quite harsh. You can view the entire agreement online here in PDF format, and here’s the new rates of pay which apply now, and those will come into effect from 1 November this year: 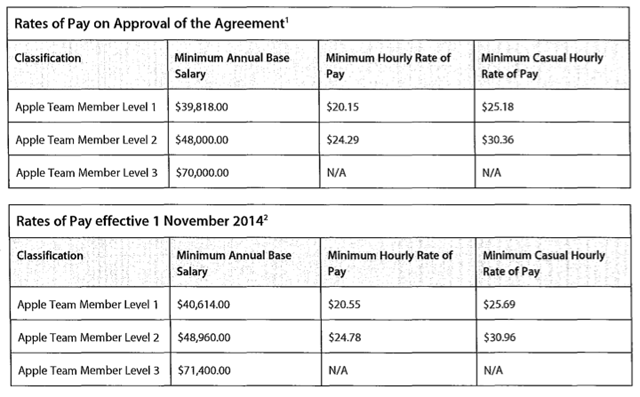 The rates will gradually rise over the next few years, but those rises will be below the rate of inflation. And as you can see, the starting hourly rate was not fantastic anyway. Even the salary for a Level 3 retail staff member (which could include a store manager) is not fantastic. Given the size, volume of sales and complexity of Apple’s retail footprint, as well as the extreme level of revenue Apple makes in Australia in general, you would have to say that most people would probably expect Apple Store employees to be making a little more. As it stands, the lowest-level employees will barely be making more than minimum wage. And that’s just not insanely great.