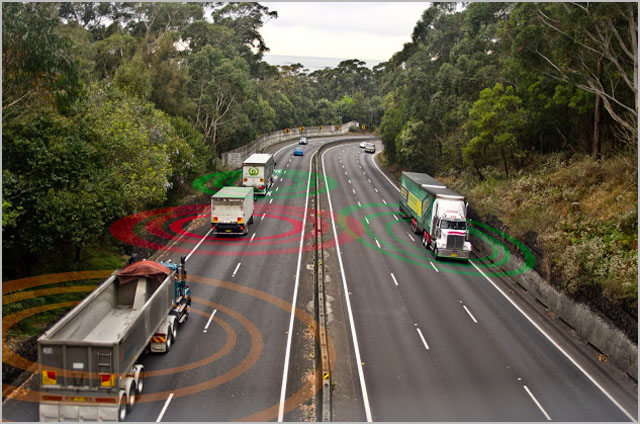 news The New South Wales Government has inked a contract with connected vehicle technology supplier Cohda Wireless, as part of a trial of so-called Cooperative Intelligent Transport Systems (C-ITS) which allow heavy vehicles to communicate directly with each other about their position on the road to help reduce road accidents.

The trial was announced in May 2013 and sees the state’s Centre for Road Safety collaborating with other groups in a bid to implement new technology to reduce truck accidents. At the time, funding of $1.7 million was announced for the project.

In a statement released today, Australia-based C-ITS vendor Cohda Wireless said it had won a contract to supply equipment for the trial, which will initially take place on a busy highway near the city of Wollongong.

Cohda Wireless will provide 95 MK4 anti-collision devices for the Cooperative Intelligent Transport Initiative (CITI) trial on a major road where most crashes involve heavy vehicles. The trial also aims to improve the flow of heavy vehicles in and out of Port Kembla, one of Australia’s busiest ports.

The first phase of the five-year trial will fit Cohda devices to 30 heavy vehicles for use on a 42km route from Port Kembla to the Hume Highway-Picton Road interchange near Wilton. The CITI trial, expected to start by the middle of this year, will ultimately use 85 Cohda on-board units and 10 roadside units. Cohda Wireless has signed the contract with Transport for NSW.

The NSW Centre for Road Safety’s Manager of Road Safety Technology, John Wall, said Cohda Wireless was chosen because it met the CITI Project’s rigorous technical specifications, based on US C-ITS trials. “Our decision was based on technical compliance and value for money,” he said.

”Our goal is to establish Australia’s first long-term test area for Cooperative ITS. The hard data we gather from vehicles up to 10 times per second as part of the project will assist us to measure the road safety benefits of this new technology. The route chosen for the CITI project has had a sad history when it comes to road safety, with 13 people losing their lives in the three year period leading up to 2011.

“Since then, the NSW Government has completed a multi-million-dollar upgrade to the road and its immediate environment. It is hoped that adding new safety technologies to heavy vehicles regularly using the route will further improve the safety for all people travelling in this area of NSW. We chose this route to model both built and natural environments, ranging from a dual-carriage freeway to a rural road, with country towns and a hill that descends from 320 metres above sea level to sea level in about six kilometres, before entering Wollongong, Australia’s 10th largest city.”

Cohda Wireless CEO Paul Gray said the CITI trial contract win was the latest endorsement of Cohda’s world-leading technology. “More than half of all vehicles involved in connected-vehicle trials globally contain Cohda equipment, so we’re proud to be part of this important Australian trial,” he said.

“The global automotive sector is on the threshold of widespread adoption of connected vehicle technology. Earlier this year, the US Federal Government announced it will start taking steps to mandate vehicle-to-vehicle communication technology for light vehicles while European manufacturers plan to install it in production vehicles from 2016.”

Cohda Wireless designs and sells Cooperative Intelligent Transport Systems that improve road safety by allowing vehicles to communicate with each other, as well as roadside infrastructure such as traffic signals and railway level crossings.

Using a dedicated 5.9 GHz frequency, data such as vehicle position, direction and speed is transmitted between Cohda-equipped vehicles and roadside infrastructure. Messages and alerts can be rapidly communicated to drivers connected by the system.

Cohda’s technology allows vehicles to see each other as never before, such as around a corner or over the crest of a hill, as well as sending warnings to drivers of a potential crash. The equipment can assist drivers by warning of imminent collisions with nearby similarly equipped vehicles; current speed limits; potential red-light violations (based on vehicle speed and traffic signal phasing); local road conditions, such as roadworks, fog, and water over the road; and approaching emergency vehicles.

The trial will also equip traffic lights to transmit signal phase and timing information to approaching vehicles – both the current state of the lights and how long before they change. Projected community benefits include improved traffic safety for all road users; reduced congestion and pollution; increased road network efficiency; shorter and more predictable journey times; increased efficiency of public transport systems; and better responses to hazards, incidents and accidents.

opinion/analysis
I can see absolutely nothing bad coming from this trial. It’s got a modest budget, it’s got an Australian vendor involved which is making strides internationally, and it’s being conducted on one of the most treacherous (for heavy vehicles) highways in NSW. I strongly expect that this kind of technology will eventually be introduced into all vehicles on Australian roads, especially as we transition to smarter cars of the style being pioneered by US electric car giant Tesla, and look forward to a safer road system for all Australians.