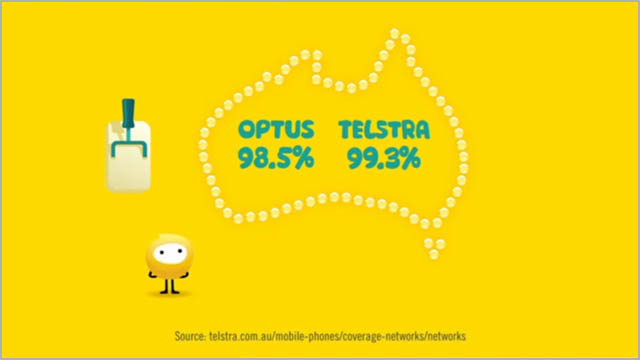 blog It was always a little hard to stomach the advertisements by Optus which appeared to claim that the coverage of its mobile network was almost equal to that of Telstra. While the SingTel subsidiary’s metropolitan coverage is pretty decent, if you leave the major city areas the different between the two quickly becomes apparent. That’s why we’re not surprised that the Victorian Supreme Court has backed Telstra’s legal claim that some of Optus’ recent advertising in the area was misleading. You can read the full judgement online here. A salient paragraph from the judge’s comments:

“… the figures of 99.3 per cent in relation to Telstra and 98.5 per cent in relation to Optus bear no resemblance to the actual Geographic Coverage of the respective networks. Moreover, the difference in Geographic Coverage between the 2 networks is far greater than 1 per cent. As may be seen in paragraph 37 above, Telstra’s mobile network covers an area nearly 2½ times greater in land mass than the mobile network of Optus.”

There you have it, folks — in black and white. A court has decided that Telstra’s network covers a geographic area nearly two and a half times greater in land mass than that of Optus. That’s a figure we’ll be pulling up regularly in future as Optus makes claims about its coverage.

None of this is to say, of course, that Optus’ coverage isn’t good enough for most Australians. Your writer has personally been a Telstra customer for some years, but at the end of this year, when my contract ends, I will be investigating Optus’ network and considering a switch. Optus has very good 3G and 4G coverage indeed in major metropolitan areas, which is where I tend to stay. But if you live further out, as the Victorian Supreme Court has stated, your mileage may vary.