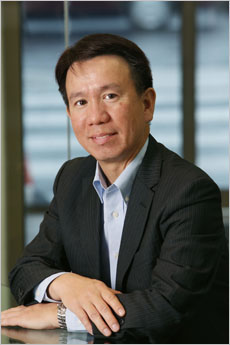 news The new managing director of diversified technology solutions group NEC has warned its Australian employees the group is facing “immediate profitability challenges” despite having a “very healthy” pipeline of contracts.

In late January NEC Australia managing director Alan Hyde unexpectedly resigned from his role leading the local operations of the Japanese company, with the chief planning officer of NEC Australia, Tetsuro Akagi (pictured), to take his place. Hyde will take up another as-yet-undisclosed position within Australia’s IT industry.

Hyde (see his LinkedIn profile here) was the first non-Japanese executive to lead the company in Australia, according to NEC. He was appointed in October 2010 after a career at SAP and PeopleSoft and oversaw a period of rapid expansion and corporate change for NEC in Australia, during which it bought the Technology Solutions arm of locally listed company CSG for up to $260 million and sold its Nextep broadband division to AAPT.

In an email sent to the company’s Australian employees last week, Akagi warned staff that the company had issues to face.

“In my initial advice last week, I mentioned that we are facing immediate profitability challenges whilst at the same time having a very healthy pipeline,” he wrote. “To meet these challenges, we need to work hard over the coming months reviewing all aspects of how we spend and invest our finances so when we start converting the pipeline into real opportunities we will be in a far better position to maximise the profitability of these successes.”

According to NEC Australia’s most recent financial report filed with the Australian Securities and Investments Commission (for the year ended 31 March 2013), the company made a net loss for that year of $33.6 million off revenues of $327.1 million. The company’s headline revenue picture in that period was better than its 2012 results, when it pulled in $243.4 million, but it made a bigger loss. In 2012 the company lost about $9 million.

The financial report noted that the net loss included costs related to significant items, such as $12.5 million relating to discontinued businesses, $9 million of restructuring and redundancy costs and interest on a bridging loan to facilitate the acquisition of subsidiaries of $3 million and a further $3.9 million relating to the write-off of deferred tax assets relating to business acquisition.

“Notwithstanding these major significant items, the result for the year would have been an improvement on [the] prior year result,” the company noted.

Of interest is the amount of liquid assets which NEC Australia had on hand as at 31 March 2013. At that point the company listed cash and cash equivalents of just $1.3 million (compared with $8.8 million the previous year), although it had a further $76.3 million of trade and other receivables, as well as $16.1 million in inventories.

In that year, NEC Australia had a negative net cashflow situation from its total operating activities of $12.1 million. The company’s receipts from customers were $375.8 million, while its payments to suppliers and employees were only a little less at $366.6 million.

In his email, Akagi also unveiled a significant restructure of the company’s workforce that he said would help the company build on its achievements of the prior year and “better position us to become a profitable company”, as well as encouraging staff career development and giving staff opportunities to advance.

The managing director has established a new sales and marketing group under Mark Williams, who was announced in August 2013 as NEC Australia’s director of enterprise and government sales. This division comprises the NEC Sales Group, as well as its Professional Services group. “With these changes, I believe that Mark Williams and his team will take strong actions toward converting the $2 billion sales pipelines into actual order intake,” Akagi wrote.

Akagi’s email noted that NEC’s director of marketing and business strategy Lynette Elliott had resigned, and that he was taking the opportunity to transfer NEC’s marketing team into this new sales and marketing group, with marketing now to report to the company’s chief technology officer Tasso Mangos.

“Infrastructure Services will continue to provide their services and support across the entire company. IT Business Solutions has been delivering business application solutions covering Business Intelligence, Customer Experience, ERP and Information Management as standalone projects but also as Application Managed Services solutions,” Akagi wrote. The new group will “now work towards expanding the talents and offerings within this business across the broader managed services customer base striving to make significant in-roads into our enterprise and government clients”.

A third division will be formed under the ‘Communications Solutions’ banner, and Akagi also announced several other minor changes.

Asked about the email to staff, NEC issued a statement noting that it was “well down the path to successfully transforming its business from a largely proprietary communications solutions company to a leading ICT solutions and services company”. “Its future pipeline and long term business forecasts are strong, and the company is well placed to overcome any short-term challenges and meet its goal of becoming a leading ICT services company,” the company said.

“Alan Hyde resigned to pursue another opportunity in the Australian ICT industry. NEC Australia will continue to direct the company with the vision to evolve into a leading ICT services business. The new Managing Director, Mr Tetsuro Akagi, has been working with Alan Hyde over the past two years supporting his vision, and was also on the Australian executive leadership team supporting Alan Hyde’s strategy.”

opinion/analysis
You may recall that when Alan Hyde resigned, I invited readers to contact Delimiter with tips about what was going on at NEC Australia. Well, I’ve received quite a lot of official and unofficial information, and I believe I have a relatively good picture of what’s going on at NEC at the moment.

Firstly, I don’t think Hyde is leaving NEC on a poor note; in fact, I believe the executive continues to be well-regarded by NEC’s higher-ups and is leaving to take on a genuine new opportunity within Australia’s technology sector. I don’t know what that role is, yet, but I’m sure we will soon.

Secondly, although Akagi mentioned “imminent profitability challenges” in his email, and there do appear to be some indications of this in the company’s most recent financial report, what we’re really seeing here is a company in rejuvenation and not decline. Everybody knows that the old-world legacy telephony and telecommunications business which used to be so strong for NEC is no longer the breadwinner it used to be, as the whole unified communications paradigm has changed corporate communications wholesale.

Hyde successfully unleashed the first wave of structural change at NEC, shifting it into more profitable and available markets courtesy of its CSG acquisition and shifting and divesting parts of the company which would be troublesome in future. There is no doubt that these changes have come with some short-term financial pain and that not everyone inside NEC is happy with it all. I’m sure some mistakes have been made. But the overall long-term picture is still good; Hyde’s decisions were the right ones and NEC Australia is moving forward.

In addition, lest we forget, the enterprise technology sector is a constantly changing one and NEC could not stay where it was. Many companies with pedigrees as venerable as NEC’s have fallen by the wayside amongst these shifting sands. NEC Australia still has a job of work ahead of it to transition to a more sustainable growth footing, but it is definitely on the right path and showing all the right signs. It will be interesting to see where the company is in two years from now; certainly most of its rivals are not quite so nimble. This agility, in my experience, tends to be a hallmark of Japanese firms, long-known for their ability to accept change.