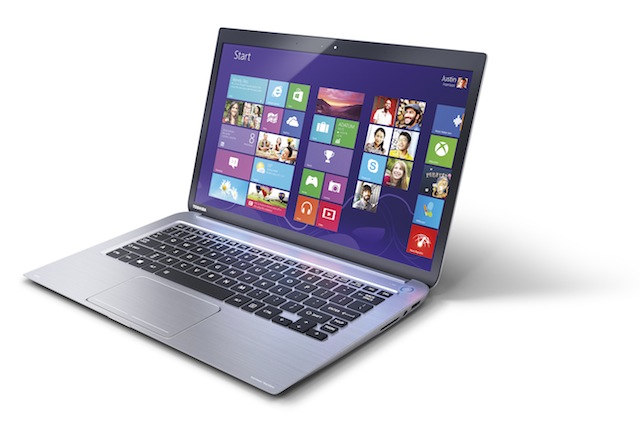 blog Laptop stalwart Toshiba has beaten Apple to the punch by offering an extremely high-resolution display in a slimline Ultrabook that has been clearly designed to appeal to buyers’ deep love of everything shiny. The new 1.21kg KIRA laptop offers a 13.3-inch ‘PixelPure’ display with native resolution of 2560×1440 at 221 pixels per inch (ppi), offering what Toshiba calls “a crisper, brighter picture without the detection of pixels”.

That’s not exactly a new concept, but it does put Toshiba one up on Apple, which has still not released its ultrabook-like laptop – its MacBook Air range – with the company’s high-resolution Retina Display.

Within the Apple stable, that display is only available on Apple’s heavier 1.62kg 13-inch and 2.02kg 15-inch MacBook Pro with Retina Display. Those models offer higher resolution than the Toshiba unit – 2560×1600 at 227 ppi and 2880×1800 at 220 ppi, respectively – but the difference may be accounted for by the units’ different aspect ratios (1.6:1 for Apple vs 1.78:1 for Toshiba). Here’s the mellifluous praise that Toshiba heaped on its MacBook Air killer:

Toshiba’s KIRA is derived from inspired engineering with precision in every detail…From its concept, KIRA has been crafted with design and performance at its core. KIRA’s unique construction from AZ91 pressed magnesium alloy combined with a honeycomb-base structure, means that KIRA is more robust than traditional aluminium alloy devices, whilst still remaining ultra-light.

Consensus has been that the high-powered graphics chips necessary to run Retina-class displays were too power-hungry to be squeezed into the MacBook Airs – but with Toshiba apparently having managed it, a similar Apple model can’t be too far behind. In the meantime, however, Toshiba’s laptop, which runs Windows 8 and has the option of a touchscreen if you like using your laptop like an iPad, is looking pretty sweet – and, at $1699 to $2199, is price-competitive with the 13-inch MacBook Pro Retina Display models, starting at $1649 and $1849 (the MacBook Air weighs 1.35kg and costs $1349 to $1549). Is the difference enough to sway you one way or the other?