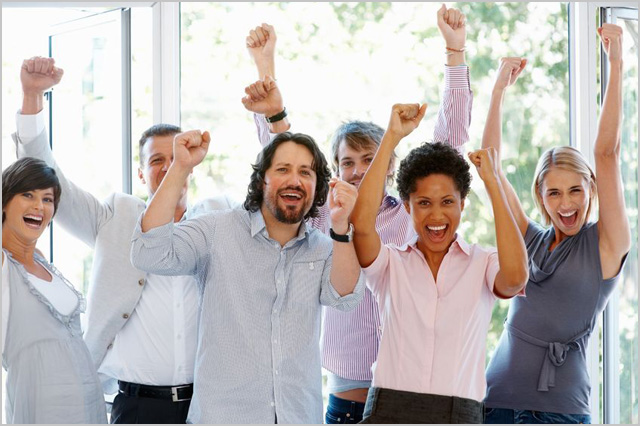 news A comprehensive audit of the NSW Department of Education and Communities’ wide-ranging Learning Management and Business Reform program, which involves a number of rolling upgrades of business administration software, is late across a number of areas and over budget, although not to the degree seen in similar projects around Australia.

The Learning Management and Business Reform (LMBR) program was established in 2006 to modernise the way the Department manages and delivers student enrolment and administration, learning management, support services, finance, human resources and technology services to schools, TAFE NSW and the Department’s corporate offices. At the time, it was expected to be delivered in two phases over eight years and to incur capital costs of $386 million.

The LMBR program is replacing some of the Department’s legacy software systems that are old, inefficient, costly and slow. Systems to be replaced during stage two of the program include two payroll systems (iSeries for schools/corporate and Lattice for TAFE NSW) and the schools finance system (Oasis).

Since the original business case, some additional legacy systems in the human resources area have been added to the scope of work. The LMBR program will also replace some manual administrative systems currently used by staff in schools, TAFE NSW and corporate offices.

However, according to a report published this month by the NSW Auditor-General (PDF), quite a few of the streams of work in the program are late in their delivery, and the program as a whole is substantially over budget.

During the 2012-2013 financial year, the report states, the project’s budget was increased to $394 million, as the department had spent $373 million of the project’s initial funds, representing some 94 percent of its initial budget, as well as incurring $36.6 million in recurring costs that year. The project’s total capital cost is now estimated to be some $458.7 million.

The project continues to have successes in certain areas. For example, the first ‘Human Resources and Payroll’ release was deployed to the TAFE Northern Sydney
Institute in July 2013. Staff received their first pay using the new system in August 2013 with subsequent pays also running successfully, according to the auditor.

The ‘Human Resource and Payroll’ release was deployed to the TAFE South Western
Sydney, Sydney and Hunter Institutes in October 2013. The Department advised the auditor’s office there were no significant issues with either deployment.

And the deployments were significant, involving 19,029 staff being paid across 14 weeks, including 8,289 staff from four institutes in the most recent pay cycle. 5,470 leave applications were logged in the period tracked, with 5,078 approved and 392 waiting for approval with no errors.

In addition, a ‘Student Wellbeing’ package was released to 229 schools in September 2013 and the third version of the ‘Budget and Planning Consolidation’ package was released in October 2013. The Department advised the auditor’s office there were no significant issues with either of these releases.

However, the audit report also noted that a number of other programs of work had been pushed back significantly — in some cases by up to a year. The following table details the revised delivery schedule for stage two of the LMBR program: 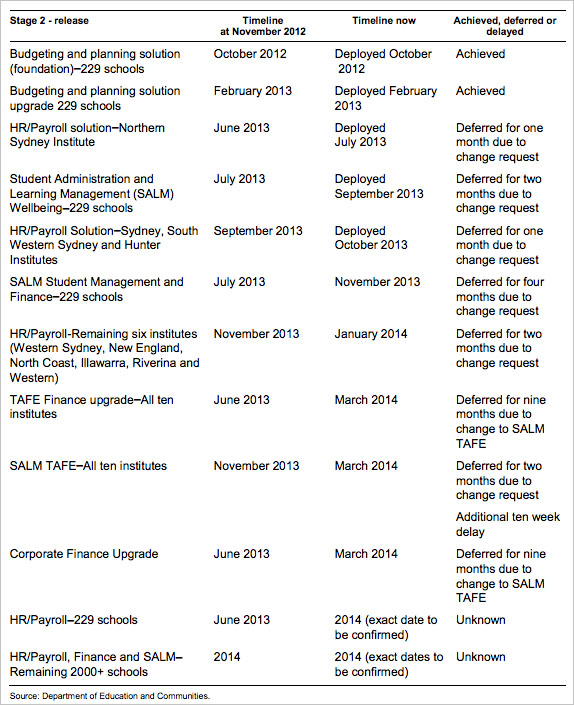 This really surprises me. This is the sort of project which usually goes wrong — in some cases very wrong (see Queensland Health’s payroll upgrade project) — in Australian State Governments. It appears that the NSW DEC has been able to keep this one on track — which is a credit to its IT management. Congratulations all round.