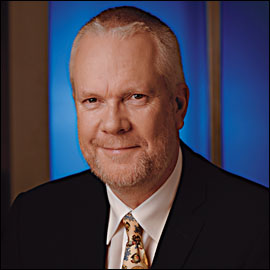 news NBN Co’s three new non-executive directors all have potential conflicts of interest between their financial investments in prior employers or their current responsibilities and their new posts on NBN Co’s board. But a significant gulf has emerged between the way the different executives are tackling the issue.

Communications Minister Malcolm Turnbull yesterday announced that he had appointed three senior executives to be non-executive directors sitting on the board of the National Broadband Network Company. The executives are Internode founder Simon Hackett, former Telstra BigPond and OzEmail chief Justin Milne (pictured right), and the construction industry’s Patrick Flannigan, who has previously been NBN Co’s head of construction and is current chief executive of Utility Services Group.

Unfortunately, due to the nature of their previous and current employment, all three executives have potential conflicts of interest with their new roles at NBN Co.

In October it was reported that Milne still held 305,000 Telstra shares, worth around $1.5 million at the time. The shares would place Milne in a direct conflict of interest with respect to NBN Co’s negotiations with Telstra, as any fluctuation at all in Telstra’s share price would be likely to have a significant impact on Milne’s shareholding.

Similarly, Hackett still holds around around 3.75 percent of stock in iiNet stemming from the acquisition of Internode by the company in December 2011. As the company is currently worth around $1.01 billion, that would Hackett would be holding around $37.9 million in iiNet shares. Hackett previously owned about double that amount of shares, but sold around half several months ago.

The nature of Flannigan’s potential conflict of interest with NBN Co is different in nature, but still exists. Flannigan is chief executive of a company he founded, Utility Services Group, offers construction services to the utilities (for example, water and gas) and telecommunications sectors across Australia, and would potentially be in the bidding for NBN construction contracts.

Aside from Flannigan’s prior connection with NBN Co, there are also other connections with the company. NBN Co’s former head of operations, Steve Christian, who led NBN Co’s network operations in the first three years of the company’s existence, was appointed to USG’s board in January this year (PDF), and the company also appointed at that time former NBN Co general manager Trevor Hoggan as program director of its broadband (telco) operations.

The three new directors appear to have taken divergent paths when it comes to managing their potential conflict of interest situations.

Milne, who has the most obvious conflict of interest issue, is believed to be planning to sell his shares with Telstra. It probably does not hurt the executive’s finances that Telstra’s share price is currently at a five year high of $5.14. Milne departed Telstra in March 2010. Some of the executive’s shares may date back further. The last time Telstra’s shares were at their current levels was in early 2008, with their real highs coming in the several years from mid-1998 of above the $9 level.

Asked about the issue yesterday, Hackett noted that he had committed to departing the iiNet board at the end of this month, a move which will end his formal involvement in both iiNet and Internode. The executive pointed out that he had sold down half of his iiNet shareholding only a few months ago. He has no plans to change the status of his remaining iiNet shares at this time.

Flannigan declined to comment when asked about the issue by Delimiter. However, it is believed that the executive’s potential conflict of interest is not likely to become a major headache for the executive in his work with NBN Co, due to several factors. Firstly, USG’s area of specialisation lies more in the utility sector than it does in the telecommunications sector. Secondly, if the company did pick up NBN construction work, it would likely to be one level removed from the major NBN contracts NBN Co has awarded so far — USG would likely act as a subcontractor to much larger contracting firms.

With respect to Milne, with the sale of his Telstra shares, Milne will be likely to avoid most perception of conflict of interest to his NBN role. With respect to Hackett and Flannigan, both are regarded as individuals of high integrity within their respective sectors (as is Milne, to be clear). Consequently, it is believed very likely that both would recuse themselves from any direct discussions held at NBN Co specifically regarding the companies they are still financially associated with.

opinion/analysis
Do I believe there are potential conflict of interest issues here with the three appointments Malcolm Turnbull made yesterday to the board of NBN Co? Of course there are. All three executives have long histories in their respective sectors and are associated with companies NBN Co deals with. It’s impossible to hire board directors with experience in this area without these kinds of issues coming up.

However, I believe the impact of those potential conflicts of interest has been minimalised.

The biggest problem was Milne’s Telstra stake. Any movement in Telstra’s share price — any movement at all — would have financially benefited or harmed Milne. And you can be certain that any major announcements NBN Co made with respect to its future agreements with Telstra would have moved Telstra’s share price. I commend Milne, who is one of the most respected individuals in Australia’s broadband sector, for selling his Telstra shares and exiting that conflict of interest situation entirely. We’re truly seeing a commitment to public service here from Milne — congruent with the executive’s character as a man of integrity.

As long as Hackett recuses himself from any direct discussions NBN Co has regarding iiNet specifically (especially contractual discussions), I don’t see a huge conflict of interest issue with the Internode founder’s iiNet shares. iiNet is a customer to NBN Co, after all, not a supplier. iiNet’s success with the NBN will also be NBN Co’s success. And of course the relationship between retail ISPs in general and NBN Co is harshly governed by the ACCC. Hackett won’t have much room on the board to get favourable treatment for iiNet anyway due to the standardised agreements in place.

Then, too, Hackett has been appointed to NBN Co’s board precisely, among other reasons, to ensure that the interests of NBN Co’s retail ISP partners are well understood by the company and to balance out ex-Telstra executives Ziggy Switkowski and Milne. Hackett has an organic and historic interest in keeping Telstra in check and driving competitive outcomes in Australia’s broadband sector. Selling his shares or not selling his shares wouldn’t be likely to change Hackett’s opinions and approach in that regard.

I would note, however, that I would expect to see Hackett refrain from any direct involvement with iiNet or Internode as a company representative from this point on. Despite the fact that he stepped down from executive responsibilities at Internode some time ago, Hackett has still been more or less acting as an informal representative of the company he founded since. The executive needs to ensure he is careful from here on out not to explicitly represent Internode in public in a way that implies he has any direct executive control at the company.

One final point: I would also note that there is, in practice, a huge difference between Hackett selling $37.9 million worth of iiNet shares and Milne selling $1.5 million of Telstra shares. Hackett is a substantial shareholder in iiNet. Any attempt to sell his shares would need to be managed very carefully, lest it destabilise the company’s position on the ASX. Milne’s situation, in comparison, is a lot easier to manage. He was never a substantial shareholder in Telstra, and the sale of $1.5 million worth of Telstra shares is little more than a blip. In financial terms, it’s very hard to compare the two situations, as they are very different. Milne could sell his shares without thinking about the broader impact or preparing for it. Hackett cannot.

Flannigan’s position is a little more tricky. There is no doubt that his expertise in the construction sector is the reason the executive was brought back to NBN Co to sit on its board. However, there is also no doubt that NBN Co will be signing contracts with companies who will be dealing with USG or its rivals. Flannigan will need to be a bit careful in his engagement with NBN Co.

However, again I don’t see a huge problem. If you look at its customer list, Flannigan’s company, Utility Services Group, mainly has customers in the utility sector, not in telecommunications. USG also isn’t one of the giants of the construction industry (at least, not yet). And, like Milne and Hackett, the executive is a man of high integrity and likely to be quite aware when he is in a potential conflictual situation.

What we’re seeing here, apart from the gross conflict of Milne’s shares in Telstra (a direct supplier to the NBN) is a fairly usual minor potential conflict of interest situation with a board. It’s common for a ‘web of relationships’ to exist around board directors — that’s one of the reason they’ve been hired. But executives in these positions have usually had enough experience to know when they’re potentially crossing a bad line. That’s why Milne is planning to sell his shares. And Flannigan and Hackett are certainly wise heads. I doubt they’ll be doing anything at NBN Co that will get them in hot water.