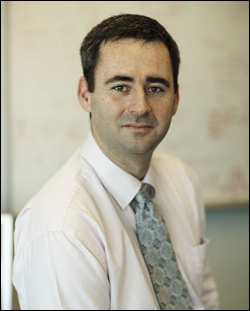 If you were following Australia’s Internet service provider industry back in the mid-2000’s, you would have seen a constant string of high-profile names of ISP executives appearing in the technology media. Giants like Internode’s Simon Hackett, iiNet’s Michael Malone, Netspace’s Stuart Marburg, Macquarie Telecom’s David Tudehope, AAPT’s Paul Broad and others were all quoted regularly in the media, and it’s not hard to see why: These executives were all engaged in revolutionising the state of broadband in Australia and wresting control of the telecommunications industry away from Telstra.

However, you would have also seen several other names frequently mentioned; names associated with a company that didn’t have a retail presence in the same way as the ISPs just named, but was nonetheless fundamental to their success.

ISPs like Internode and iiNet were never going to make much money from purely reselling Telstra services, with the extremely slim profit margins possible on Telstra’s network. With this in mind, in order to successfully take broadband market share away from former telco monopolist Telstra, the nation’s clutch of mid-tier ISPs needed to build their own network infrastructure.

This involved putting several key planks of infrastructure in place. Firstly, the ISPs needed to deploy their own ADSL gear in telephone exchanges. This allowed them to immediately offer higher speeds than the incumbent would, as well as achieve better profit margins. However, they also needed to build links between those exchanges and their backhaul networks, so that they could pump their new ADSL links full of data from the greater Internet.

For this second task, many of the ISPs turned to several of the best independent fibre network builders in Australia’s history: PIPE Networks founders Bevan Slattery and Steve Baxter.

PIPE started as an Internet peering exchange; offering ISPs the chance to link their networks together in key datacentres and save money on Internet traffic costs. However, before long the pair had actually started deploying fibre-optic cables in Australia’s streets, as they realised there was a huge pent-up demand for extremely high-speed broadband services from other telcos, corporates and government departments.

By 2009, when the company was bought by retail ISP TPG, PIPE Networks had become one of the most valuable little telcos in Australia, making its founders multi-multi-millionaires through listing on the Australian Securities Exchange and operating a network of many hundreds of kilometres of fibre cable.

Today it’s doing even better; it has over 1,400km of cable in Brisbane, Sydney, Melbourne, Perth and Adelaide, as well as a 6900km submarine cable from Sydney to Guam carrying huge amounts of international data traffic.

The company’s founders, Baxter and Slattery, have also diversified further into the nation’s technology sector. Baxter, one of the ISP industry’s long-term veterans, has founded several companies, worked at Google’s headquarters in Mountain View, and is currently acting as an angel investor, having backed many Australian technology startups and having formed the River City Labs tech startup incubator in Brisbane.

Then too, Slattery has been a regular commentator on NBN issues over the project’s life. Along with Internode’s Hackett, the PIPE founder has consistently criticised the project on specific aspects that he felt needed substantial improvement.

Communications Minister Malcolm Turnbull has consistently stated, both in Opposition and in Government, that he is seeking candidates with actual experience deploying fibre telecommunications networks to serve on NBN Co’s refreshed board.

If the Member for Wentworth is being honest about that objective, it would be hard to look further than the extremely dynamic, experienced and influential founders of PIPE Networks. Bevan Slattery and Steve Baxter both have deep experience in the commercial and technical aspects of building and operating fibre networks in Australia — in an industry where virtually nobody else does. Both also have deep links to the wider digital economy and IT industry.

And what’s more, they have the deep and abiding respect of virtually every party in Australia’s telecommunications industry.

Last week I wrote that if If Malcolm Turnbull were serious about making sure all Australians quickly get access to affordable, high-speed broadband, there was one man he must consider appointing to the board of NBN Co: The entrepreneur who was instrumental in bringing Australians broadband in the first place: Simon Hackett.

Well, let’s add two more names to the list. Bevan Slattery and Steve Baxter are more than qualified to help bring the NBN project back on track. It would be criminal to ignore the deep well of knowledge and experience that exists in their heads.