This article is by Rod Tucker, director of the Institute for a Broadband-Enabled Society at the University of Melbourne. It was reviewed by Philip Branch, senior lecturer in Telecommunications at the Swinburne University of Technology. It originally appeared on The Conversation.

analysis The above claim on the NBN has been made many times by the Opposition, including by shadow communications minister Malcolm Turnbull.

The government admits the roll-out has slowed but insists the project will be completed on schedule by 2021. The delays, it argues, are partly due to the longer-than-expected negotiations with Telstra to get access to Telstra’s infrastructure, and partly due to problems caused by the discovery of asbestos in some Telstra ducts and pits.

When contacted by Election FactCheck, Turnbull’s office disputed the government’s reasons, arguing that the interim agreements with Telstra were reached at an early stage and construction could have started sooner. Turnbull’s spokesman said a faster roll-out had been hampered by other problems, such as difficulties with workforce mobilisation.

“Despite its chronic inability to meet any construction ramps to date, the NBN continues to make the construction ramp-up steeper, with no indication how it will meet the additional construction capacity needed,” Turnbull’s spokesman said.

(You can read the full response from Turnbull’s office here.)

But let’s look at the data to see if a 20 year rollout is likely. The graph below shows NBNCo’s projected or planned total number of premises passed by fibre, wireless and satellite (blue line) and the planned number of premises passed by fibre only (orange line) from 2010 until the scheduled completion date of the NBN in 2021. (When a premises is passed, an NBN service is available, but the service is not necessarily connected). Note that some of the planned numbers have been revised by NBNCo last year, since the Company’s original planning document was released in 2010. 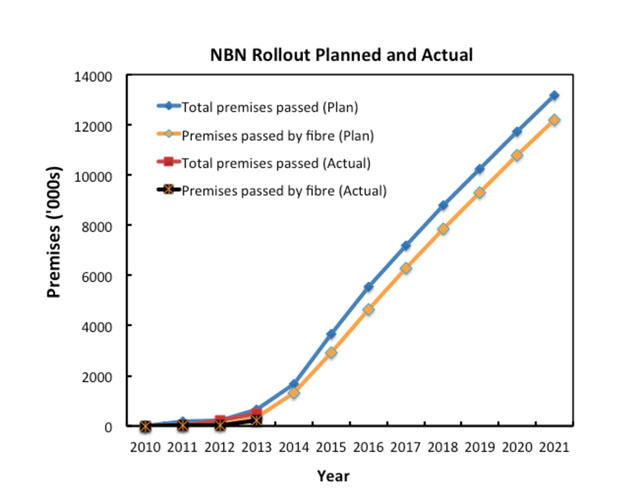 It is clear from the graph that NBNCo’s roll-out plan allows for a relatively slow ramp up from 2010 to 2013, with an acceleration of the roll-out in 2014, 2015, and 2016, as more skilled workers come online. Because the roll-out is still in its early stages, it is difficult to see, on the scale of this graph, the difference between the planned and actual numbers.

If we take into account the fact that NBNCo is indeed ramping up its roll-out rate, and accept the government’s assurances that the reasons for the delays to date are now taken care of (which the Opposition does not accept), then it may be reasonable to expect that the orange line on the graph above will have the same shape as shown in the figure below (but be moved about six to twelve months to the right). 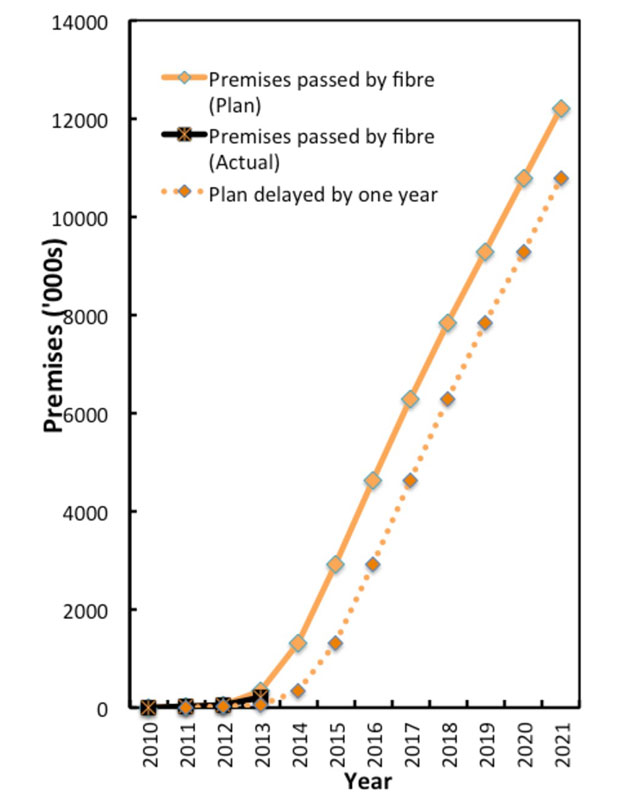 What is clear from this discussion is that in a project lasting more than 10 years, early-stage delays do not necessarily imply a major deviation from the longer-term plan. Any attempt to project the initial activity in a major project like the NBN into the future is a fraught process.

Verdict
Predicting the future on big infrastructure projects is inherently complex. Deviations from the plan in the early stages of large projects do not automatically overturn the original timeframe. The 20-year time to completion quoted by Tony Abbott seems to be some kind of rough estimate or guess, based on unclear assumptions. It is unlikely to be correct.

Review
The analysis in this article appears quite sound.

If you take the claim literally, on the current rate completion, it will not take 20 years as Abbott says: it will take much longer. However, as the author also points out, projects like this involve an increase in the rate of roll-out; that is, an acceleration in deployment. Modelling the time taken to completion requires assumptions to be made as to the size and timing of this acceleration.

If no further problems emerge similar to the discovery of asbestos in Telstra ducts and NBNCo’s planned acceleration in deployment is achieved, then the nine years suggested in the article is a more plausible estimate than 20 years. Of course, these are substantial assumptions, but the article shows they are not unreasonable.

The key point is in the last paragraph, which says that “Any attempt to project the initial activity in a major project like the NBN into the future is a fraught process.” Without providing specific information as to his underlying assumptions, Abbott’s claim of 20 years has to be regarded as questionable. – Philip Branch

Rod Tucker was a member of the National Broadband Network Panel of Experts, appointed by the Rudd government in 2008 to assess proposals for and provide advice on the NBN. You can read more about that panel here. Philip Branch does not work for, consult to, own shares in or receive funding from any company or organisation that would benefit from this article, and has no relevant affiliations.

This article was originally published at The Conversation. Read the original article. Image credit: NBN Co.