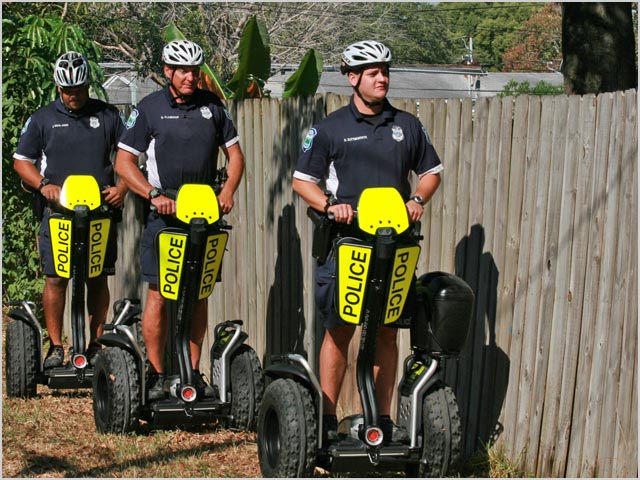 news The Queensland Police Service yesterday revealed that it would kick off what it said was the first Australian trial of the Segway personal transportation vehicle in pedestrian areas, to test their suitability for police operations.

In a statement, Police Minister Jack Dempsey said the three month trial would be undertaken by general duties officers at Brisbane’s South Bank and the Cairns Esplanade Police Beat.

“New technologies such as segways need to be tested to determine how they can enhance policing and provide better service to the community,” Dempsey said. “Segways have already shown to be useful tools for police overseas and it is great to see Queensland police testing how segways will benefit the community. Segways will allow police to cover large distances faster and more frequently. The areas chosen both have a high population of pedestrians and people enjoying the outdoors making these areas perfect to test how effective segways will be.”

Police Commissioner Ian Stewart welcomed the trial and said he would be interested to see if the personal transporters met the operational expectations of the QPS.

“Segways are used by many police departments and law enforcement agencies in the USA and Europe as an alternative mode of transport for operational officers,” Stewart said. “Police officers taking part in the trial will be comprehensively trained in the safe use of the transporters and the model used has been specifically designed and equipped by the manufacturer for policing applications.”

Stewart said QPS would be the first law enforcement agency to trial the equipment in Australia and the Service looked forward to testing its capabilities in two heavily populated areas. “It will be important to assess the response times and to gauge the community acceptance before we know if the equipment would be a viable option,” Commissioner Stewart said.

The use of Segways is believed to still be illegal in many areas of Australia, and their use is not popular as a consequence. However, Queensland recently became an exception, allowing Segways on public paths from 1 August this year.

opinion/analysis
Cool! We totally live in the future :)

Image credit: Segway. Note: The image above is a stock image and not a photo of the Queensland Police