news The National Broadband Network Company this afternoon confirmed it had met its revised targets for the rollout of its fibre network to the end of June, revealing that at the end of last month it had connected a total of 207,500 premises; a figure in the middle of its target range of between 190,000 and 220,000.

The company had previously been targeting a rollout figure of 341,000 premises by the end of June this year, but in mid-March it revised that figure down to between 190,000 and 220,000, stating that it had suffered a delay of about three months in its construction timetable as some of its construction contractors had progressed work “at a slower rate than forecast”. In a new statement this afternoon, NBN Co revealed its fibre network had in fact passed some 207,500 premises by the end of June, and it had more than 70,000 premises using live services.

“These results are pleasing because they demonstrate that the steps we put in place in March to accelerate the rollout have been successful,” said NBN Co chief executive Mike Quigley in the company’s statement. “They provide us with confidence that NBN Co is on track to deliver fast, reliable and affordable broadband to every family and business in Australia over the remaining eight years of this decade-long build.”

“They also show that NBN Co, together with its industry partners, has the capacity to overcome the challenges inherent in rolling out Australia’s largest national infrastructure project.”

However, there are questions as to whether the company’s statistics are accurate. NBN Co stipulated in its statement that it was using what it described as “the accepted industry definition of ‘Premises Passed'”, consisting of premises passed by an active telecommunciations network. However, the company also noted that this measure included “those complex premises” that would receive services over the NBN outside of “standard order lead times”. This means that of the premises passed by the NBN, not all will immediately be able to order NBN services from retail ISPs.

“Premises such as blocks of apartments and large office blocks have always provided challenges to companies rolling out telecommunications networks. The key difference between the NBN and other networks – such as hybrid fibre coaxial (or cable TV) – is that we will provide NBN services to every home and business that orders a service,” Quigley said. “We’re currently working with our delivery partners to do just that. Steps include the work orders we have placed with Downer EDI Engineering Pty Ltd, Daly International Pty Ltd, ISG Management Pty Ltd and Universal Communications Group Limited to connect multi-dwelling units (or “MDUs”) to the NBN.”

However, the company appears to have concealed the full extent of the issue. The Financial Review reported this afternoon that of NBN Co’s total of 163,500 ‘brownfields’ premises (where NBN Co is replacing Telstra’s copper network with fibre), about a third — 55,000 — could not actually connect to the network yet. 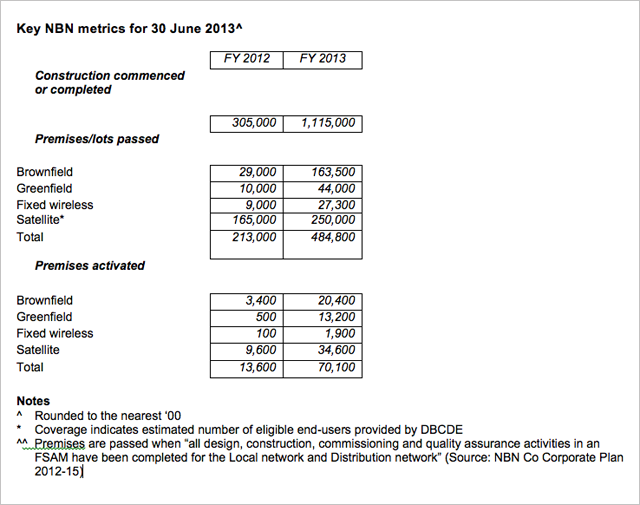 In March, NBN Co said it had taken a number of actions to speed up its rollout, including directly managing the Northern Territory rollout to ensure the delivery of fast broadband to the NT and to allow contractor Syntheo to focus on WA and SA; training and employing additional specialist telecoms workers (“fibre splicers”) to help recover lost time in the rollout of the network; and NBN Co’s fibre construction contractors were to increase their investment in equipment and manpower as well as technology to accelerate on-the-ground design and planning.

According to  Quigley in March, other major deliverables for the NBN’s fibre network were tracking well. ”We have more than 40 telephone and internet service providers selling NBN packages to consumers,” he said at the time. “The rollout of the transit network is on track. We are having no problems with the availability of equipment including the manufacture of fibre, and the implementation of the complex IT systems (OSS/BSS) that underpin the running of the network, also continue to be delivered as expected.”

opinion/analysis
I want to note a few things here. Firstly, it should be apparent by now that even though NBN Co has hit its targets as outlined in March, that the media and Opposition will still savage these results regardless. NBN Co’s own media release contains an obvious angle — the definition of “premises passed”. I have no idea why the company provided such an obvious angle of attack in its own publicity document, and I have no doubt it will be coming under heavy fire as a result over the next day or so. But then, that’s just par for the course for the NBN at this point.

What I’m really interested in from the results is not actually the fibre connections, which are growing quite rapidly, but actually the wireless component of the results. If you look at that section of the results, it would appear that NBN Co and its prime wireless contractor, Ericsson, have done almost nothing in the area of wireless over the past year, adding a mere 18,300 premises in a whole year.

I knew there were delays associated with the wireless network, and there’s certainly been plenty of articles out there about communities rejecting NBN Co’s locations for its wireless towers. But holy incompetence, Batman! Is it really possible that Ericsson has only been able to deploy fixed wireless to a mere 27,300 premises in the two years since the Swedish vendor signed a $1.1 billion contract with NBN Co to roll out the network? Is this really the same vendor which was able to deploy Telstra’s Next G 3G network around Australia in just a year? What the hell is going on here? We’re talking about a billion dollars. Surely Ericsson can do better than this? I’ll be asking NBN Co and Ericsson for comment on the matter.

Any other issues in the results which stick out to people?