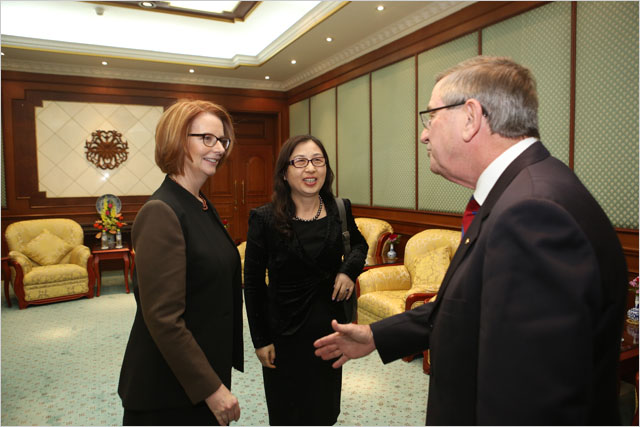 blog We wouldn’t blame Julia Gillard from avoiding discussion of Huawei during the Prime Minister’s current trip to China. After all, there’s been quite a bit of embarassing argy-bargy between the current Labor Federal Government and the Chinese networking giant over the past few years, culminating in NBN Co banning Huawei from competing for sensitive National Broadband Network contracts on security grounds. However, in a move we can only describe as “brave”, Gillard has spent time with Huawei’s global chair Sun Yafang during the trip. Huawei’s media release:

Beijing, China, 9 April 2013: Huawei’s global Chairwoman Ms Sun Yafang has held a meeting with Australian Prime Minister Julia Gillard in Beijing, China, where she confirmed Huawei’s long-term commitment to the Australian market. During the meeting, Ms Sun told the Prime Minister that Huawei was encouraged by the Federal Government’s ‘Australia in the Asian Century’ White Paper, saying Huawei looked forward to playing a significant role in promoting opportunities in business and education between the two countries.

Ms Sun said the Prime Minister encouraged Huawei to seek opportunities to grow its commercial business in Australia, and to continue to forge partnerships with Australian companies and educational institutions.

“Huawei is committed to forging long-term business, community and education partnerships that will benefit the Australian people and the economy,” Ms Sun said. “We’re working with the Australian ICT industry to provide opportunities for local businesses to integrate into our global supply chain, giving Australian companies the benefit of involvement with Huawei’s advanced technologies and access to enhanced export opportunities.”

The Chairwoman noted that the establishment of a local Board of Directors in Australia had been a great success for the local business, adding that Huawei was looking at replicating the model in other markets around the world. Huawei Australia has grown from a company of just 20 staff in 2004 to over 700 staff today, over 85% of which are locals.

Ms Sun said Research and Development was critical to Huawei’s ongoing success, adding the company would continue to seek partnerships with Australian universities and businesses to expand its technology and innovation programs. The Chairwoman confirmed with the Prime Minister that Huawei would launch a Scholarship Program in 2013, bringing Australia’s brightest ICT students to the company’s Shenzhen Headquarters to conduct a three-week training and work experience course.

It’s great to see ongoing dialogue between the Australian Government and Huawei at the highest levels. One suspects that the company’s government blacklisting Down Under may not last forever. FYI the picture above is of Gillard with Sun and Huawei Australia chairman John Lord.