This article is by Karl Schaffarczyk, law student at the University of Canberra. It first appeared on The Conversation and is replicated here with permission.

analysis “The NBN could have disastrous results for the local [music] industry.” At least, that was the view of peak recording industry body the International Federation of the Phonographic Industry (IFPI) and local bodies, the Australian Recording Industry Association (ARIA) and Music Rights Australia, in a recent report.

But why would Australia’s National Broadband Network (NBN) be problematic? The Age, The Register and other media describe the claims of IFPI and ARIA as “bleating”. The joint claim of the recording industry bodies is that without government and internet service provider (ISP) intervention to curb piracy, the NBN will destroy the music industry.

But this is just business as usual for the content industry. These claims are continuing a long tradition of claiming every technological innovation spells disaster, if not the end, of the industry.

Some 30 years ago the then-Motion Picture Association of America president, Jack Valenti, described the VCR as the movie industry equivalent of the Boston Strangler. Even high-speed dubbing and blank tapes, digital audio tapes, Napster, Grokster and countless other technologies have been named as threats over the years. Despite these threats, the recording industry is still with us.

Not only is the recording industry still with us – in Australia, at least, it is doing well. IFPI and ARIA report impressively strong growth (up 40%) in Australian digital music sales, and a small increase in overall revenue. In an Australian context, the sales data in the graph below clearly shows that while sales of physical recordings are declining (dark green), those losses are being offset by the growth in sales of digital recordings. 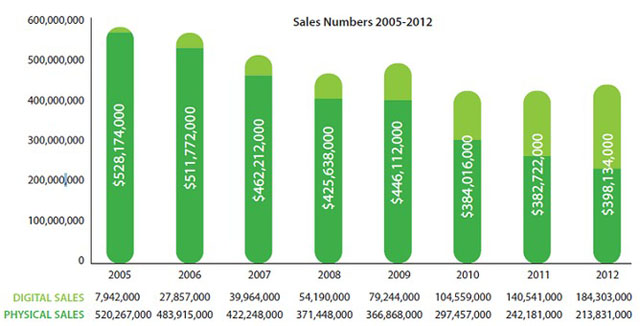 They want ISPs to become “content gatekeepers” by either preventing consumers using services that permit file-sharing, or implementing enforcement protocols such as the American six strikes Copyright Alert System, which warns (and then reduces the internet speeds for repeat offenders) users who engage in illegal file-sharing on the internet. Australian lawmakers have so far been reluctant to make this happen, and a major issue in the recent High Court case of Roadshow Films v iiNet was iiNet’s unwillingness to be the gatekeeper for Hollywood.

ARIA is now holding out for the current Law Reform Commission review of copyright and the digital economy to deliver a strong[er] copyright framework.

Alarmist claims about the NBN tell us more about the music industry and its attitude to consumers than any inherent faults in consumer behaviour. It is widely accepted that people download music and other content due to the failure of the market to deliver what the consumer wants. This failure takes the form of insisting that old business models such as selling CDs and tapes in discrete markets be continued – while refusing to embrace the new digital culture.

Granted, the marketplace for legally-downloadable music has developed over the last few years and we now have online music stores and streaming services, but until now the online offerings have been inferior in many ways. Saddled with Digital Rights Management (DRM), small repertoires and high prices, many people had instead resorted to file-sharing services.

The logic in the IFPI report is attractively simple: if people can download songs from the internet using peer-to-peer (P2P) networks, and those people are then given faster internet speeds as provided by the NBN, they will download much more music. More downloads means fewer sales, and fewer sales means disaster for music distributors.

While there will always be people who prefer to “freeload” and not pay for content, the impact of Apple’s iTunes store has demonstrated that many pirate downloaders will happily convert to paying customers, but that iTunes has a negligible impact for existing content purchasers. What this shows is that consumers want a simple interface from which they can pay for their music.

The music industry has long insisted on “digital locks” (“DRM”) to prevent the sharing of legally-bought digital music. But technological compatibility and digital rights management have also been a strong deterrent for consumers. Why pay for a song that only works on one or two music players? It has been shown that DRM-free content – such as songs which are sold without any form of digital lock to prevent file-sharing – actually drives sales.

Price is another important factor in consumer needs. For decades when buying technology, Australians have been paying higher prices than our overseas counterparts. This applies to online and offline music sales too. On Apple’s iTunes store, the standard price for one song is US$1.29 for Americans, yet the price for Australians is almost double that, at A$2.19 for the same song.

Timing and geographic segmentation is yet another issue for which the content industry fails to deliver to consumers. This is most obvious in the film industry, where Australians often need to wait months or years in some cases before a released film hits our screens. The music industry is not immune to this either, and it is still standard practice to release all but the biggest names in music one market at a time.

While it is a long bow to draw to claim that piracy will disappear if content became cheap, DRM-free, easy to buy, and simultaneously released worldwide, it is clear that these are important factors driving online piracy, and fixing these matters will significantly reduce demand for infringing product. If the music industry is scared of a piracy-driven disaster occurring because Australians have high-speed broadband, it means they believe the only thing saving their bacon is the lack of bandwidth available in most homes.

It also means that despite being aware of what drives music piracy, the industry intends to continue treating its customers with contempt. Frances Moore, CEO of IFPI, summed up industry attitude to consumers in last year’s Digital Music Report:

The truth is that record companies are building a successful digital music business in spite of the environment in which they operate, not because of it.

The time has come for the music industry to find common ground with consumers, not do business in spite of them.

Karl Schaffarczyk does not work for, consult to, own shares in or receive funding from any company or organisation that would benefit from this article, and has no relevant affiliations. This article was originally published at The Conversation. Read the original article.