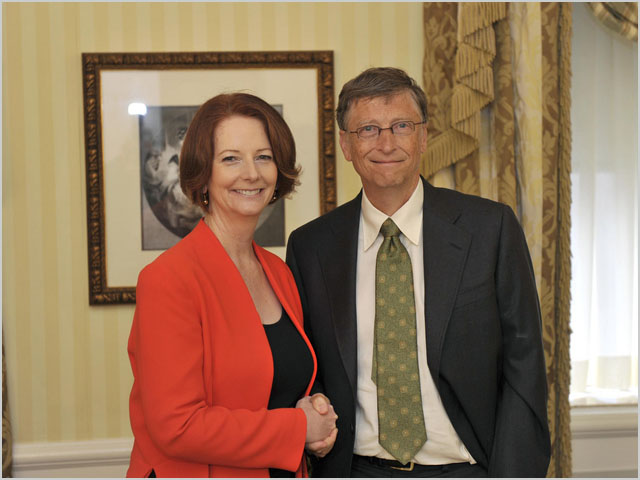 news Prime Minister Julia Gillard has hailed knowledge and the technologies used to create and share it as being the key factor determining Australia’s future economic success — even beyond the resources sector — as she met with key figures from Australia’s technology sector and set in place key ‘Digital Economy’ strategies for the nation’s future.

Over the past several decades, as the global technology sector has gained maturity, most of Australia’s politicians have ignored the sphere, preferring instead to focus on developing industries such as the resources and tourism sectors, which have been more valuable historically. However, over the past several years, the Labor Federal Government has increasingly talked up the worth of the technology sector, especially associated with the development of its National Broadband Network project. Over the weekend, Gillard added to weight to that trend.

“The commodity most precious in the 21st century, more valuable even than iron ore, is knowledge,” Gillard told attendees at a forum at the University of New South Wales held to connect the Prime Minister with the technology sector. “The way we create and share knowledge will be a key determinant of our success in the Asian Century.”

“It seemed not so long ago that thinkers like Barry Jones were counselling us to be ready for the digital future. That future is here. It is well and truly here. In a range of visible and invisible ways, it’s already integrated into all of our lives, and into our nation’s economy. Economic activity directly related to the internet contributed $50 billion to the Australian economy in 2010, but the indirect effects are just as important. These effects aren’t captured in GDP figures but they’re worth an extra $80 billion a year.”

The Barry Jones referred to by Gillard is a Labor politician and broadcaster who was the nation’s Science Minister from 1983 to 1990 — a role in which he presided over the creation of the Questacon National Science and Technology Centre in Canberra, as well as the growth of the Commonwealth Scientific and Research Organisation and other similar initiatives.

The Digital Economy Forum was attended by major Internet companies such as Google (whose local MD Nick Leeder penned a column on it this morning in the Financial Review newspaper), Facebook, and PayPal, as well as software giants such as Microsoft, and other local businesses active in the technology sector such as the Commonwealth Bank of Australia, Australia Post and Virgin Australia. A number of technology-related startups such as Shoes of Prey, Nicko’s Kitchen and Birdsnest also attended.

In her opening remarks to the conference, Gillard said nothing was more important to the success of Australia’s digital economy than building the NBN. “The NBN is what the economists call a ‘public good’,” the Prime Minister said. “One of those projects like the Transcontinental Railway, the Sydney Harbour Bridge and the Snowy Scheme that creates a wealth of indirect benefits beyond those that can be calculated on a spreadsheet.”

Gillard said the construction of the NBN would help increase Australia’s productivity as well as opening up new markets and industries. “Because if we can’t compete on quantity with developing nations that can provide ten times the number of workers for the same price, we will compete on quality,” Gillard said. “With quality skills, and quality infrastructure, we’ll be better able to take advantage of the opportunities that come our way.”

In her closing remarks to the forum, Gillard made a number of commitments stemming from suggestions made during the proceedings.

Firstly, the Prime Minister acknowledged there was “a short-term issue” around the availability of technology skills in Australia. “It’s been raised around the room, it’s not something that we can let drift, because when people point to enrolment patterns now in our universities there is a real reason to be concerned, that in the relatively short term we will not have available to us the skills sets we need, the software engineers for example,” Gillard said.

To address this, Gillard said she would ask Minister for Skills and Tertiary Education Chris Evans to meet with some members of the group to further investigate the issue.

Secondly, Gillard noted opinions from industry that the Federal Government, as a major employer, had a responsibility to model behaviour in the area of teleworking. With this in mind, some members of the industry group would be asked to meet with the secretaries of Federal Government departments and with the Public Service Commissioner to discuss government leadership in the area.

Thirdly, Gillard noted that there had been a great deal of discussion in the room regarding the onset of the new generation of cloud computing technologies. “A lot of the contributions really have been about the power of cloud computing. But also the need to spread understanding about what this mean, particularly for small and medium-sized enterprises,” Gillard said.

“So I will ask [Communications] Minister Conroy to bring people together in a discussion about that. I think it needs to be a genuine government-industry partnership, and for us to embark on a cloud computing strategy so that we can capture in terms that are going to make sense to people, what is very powerful about this and do it in a synthesised way. So if Minister Conroy could do that I’d be very grateful.”

Lastly, Gillard said it was her opinion that the Federal Government should broaden its Cyber White Paper process, which is currently examining cybersecurity challenges for the public sector, to examine the ‘Digital’ space as well.

“There was the discussion about skills and ecosystems and how we leverage all of this to sustain the development of the digital economy and the transformation of our economy generally. The sort of skill settings that requires, the innovation settings that that requires,” Gillard said. “I think we should try and bring that to the table for a broadened look through this White Paper and we’d not only take what’s happened in the conversation here today into that process, but we’d be calling on individuals around the room to be making some direct contributions to that process too.”

The news comes as a number of major companies have recently kicked off substantial datacentre investments in Australia, with a number of them citing the development of the NBN as a stimulant for investment in the space. In June, for example, global cloud computing player and retailer Amazon confirmed that it had added an ‘edge’ location in Sydney to speed up the delivery of content to Australians, confirming a deployment model which was the subject of speculation some 12 months ago. In addition, other companies such as HP, NEXTDC and Metronode have recently launched major new datacentre facilities locally, as has US giant Rackspace.

In addition, Australia’s technology startup scene has recently seen a flurry of activity, with tens of millions of dollars being invested in total in local startups over the past six months and a strong technology incubator scene flourishing in cities such as Sydney and Melbourne and rapidly developing in cities such as Brisbane, Perth and Adelaide.

opinion/analysis
I view Gillard’s meeting with a number of Australian technology sector leaders as being reminiscent of the meeting which US President Barack Obama held with executives such as then-Apple chief executive Steve Jobs, Facebook founder Mark Zuckerberg, then-Google CEO Eric Schmidt, Oracle CEO Larry Ellison and others in early 2011. It appears as if similar issues were discussed, with Jobs, for example, pushing Obama to stimulate technology skills in the economy.

However, there’s one difference between the two meetings.

Unlike the Obama administration, which, although it is aware of the technology sector, has been quite hands-off with it, the Gillard administration and the Rudd camp before it, has a very strong strategy of providing for Australia’s future in this area, courtesy of the National Broadband Network.

Sure, the NBN isn’t a panacea for the technology sector; there are many other things which could be done by the Federal Government to boost the technology industry in Australia, such as tax incentives for technology startups and venture capitalists, infrastructure incentives for major datacentre operators and skills investment for everyone. Hell, the Federal Government should even be talking to Chinese vendor Huawei to attract it to list in Australia and host more of its operations here, although of course the Government doesn’t seem to be very good at talking to Huawei, in general.

However, if there is one thing which governments should always be focused on doing, it’s on providing underlying infrastructure so that the private sector can build on top of that infrastructure. And that’s exactly what will happen with the NBN.

Right now, infrastructure is a significant constraint on Australia’s technology and knowledge sectors. Information workers, after all, deal with information, and when uploading and downloading that information from each other is such a slow process, things are going to be inhibited. The better telecommunications infrastructure Australia has, the more companies will build on that — technology startups, datacentre builders, higher-order software as a service players and content companies such as film and video game studios.

I’ve been following Australia’s technology scene for the better part of a decade (and I have read much of the backstory before that), and there’s never been an administration which understands the tech sector and invests in it to the same degree as the current Gillard Government, which is based on the work which Communications Minister Stephen Conroy did with then-Prime Minister Kevin Rudd in the two-ish years from 2007 through 2009.

The fact that the Prime Minister is pushing this kind of Digital Economy development to such a strong extent is exactly what the technology sector needs right now — and I can only view it as a wonderful downpour of political attention after the drought years from 1980 through 2007. Let’s hope it lasts long indeed and that the Coalition finds a similar focus if it wins Government next year.

Note: Microsoft co-founder Bill Gates was not at the Digital Economy Forum. It appears that Gillard met with Gates recently in the US in his philanthropic capacity relating to his work to end polio. However, we couldn’t resist headlining this article with this picture of Gates and Gillard. It also brings to mind a somewhat controversial comment made by Tony Abbott during the 2010 Federal Election campaign. Image credit: Office of the Prime Minister.