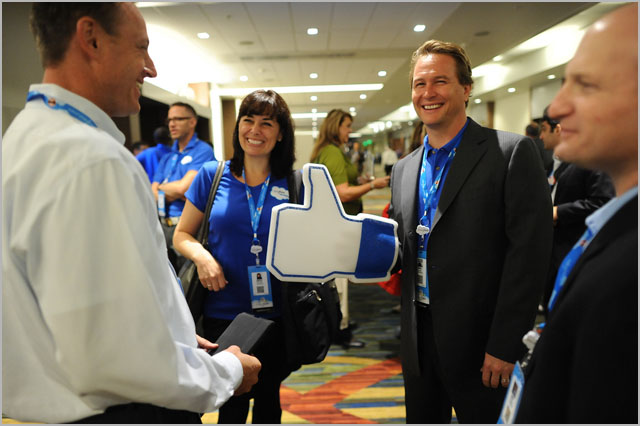 But the part which we were quite fascinated with was the fact that the bank was already using the Twitter-like corporate social networking tool Yammer. Now, with the Salesforce.com tool added on, a number of the bank’s employees are running both. NAB asset manager Dean Puhalovich (we recommend you click here for the full article):

Now, from a certain perspective, this move makes sense. Yammer is basically designed to be a secure, enterprise version of Twitter, that can run behind the firewall and allow the kind of constant loose connection and dialogue between corporate users that Twitter has been so successful at in the public sphere.

In comparison, Chatter is less of an independent social network and more of an add-on to Salesforce.com and other tools. It lets people subscribe to updates to anything that’s being updated on internal corporate apps. Want to know when someone else in your sales team touches base with a client who you also deal with? That’s Chatter. Want to give your broader organisation insights into what you’re working on, to help spread corporate knowledge? That’s Yammer.

It does make your writer wonder, however, whether all of this corporate social networking stuff is getting a bit overkill. I mean, how many internal status message updates can one corporate employee handle before they start to go a bit nuts? I guess we’ll find out over the next few years. My prediction is that not all of these platforms will survive — or at least they’ll become much more integrated with each other, so that each employee doesn’t have half a dozen “social” dashboards to log in to every morning … plus their email, voicemail, instant messages and so on. At some point, actual work has to be done as well, in between all the social “work”.