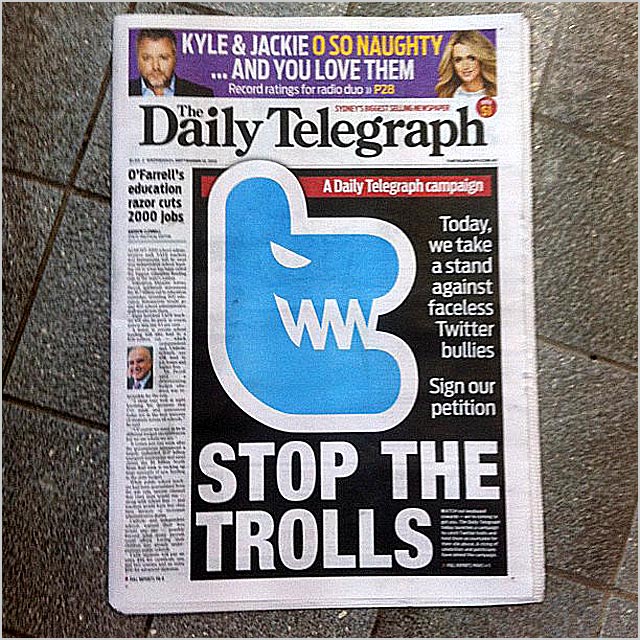 This article is by technology commentator Geordie Guy. It first appeared on his blog and is licenced under a Creative Commons licence.

opinion Yesterday’s Daily Telegraph features a call to action – an Internet petition to stop trolling (the media definition of any offensive or deliberately hurtful behaviour online, not the traditional definition). This is both terrible journalism and falling for a trap.

In the last couple of weeks offensive online behaviour has taken a bit of limelight. First Charlotte Dawson, a host of a reality TV show, was hospitalised seemingly because she was driven to harm herself by a round of online abuse. A few days later rugby league player Robbie Farah was also abused online with taunters targeting the fact he recently lost his mother to cancer. Classy.

In the wake of the Farah incident NSW Premier Barry O’Farrell publicised that he’d be talking to the Australian Federal Police, which is odd – I was unsure why a premier needs to intervene. I started to become nervous when I saw the Prime Minister had arranged a meeting with Farah to ostensibly discuss “what can be done about the trolls”.

The bottom line of course is that nothing can be done. Or rather that it’s already been done. Subjecting someone to an outpouring of abuse on Twitter is an offence under S474.17 of the Criminal Code Act 1995 – a law which was originally designed to prohibit nuisance phone calls by regulating behaviour on “a carriage service”.

Later law and definitions include the Internet as a carriage service so the three year holiday in Long Bay available to anybody who makes offensively harassing and threatening calls is also available to anyone who mounts a Facebook campaign. At the state level there’s also various pieces of legislation, typically designed to prohibit stalking, that make that behaviour illegal. Courts can and have made orders that people not contact other people online or use services that would enable them to do so as a result of them not being able to do it lawfully and civilly.

The consternation and anxiety about social media companies not cooperating with law enforcement and police is similarly unfounded. Twitter, Facebook, Google et al. routinely remind us that they will always hand over private information to enable law enforcement action on the proviso that it is done properly. Quick phonecall asking for a pseudonymous user’s identity? No. Court order, subpoena, summons or warrant? Absolutely.

So why is the media doing Kermit arms and howling about “trolls” complete with online polls and government cooperation when the problem (to the extent that people being mean on the Internet is a public policy problem at all) is already solved? Why doesn’t the government simply say “guys, I know it’s hurtful but it’s already illegal and instruments of law enforcement permit the police to do their job as it stands.”?

The answer is the national security inquiry.

Yesterday the Attorney-General Nicola Roxon took to YouTube to address outrage at one part of proposals under review at a national security inquiry, in particular the data retention ideas. Her video message – which permitted no comments, feedback or replies and even included a technical measure to forbid it being embedded on another site that did permit discourse – was trying to pour cold water on community outrage about extensive new powers police are seeking.

The attempts to ram through powers like “streamlining” warrants (read: making it easier for police to just access people’s private lives) have hit several snags on the way through where submissions to the inquiry as well as community consultation and testimony have broadly condemned the proposals as unnecessary and draconian. Effectively the government has a serious problem where law enforcement and spy agencies want almost unlimited power and they’re faced with a community backlash that police powers are sufficient as they stand. What the government needs to win, is community outcry for a problem to be fixed and for the government to show its hands are tied.

The “troll problem” is a gift-wrapped non-problem that the media has seized on and caused the waves to part between the government and a sweeping range of new police powers. The prime minister meeting Robbie Farah, the communications minister unleashing a spray on talkback radio about how Twitter won’t co-operate unless warrants or orders are produced, this is all reversing the momentum against the power grab. “But we can’t catch terrorists” wasn’t working so now the conversation is “but we can’t catch mean people”.

I’m profoundly disappointed that the media fell for it. Not fact checking that something wasn’t already illegal before lobbying for its demise under Australia’s online regulatory landscape was guaranteed to be seized on and used by a Government addicted to banning things and passing laws to regulate the Internet. In the coming months we’ll see the vexation move from a celebrity attended media campaign into the inquiry’s consideration, into the bureaucracy, then on to the lower house. I’m hoping that the Opposition will tread on it, but nothing’s certain.