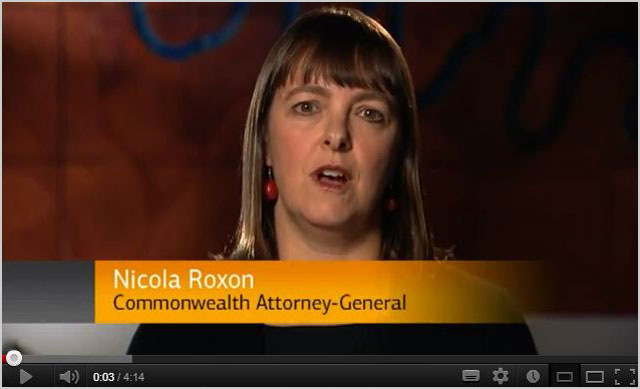 news Citizen lobbying organisation GetUp! has published a strongly worded rejection of a YouTube video published by Federal Attorney-General Nicola Roxon yesterday relating to the Government’s current data retention and surveillance proposal, describing Roxon’s video as “partisan spin” and highlighting what it said were inaccuracies in it.

The Federal Attorney-General’s Department is currently promulgating a package of reforms which would see a number of wide-ranging changes made to make it easier for law enforcement and intelligence agencies to monitor what Australians are doing on the Internet. For example, one new power is a data retention protocol which would require ISPs to retain data on their customers’ Internet and telephone activities for up to two years, and changes which would empower agencies to source data on users’ activities on social networking sites. Another power would see it made illegal for Australians to refuse to decrypt their data, and warrants are also to be simplified and streamlined.

Yesterday, Roxon took to YouTube to make an impassioned plea to Australians not to believe some of the criticism which is being spread about the package, which has been widely slammed by a large number of interest groups as being over the top and akin to a “police state”. Part of the video was a direct response to an ongoing campaign by GetUp! on the issue, which has urged its members to oppose the proposal.

However, in a new statement published late yesterday, GetUp! rejected Roxon’s criticism of its campaign on the issue.

“GetUp has been engaged in a dialogue with the Attorney’s office for the last two weeks and on 6 September offered to give her the opportunity to participate in a live and unedited Question and Answer session on our website,” the organisation wrote. “We offered to give her an opportunity to make her case, and take questions from GetUp members who want to know more about these proposed changes.”

“GetUp made it clear that during this live broadcast the Attorney would be free to clarify her position on the changes and GetUp’s campaign against them. The offer was made to facilitate this from our Sydney office, or from her Parliament House or Electorate Office at her convenience.”

“Without having responded to that offer, the Attorney has claimed that GetUp had refused to distribute her response amongst our members. As an independent movement, we are not willing to distribute partisan spin to our members without the opportunity for those ideas to be challenged. Our democracy is best served by a robust debate, and our representatives should welcome the opportunity for a deeper engagement and be willing to answer questions from a concerned public.”

GetUp! also directly addressed several of the claims Roxon made in her video, relating separately to the Attorney-General’s view that the proposed data retention and surveillance package would not see the content of communications such as email and telephone calls stored – only the metadata associated with such communications, such as the time sent and the sender and recipient – and also Roxon’s view that the proposal contained no avenue for law enforcement authorities to demand passwords be divulged.

“The Discussion Paper is by no means clear on the issue of whether or not the Government is proposing to store the content of communications,” GetUp! stated. “The Government has stated that it had no intent to store this, and we have no reason not to believe that. However there are direct references to the storage of the content of communications in the paper, including one on page 28 which states the following: ‘Access to communications content and data plays an important role in protecting the community against threats to security and serious criminal activity.’”

In addition, GetUp! wrote, in a practical sense, the data retention and surveillance proposal did actually contain provision for passwords to be handed over, as it proposes making it a criminal offence not to decrypt data for law enforcement authorities on demand.

“There is no difference between forcing people to decrypt their private live communications, and asking them to hand over their passwords,” GetUp! wrote. “The Government is using the technical and complex nature of these proposals to confuse and mislead ordinary Australians. Under this proposal, the Government could force Australians to hand over keys to unscramble their private encrypted communications which would allow them to see exactly what they are doing online. This could be whilst accessing sites like Facebook, Twitter or your Internet Banking. If you refuse to cooperate with this process, you could be thrown in gaol.”

In general, the package has attracted a significant degree of criticism from the wider community over the past few months since it was first mooted. Digital rights lobby group Electronic Frontiers Australia has described the new powers as being akin to those applied in restrictive countries such as China and Iran, while the Greens have described the package as “a systematic erosion of privacy”.

In addition, yesterday The Australian newspaper reported that about a dozen Coalition MPs had bitterly complained about the data retention proposals in a passionate party room meeting, with Opposition Leader Tony Abbott being urged to directly pressure the Government on the issue.

opinion/analysis
It seems pretty clear that GetUp! is factually correct in its comments yesterday and that Roxon has not been as up-front on this issue as she could have been. As I wrote separately on Delimiter, while Roxon does not go so far as to state bald-faced inaccuracies in her YouTube video, in general, it is quite misleading – especially on the issues which GetUp! highlighted, such as the nature of the content which the data retention scheme would store, as well as criminalising the refusal to decrypt data.

If Roxon was truly interested in having an open and transparent public discussion with regards to this package of policies, the Attorney-General would be well-advised to take up the offer of lobbying organisations such as GetUp!. While it does have political leanings in certain directions, GetUp! is not a specifically partisan organisation – it doesn’t owe allegiance to either major sides of politics, or even the Greens. It is precisely this kind of independent activist organisation which Roxon needs to convince if the Attorney-General wants the Australian public to believe that her package of data retention and surveillance proposals is above board and not the sinister Orwellian population control scheme which so many people are making it out to be.

In addition, Roxon’s invitation to GetUp! to distribute her video to its members is, frankly speaking, offensive. The video only provides a very limited point of view — Roxon’s point of view — on the extremely wide-ranging package of data retention and surveillance proposals which the Government is currently putting forward, and doesn’t do anything to answer GetUp!’s concerns about them. Force-feeding GetUp!’s members such “spin” would indeed run contrary to its mission statement.