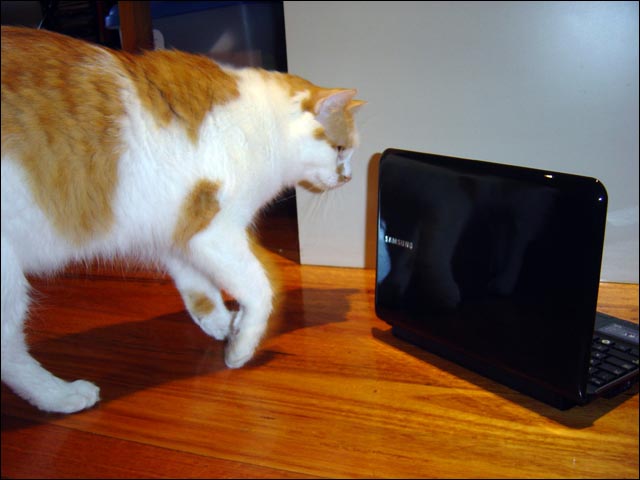 The N220 is the latest netbook from Samsung to be launched into the Australian market. It comes with 3G mobile broadband access built-in and is being sold directly by Optus with a 3G connection included on a monthly plan.

The case is solid, with a high gloss “sophisticated crystal finish” in a tinge of blue-green that — with the combination of the curvature of the monitor casing — evokes images of HR Geiger’s Alien. Netbook-compact at 264 x 188.9 x 25.8~27.5mm dimensions, it is a good size packed in my bag when I cycle to and from work — I don’t notice the 1.32kg weight.

The 10.1-inch LED-backlit WSVGA (1024 x 600) non-glare LED display could have been made larger, however — without growing the physical dimensions of the machine — by expanding the display further to the edges of the screen, as it is there is a border of a few inches around it.

Screen was gorgeous to use and there was no problem using in direct sunlight even with the screen at half-brightness.

The combination of the keyboard and the hardware as a unit feels feels quite trim and tidy when used on my lap. The keyboard was a pleasure to use (unlike some netbooks) and made great use of the space available. The keys are comfortably placed apart and I found them quite responsive and easy to type on.

The case on the N220 feels reinforced and the hinges are exposed to a minimum degree, which definitely adds to its overall sturdy feel.

One of the N220’s features that has the most potential is the instant start-up mode used by pressing F6 that allows the user to access web browsing and email while Windows boots up. However, the software used for this functionality — Hyperspace — was not installed on the N220 review model as supplied.

The N220 has an impressive 11.5 hour theoretical battery life. To test the machine’s battery in practice, I turned the power settings and screen brightness to full power and a DivX movie file was left to play via local area network (LAN). After 2 hours the battery had diminished by 40 percent, leaving the N220 with 3 hours and 18 minutes left of maximum operating power — an impressive.

The three USB 2.0 ports are more or less standard these days, but better than even some higher level machines such as Apple’s 13″ MacBook Pro — which only has two.

I couldn’t get the 3G connection working with the Optus SIM card as supplied, but I put my own 3 SIM card in to use the internal 3G modem with no problems. The modem picked the sim with impressive speed and web browsing was great, although video download was, to be expected, slower.

The N220 comes with Microsoft Windows 7 Starter Edition installed — an extremely limited version of Windows 7 which doesn’t even let you change your machine’s desktop wallpaper. Yuck.

Without using the instant-on feature I felt that boot-up time was a bit slow — an average startup took 53 seconds to to get to the desktop, but it took another minute and 20 seconds to get Google’s speedy Chrome web browser running.

The touch pad supports multi-touch in that it has gesture control — two fingers pushed up and down to scroll up and down, two fingers pinched in and out, vertically or horizontally, zooms out and in respectively. Holding a finger in and sweeping another finger in an arc rotates an image.

The gesturing is responsive but a shade or microsecond behind on the lapse time even when only using apps like Google Docs and Gmail. The usual single finger scroll bar on the side of the touch bad is slightly finicky although I think ease of use will get better over time spent with the machine.

I also installed the alpha release of of Jolicloud on the N220. Jolicloud is a Ubuntu Linux operating system designed for netbooks, which are infamous for low processing power and memory.

Using Jolicloud, boot-up of the N220 was — taken from an average of three boot-ups — much faster at 58 seconds to desktop and a further 14 seconds to a usable Chrome tab.

The multi-touch pad gestures went out of the window because they are Windows 7-driven, but the scroll bar was highly responsive as a contrast.

As a note, spell check on Gmail and Google docs was instantaneous, unlike using the service under Windows 7. Spell check under Windows 7 caused a slow response time in the best case scenario and browser freeze-ups on more than two occasions, in the worst case.

Under Jolicloud the battery indicated at 100 percent 5 hours of battery life at full power. Under the Jolicloud OS, the power settings and screen brightness were boosted to full power and a DivX movie was left to play via LAN. After 2 hours the battery had diminished by 44 percent, leaving the battery with 2 hours and 36 minutes left of maximum operating power.

Overall, we found the N220 to be a more than suitable netbook, especially with its in-built 3G mobile broadband and the option of monthly pricing plans from carriers like Optus. We especially liked the comfortable keyboard and the responsiveness of the trackpad, as well as the whole build quality.