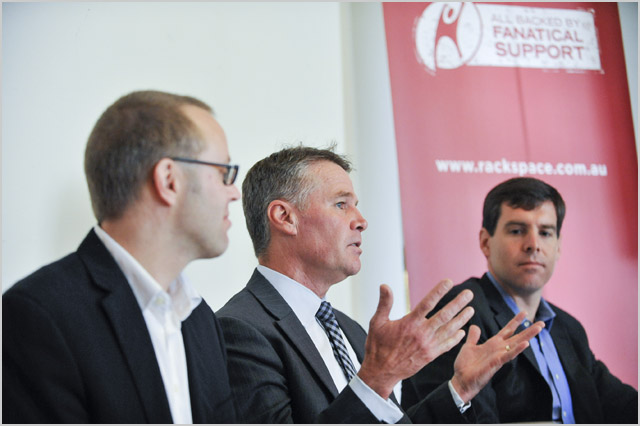 news US hosting giant Rackspace has confirmed plans to launch a large datacentre in Sydney later this year, to support growing local demand for its services after entering the Australian and Zealand markets in 2009 using its infrastructure located overseas.

In a statement this morning, Rackspace revealed the datacentre, based in the Sydney suburb of Erskine Park, is being built in partnership with datacentre specialist Digital Realty. “It’s currently in the late stages of construction and the first customers are expected to go live in late 2012,” said Rackspace’s statement. “To ensure it’s operated in the same manner as other Rackspace data centres, it includes security certifications upon launch for UTI Tier III Design and Construction, with certifications planned for SSAE16, ISO 27001, ISO 14001, PCI, and ASIO Intruder Resistant once fully operational.”

Rackspace is one of the largest global hosting companies, providing a range of services from eight existing datacentres located overseas. The company provides infrastructure services ranging from dedicated hosting to private and public cloud services, as well as application hosting — such as email systems.

The company said today that since formally entering the Australian and New Zealand markets in 2009, it had experienced “a significant increase in local customer numbers”. Prominent local customers include Rio Tinto, Telstra, Australia Post, Monash University, Tourism Queensland and more.

Mark Randall, country manager of Rackspace, Australia and New Zealand said: “Our local customers have learnt that Rackspace is synonymous with the latest in innovative cloud hosting solutions, but the key success driver that really sets us apart from the competition is our focus on service by providing customers with Fanatical Support. Australian customers love our support. It really has set us apart in an industry otherwise dominated by telcos, with support models that leave a lot to be desired.”

A launch event in Sydney this morning for the datacentre was attended by NSW Deputy Premier Andrew Stoner, who has emerged as a strong supporter of the state’s technology sector over the past several years. Stoner is pictured above (center) with Randall (left) and Rackspace Asia-Pacific managing director Jim Fagan (right).

“This is another Australian first for Sydney and New South Wales and fantastic news for our state’s reputation globally as the nation’s ICT and digital hub,” said Stoner in Rackspace’s media release. “Sydney and New South Wales are well-positioned for growth in the expanding global digital economy and Rackspace’s investment is another significant vote of confidence in our capacity for innovation and collaboration across the ICT sector.”

It appears from Rackspace’s statement that the company will be using technology from a range of global partners — “including Brocade, Cisco, Dell, EMC, Microsoft and Red Hat” in the fit out of the datacentre.

Critically for Australian customers, the company said it had recently begun offering customers agreements under New South Wales law, which meant they would be compliant with Australian national privacy standards. This arrangement will be extended to customers hosting at the new Sydney facility.

Alan Schoenbaum, General Counsel of Rackspace said: “Rackspace will not transfer customer owned data from our Australia data centre to a law enforcement agency of another country (including the United States) without a customer’s consent unless it is compelled to do so by Australian law. Data hosted in Australia by Rackspace is subject to the same laws as cloud services operated by wholly owned Australian companies.”

The news comes as a number of major companies have kicked off substantial datacentre investments in Australia.

In June, global cloud computing player and retailer Amazon confirmed that it had added an ‘edge’ location in Sydney to speed up the delivery of content to Australians, confirming a deployment model which was the subject of speculation some 12 months ago. In addition, other companies such as HP, NEXTDC and Metronode have recently launched major new datacentre facilities locally.

It is incredibly awesome to see major international hosting giant like Rackspace finally set up shop in Australia, and I can’t say how happy I am to see this happen. I had a conversation with Rackspace about two years ago over coffee where I emphasised that I wouldn’t take the company seriously until it had Australian infrastructure — a local sales team wasn’t enough. The company’s investment in this new datacentre infrastructure is a huge recognition of the value of the Australian market and the fast-growing nature of its digital economy. But more than that, it brings a top-grade commercial hosting player to Australia, which we desperately need more of.

One of the things which Rackspace does really well is automation and standardisation. Hosting in Australia is currently often a matter of either paying top dollar for hosting/cloud computing services which are managed primarily by humans (and often fallible and highly customised), or paying a lot less for a service which has more automation on the customer end but shitty customer service when it’s needed.

Rackspace gives you both, at a decent price. Because of their hugely scalable infrastructure and technical expertise with it, it’s my impression that you get automated tools which a lot of the existing hosting companies in Australia don’t give you. But you also get great customer service if you need it, which you occasionally will with any hosting system.

Along with Amazon, Rackspace is also one of the companies most commonly cited by web developers and IT startups as being the basic IT infrastructure platform on which they grow their company online. I anticipate the Australian IT startup ecosystem will quickly jump on board with the company. But it also does higher-end enterprise cloud computing and application hosting well; I’d anticipate that its name will be now added to the list of vendors consulted by CIOs for hosting and cloud computing needs — even CIOs in government now, due to the local datacentre. In general, I usually only hear good things about Rackspace from people who use them internationally, and it’s great to see a top-tier IT infrastructure company like this set up shop in Australia.

I can’t say congratulations enough to the Rackspace Australia team for making this one happen, and look forward to seeing what the guys can do with their brand-spanking new infrastructure. Nice one!!