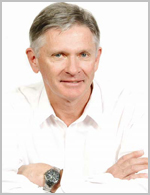 news Australian Internet news aggregator Wotnews has announced it will shut the site down to focus on its sister site WeAreHunted, potentially leaving site investor and Wotif.com multimillionaire Graeme Wood (pictured) out of pocket.

Originally named Plugger, Wotnews was set up by local web entrepreneur Stephen Phillips half a decade ago, with the aim of indexing Australian news articles in order to better deliver context and insight to Australian readers. Wood bought a 50 percent stake in the company in September 2008, as Australia’s web startup environment was beginning to pick up pace. At that stage, investment in local startups was a very rare event compared to today (with sizable investments currently taking place every month), and Wood’s investment in the company was seen as one sign that the local angel and seed investment market was beginning to take off again after the dot com crashes half a decade previously.

Subsequently, Plugger changed its name to Wotnews, after Wood’s Wotif.com. However, much of its core proposition remained unchanged over the years, and it does not appear to have been experiencing growth or pursuing a substantial commercial model for some time.

“Wotnews will be closing down soon,” the startup wrote on its site last week. “We would like to thank everyone for their support of the site over the years.” The company behind Wotnews has renamed itself Hunted Media after its more successful site, music discovery engine We Are Hunted, and will move to New York City to continue working on its other projects. “All member data will be deleted when the site is shut down,” it wrote with respect to Wotnews.

Wood’s investment in Wotnews hasn’t been the only time the entrepreneur has invested in an online media company over the past few years. Last year he invested a substantial amount in online journalism outfit the Global Mail as a philanthropic investment.

opinion/analysis
It’s not a huge deal that Wotnews has shut down; the site has been basically vacated for years, with its development team successfully pivoting to focus on other, more lucrative properties. There isn’t much evidence that Wotnews ever made Wood or the site’s other investors any real money; it was a Web 2.0 play that had some promise but never really seemed to coalesce into a real point.

However, I wanted to cover its demise for two reasons.

Firstly, I still use it. I use Wotnews to get alerts whenever companies listed on the Australian Stock Exchange publish new statements. I daily get a sledload of emails from Wotnews relating to announcements that companies like Telstra, iiNet, Optus, UXC, Oakton, SMS Management & Technology and so on have made. Now I need to find a new service which does the same thing; so I am a disgruntled user who is annoyed by Wotnews shutting down. In addition, this isn’t the first time this has happened to me. In January 2009, a very similar service I had been using called NewsAlerts.com.au shut down, as part of a mysterious deal with Wotnews. After that service shut down, I moved my ASX alerts needs to Wotnews as a replacement.

What I am saying here is that receiving email alerts on ASX notifications is a service which I continue to need and which I would personally pay a small fee each month for (say, $20). In my opinion, Wotnews could have commercialised this feature of its service alone on a subscription basis. I’m sure it has quite a large database of users using that service.

Secondly, I cover the demise of Wotnews to make the point that not all IT startups succeed. In fact, most of them fail, and it’s important to recognise that this is a legitimate part of the startup ecosystem. Wotnews should have probably been put to death a long time ago. It had some interesting ideas, but it didn’t work out, so it’s time for that team to move onto something else. It is just as important that IT media outlets such as Delimiter cover startup failure as it is that we cover startup success. Both are equal and necessary aspects of innovation in the technology sector.