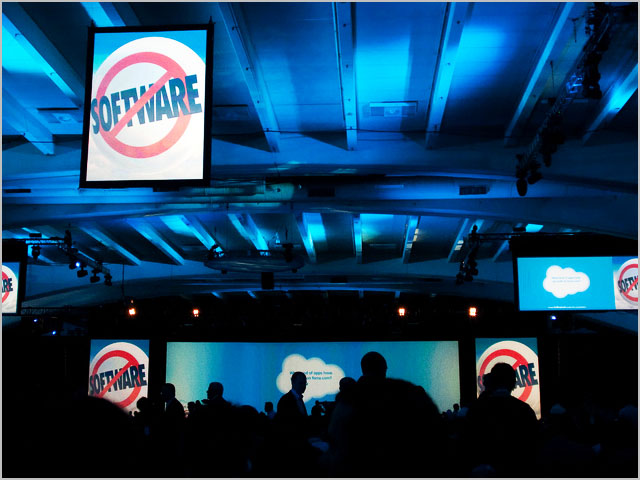 opinion/analysis As it continues its mega-push into what it has described as “social enterprise” technologies, Salesforce.com risks losing its focus on its core CRM products, particularly as its software as a service model has failed to prove itself in several key markets in Australia.

If you’ve been following Salesforce.com for a long time, as I have, you probably think of the US vendor as a fairly traditional enterprise IT software. Sure, the company has long differentiated itself through its focus on SaaS-delivered solutions, rather than the on-premise model preferred by most of its rivals, but at its core the company still largely makes money by selling software to large organisations through their CIOs and CFOs.

Then too, Salesforce.com has a strong history in enterprise IT. The company was founded in the mid-1990’s, after all, by former high-flying Oracle executive Marc Benioff, and still maintains links to Oracle, especially through the ongoing friendly rivalry between Benioff and his mentor, Oracle founder Larry Ellison.

However, if you examine Salesforce.com’s current positioning in the Australian market, you’ll likely find yourself questioning the characterisation of the company as an enterprise IT vendor. Right now, Salesforce.com is all about what it describes as the “social enterprise”. By this, it means the social networking software which it acquired with the March 2011 buyout of Radian6, and the Chatter feature which it has increasingly added to its existing customer relationship management suite — and elsewhere through its other products.

Between Chatter and Radian6, Salesforce now has probably the most complete package of corporate-grade social networking solutions in existence right now; and it’s pimping that technology for all it’s worth. At the company’s Cloudforce confab in Sydney last week, the “social enterprise” was front and centre. CommBank’s chief marketing officer Andy Lark was trotted out at the event’s keynote to discuss the bank’s use of Chatter and Radian6, and similar stories were heard from the likes of Vodafone, Spotify, and others.

Breakout sessions featured food giant Nestle and the marketing & public relations firm Ogilvy talking in detail about “social media listening and engagement” with Radian6, while CGU Insurance detailed its Chatter deployment. Later on, it was the turn of Rio Tinto, SAI Global and Lend Lease to talk about how they’d deployed the “social enterprise”, and Australian winery Yalumba discussed Salesforce’s Site.com platform, and how it allowed organisations to build “social websites”.

Unfortunately I wasn’t able to attend Cloudforce due to time constraints, but as I watched some of the videos from the event, quizzed Salesforce.com about the agenda and caught up with the coverage, I couldn’t help but feel as though some innocuous comments made in a post promoting a Cloudforce social media session on the company’s local blog last week were actually quite prescient. “Social social social. Everyone’s always on about social,” the blog post states. “What’s the big deal?”

Since when, I thought to myself, had Salesforce.com started targeting chief marketing officers with its products rather than chief information or financial officers? Since when had the company become focused on customer “buzz” and on monitoring “social media” rather than on deployments of its SaaS-based CRM software? Why, I wondered, was Cloudforce all about the “social enterprise” and not about the whole spectrum of Salesforce.com’s products — not only its CRM offering, but also its customer service offerings, its help desk software, its Force.com cloud computing platform, its Database.com cloud database software, its Heroku development platform?

To me, it feels like what Salesforce.com is doing right now is dumbing down its quite comprehensive enterprise IT software offerings into a rather limited message. The company’s Radian6 and Chatter product lines appear to be soaking up all of its corporate energy, and all of its marketing messages appear to be getting squeezed through this one tight aperture. This is quite a dangerous approach for the company.

Most commentators agree that Radian6’s technology is amongst the best available in the corporate social media monitoring space, giving marketers a good oversight of what their customers are talking about on social networking platforms such as Facebook and Twitter, for example.

However, if you look at the company’s financials, you wouldn’t be so enthusiastic about its prospects. When it acquired Radian6, Salesforce.com revealed that the buyout was expected to increase its revenues by only $45 million to $50 million in the financial year ending on 31 January 2012. This is a miniscule amount in the context of Salesforce.com’s overall revenues, which in 2012 were in the range of US$2.3 billion.

What this indicates is that while large organisations such as the Commonwealth Bank and Vodafone do consider this kind of “social enterprise” technology to be very important, that doesn’t mean they’ll spend a lot of money with Salesforce.com to get access to it. Unlike Salesforce.com’s core CRM solution, Radian6 isn’t the kind of tool which organisations pay hundreds of dollars per month per user to access.

In fact, Radian6’s absolute top package appears to cost just US$10,000 per month in total. In comparison, Salesforce.com’s most popular CRM package costs US$125 per user per month. When you consider that any major organisation to deploy Salesforce.com’s CRM package would likely be licensing several hundred seats at least per month, you start to see how the company’s CRM offering scales up into great global revenue; while more limited tools like Radian6 don’t.

You can see why Salesforce.com bought Radian6, and why it has developed Chatter. Both tools are great additions to the company’s core CRM offering, and Salesforce.com is on the right track with its belief that using these tools will give organisations additional insight into their customers and their own offerings.

But let’s not beat around the bush; both Radian6 and Chatter are not stand-alone products in their own right, but features. If Microsoft, Oracle or SAP had bought such tools, they would already be rapidly integrating them into their existing products rather than focusing their whole organisation around selling the new and shiny toys to customers. Chief marketing officers may be great case studies for Salesforce.com, but their budgets do not extend to enterprise IT software rollouts worth millions. They simply do not control that spending.

There is also the fact that at the same time as Salesforce.com is pushing “the social enterprise” so hard, customers appear to be going elsewhere.

The company’s continuing reluctance to establish an Australian datacentre (Asia-Pacific customers were recently migrated onto Japanese infrastructure) has effectively locked Salesforce.com out of Australia’s public sector, which represents much of the nation’s IT spend, and I suspect it’s a similar case with Australia’s financial services sector, although of course Salesforce.com does have some core clients in this area, as detailed above.

Ironically, a research study partially funded by Salesforce.com itself recently found that one of the major barriers stopping Australian organisations from migrating to cloud computing platforms is the lack of cloud infrastructure based in Australia.

Meanwhile, Oracle and Microsoft, both of which have on-shore options in Australia, are making hay while the CRM sun shines, both announcing a slew of major CRM wins locally over the past six months, including several where the prospective customer explicitly examined Salesforce.com’s offering but chose to go elsewhere. Many of these wins have been SaaS-style deployments; right in the core market which Salesforce.com helped create over the past decade, but is not capitalising strongly on right now in Australia.

Now, I should admit that in general I’m a big fan of Salesforce.com. I have a great deal of admiration for the way the company has shaken up the global enterprise software market with its software as a service offerings, and I love the continuing degree of innovation, fresh thinking and transparency we have seen from the company over the past fifteen years. I’m normally right on board with the Salesforce.com message and I love seeing Benioff stick it to the enterprise IT bigwigs — with a vengeance.

In markets dominated by powerful software giants such as Oracle, Microsoft and SAP, Salesforce.com often appears as a breath of fresh air.

But to my nose, just now that air is smelling a bit stale. Right now, Salesforce.com needs to get its head out of its “social enterprise” behind and start competing much more strongly in Australia in its core product areas. Innovation is great, but when a company named “Salesforce” starts to suffer execution problems in selling its products to the Australian market, you know something is wrong.