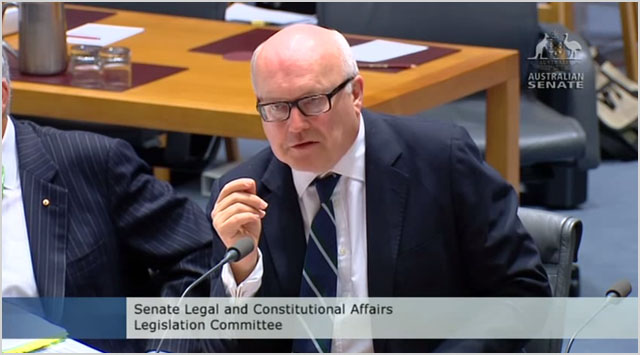 news Attorney-General George Brandis last week confirmed he could not remember having met with consumer organisations with respect to the development of the Government’s new Internet piracy policy, and appeared to state that he viewed the public interest in the matter primarily through the lens of the creative industry.

Before the election, Brandis refused to confirm whether the Coalition had a policy on online copyright infringement. However, in February this year, the new Attorney-General gave a major speech in which he re-opened the issue of Internet piracy. And in a subsequent interview, the Attorney-General subsequently upped the intensity of his discussion on the issue threatening to introduce legislation to deal with the issue of Internet piracy in Australia unless the ISP and content industries can agree on a voluntary industry code to deal with the issue.

Several weeks ago other elements of the content industry intensified its public pressure on the issue, telling media and marketing site Mumbrella that all options for dealing with Internet piracy were on the table, from court orders to target pirating users, to ‘three strikes’ mechanisms for cutting off the Internet access of alleged infringers and website blocks.

The renewed debate on the issue has come after previous talks on the issue held by the previous Labor Government and involving the ISP and content industries collapsed, with ISP iiNet stating that the content industry was unwilling to budge from its hard-line stance on the issue. Consumer groups were initially explicitly blocked from the talks but eventually allowed in.

Last week Brandis was questioned on the matter in a fraught session of Senate Estimates by Greens Senator and Communications spokesperson Scott Ludlam.

In the talks, Ludlam directly asked Brandis whether he had met with consumer groups such as CHOICE on the issue. Under the previous Labor Government, consumer groups were initially explicitly excluded from talks held by the Attorney-General’s Department between the ISP and content industries, although they were eventually allowed in after pressure from the media. The full video of the session is available online on YouTube.

Brandis said he could not tell Ludlam whether his office had met with CHOICE or another consumer group, the Australian Communications Consumer Action Network (ACCAN). “I cannot remember whether I have done,” the Attorney-General said.

The Liberal Senator merely noted that he and his office had met with many different stakeholders in the Internet piracy issue. “I have been involved in this debate for several years and over those several years I have met with numberless stakeholders from all points of view, so I imagine I have but it may have been a while ago,” he said.

However, Brandis was able to recall having met with other stakeholders in the process as recently as last week. This directly implies that the Attorney-General and his staff have not met with the consumer representatives at least in as regular a fashion as with industry representatives.

At one point, Ludlam referred to CHOICE and ACCAN as being representative of the “public interest”, rather than commercial interests as both the ISP and content industries represented.

However, Brandis appeared to object to that definition.

Brandis also revealed further details about how the issue is being tackled by the Attorney-General’s Department and what topics it is discussing.

The Attorney-General and the Secretary of his Department, Roger Wilkins, revealed that there was a team of four people working on the issue within the Attorney-General’s Department. The group did not have a name yet, but it is considering issues such as the graduated response scheme which is being used in some other countries internationally.

Wilkins revealed that the group had not formally rebooted the industry talks held by the previous Labor Government, with Brandis noting that some ISPs had proven reluctant to discuss the Internet piracy issue in the wake of iiNet’s successful High Court defence on the issue against the Australian Federation Against Copyright Theft (AFACT).

However, some ISPs have proven more willing to come to the table. “For example, only earlier in the month I had a very long conversation with Mr Thodey and Mr Shaw from Telstra and, if I may say so publicly, I think Telstra’s contribution to this issue and their willingness to work to find a solution to the piracy issue, which is really unaddressed in Australia, has been very commendable,” said Brandis.

It had been reported that Brandis had been ready to take proposals to Cabinet on the issue. However, Brandis denied this in Senate Estimates last week. “I have taken no submission to that effect,” he said.

Brandis also noted that he personally views the Internet piracy issue as one of high importance.

“As we said at the time of the election last year, as a matter of fact, the government is of the view that there does need to be reform to copyright,” Brandis said. “One of the issues— but it is not the only issue which has been exercising my mind—is piracy. Unlike the United Kingdom, New Zealand, Canada, the United States, France and many other comparable countries, Australia lacks effective protection against online piracy.

“Australia, I am sorry to say, is the worst offender of any country in the world when it comes to piracy, and I am very concerned that the legitimate rights and interests of rights holders and content creators are being compromised by that activity. You were not here for the Arts estimates, [Senator Ludlam], but I should tell you that of all the communities who were most concerned about this none is more concerned than arts practitioners—singers and film makers, people in those industries who see the fruit of their creative endeavours being stolen through piracy. So we want to do something about that.”

“The vague responses and misdirection by Senator Brandis confirm that the process of developing an anti-infringement strategy is being hidden from the Australian public, and further to that offer no confirmation as to whether there has even been any consultation with consumer groups,” said Simon Frew, President of Pirate Party Australia, in a statement published last week.

“Senator Brandis’ personal opinion regarding the matter is in line with those presented by the Australian Screen Association and other industry representatives. His attitude when answering questions during Senate Estimates suggests that he believes industry interests are the same as consumer and public interests, despite being unable to confirm or deny he had even spoken with consumer groups.”

“The influence of the copyright industry, in particular organisations such as the Australian Screen Association, over the direction of policy is concerning but unsurprising considering the amount of money and support flowing from members of this industry to the Liberal Party,” Frew continued. “Village Roadshow donated more than $300,000 to the Liberal Party in the previous financial year and the relentless campaigning for the Coalition from the Murdoch-owned press in the lead up to the election show that the Coalition is beholden to ‘old media’ companies such as Foxtel and major US movie studios.”

“The Attorney-General’s approach is yet another example of the Coalition being a government of luddites, protecting the industries of yesterday at the cost of innovation. A graduated response scheme will be ineffective, as will be censorship. Both regimes have been tried in multiple countries and have been demonstrated to fail. The proposals being put forward here are likewise doomed. If the industry wants to reduce piracy, they need to make content accessible, convenient and affordable in a timely fashion, not attacking users with backward and draconian laws,” Frew concluded.

opinion/analysis
Well, this is pretty much what we knew already. A shadowy group within the Attorney-General’s Department is actively consulting with the ISP and content industries about how to deal with the issue of Internet piracy. Consumer groups are being implicitly excluded, despite the fact that proposals are being considered which could see Australians actively cut off from their broadband access if a flimsy amount of evidence can be produced by the content industries to show that they have pirated content online one too many times.

And we have a conservative Attorney-General who — much like the previous Labor Attorneys-General — mainly views the issue through the lens of industry and doesn’t even seem to acknowledge that consumers, too, have rights and a legitimate interest in the issue. Meanwhile, Labor is avoiding the issue like it’s the plague and we only actually have the information we do through Senate Estimates because of the efforts of the Greens.