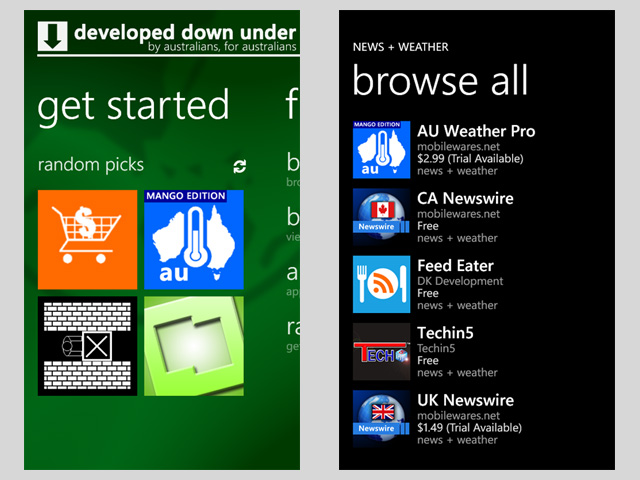 news Developed Down Under (DDU) is a new, free, Aussie-made mobile phone app for the Windows Phone 7 platform that officially went live about a week ago, with the aim of highlighting Australian-made Windows Phone 7 apps.

DDU is the brainchild of Scott Sheedy from local Windows Phone 7 enthusiast site Windows Phone Down Under and the project is an endeavour to bring as many Aussie apps under one banner as possible. Sheedy invited Aussie developers to nominate their own apps to be included in the live online catalogue.

The app is both a campaign and a Windows Phone 7 app for the entire Windows phone user community in Australia. It aims to showcase Aussie-made WP7 content for a local audience, encourage local developers, and overcome regional shortcomings in Microsoft’s Marketplace. DDU is a community driven initiative that serves up Windows phone apps from Australian developers who, have to opt in to be included. The Australian Windows phone developer community has been submitting their apps for inclusion over the last 10 days or so.

DDU aims to provide a platform for Aussie developers to showcase their apps for the Windows phone platform while being backed by free promotion and marketing of these apps among a local and international audience. It also aims to help Australia’s Windows Phone users to quickly find and locate apps relevant to their local market and provide an easier way of identifying these products when visiting blogs, news sites etc. An offshoot of the project will promote the best of local Aussie bloggers and a single news feed that covers Australia specific Windows phone news.

DDU, inspired by products such as wp7nl, appflow, and so on, allows users to view a catalogue of available Aussie developed apps, view app details, and if interested, click through directly to the relevant app’s page on the Windows Marketplace (where it can be downloaded/purchased/rated/etc). Other highlights include sections such as ‘Apps for Aussies’ which filters out a list of apps designed for localised Aussie content like news, weather, travel and more. There is also the randomly selected ‘quick picks’ from the catalogue, and the facility to browse by publisher, latest apps and genre.

The first week’s response to this Aussie-made Windows app has been positive with downloads and installation at locations all over the world.

With over 30 developers and more than 100 apps featured so far, the DDU App was scheduled to pass through certification over the Easter break. The initiative has been pitched as a resource to encourage and help struggling Australian developers and their app offerings with better visibility, positive feedback and reviews, effectively driving them to come up with more products.

Image credit: Windows Phone Down Under