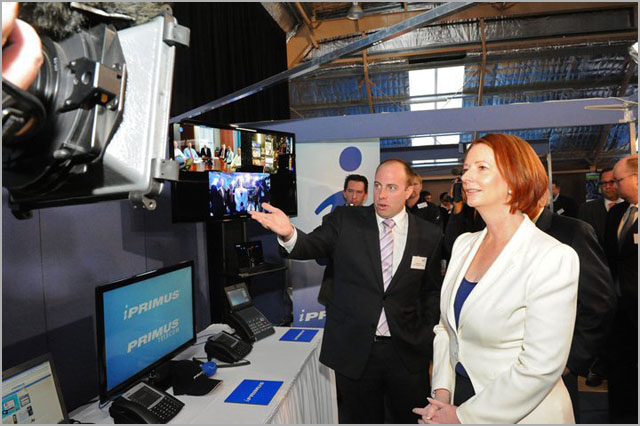 news Local telco umbrella group M2 this morning unexpectedly revealed it would buy the Australian operations of Primus Telecom, in a move that will further consolidate the Australian telecommunications landscape ahead of the rollout of the National Broadband Network.

Primus Australia is the local division of US-based Primus, and has remained one of the only significant second-tier players left in the consumer and small to medium business broadband market locally, after rival iiNet’s ongoing acquisition spree in Australia that has seen companies like Internode, TransACT, Westnet, Netspace, AAPT and OzeMail snapped up over the past half-decade.
However, the organisation has been struggling to achieve growth locally. The US company’s response to the issues came in August 2011, when it parachuted in US executive Tom Mazerski to fix the company’s problems.

“We are delighted to bring Primus into the M2 Group,” said M2 chief executive Geoff Horth in a statement. “The combined group will benefit from the strengths that each entity brings, reinforcing M2’s position as the leading challenger in the small to medium business market. The introduction of the Primus suite of next generation services along with the skilled and passionate team will ensure our sales teams are armed with the latest managed/hosted service offerings to meet the needs of current and prospective customers. On behalf of the company, I look forward to welcoming the Primus team and customers to the M2 Group.”

The acquisition will deliver M2 about 165,000 customer contracts, (comprising a mix of residential< SME, corporate and wholesale customers), power over the iPrimus and Primus brands in Australia, some 500 staff, and a significant amount of telecommunications infrastructure, including datacentres and metropolitan fibre network infrastructure. Primus also has about 286 DSLAMs deployed in telephone exchanges around Australia. Primus will also deliver significant revenues to M2, with the company making some $280.2 million in revenue and $39.9 million in earnings before interest, taxation, depreciation and amortisation in the 2011 calendar year. M2 expects synergy benefits from the buyout to be about $5 million per year. M2 will fund the buyout through an $83.1 million entitlement offer to raise funds from shareholders (with every shareholder being able to buy one new share for every four shares held), as well as $139.6 million of "senior" bank debt. It will, in future, consider using surplus cash generated to accelerate repaying the debt. Goldman Sachs, Lander & Rogers and Gilbert & Tobin are the various corporate advisory and law firms advising M2 on the buyout. opinion/analysis
Wow. Another major buyout in Australia’s telecommunications sector. It’s hard to know what to make of all the acquisitions over the past year. TransACT, Internode, and now Primus. One has to wonder how many telcos will be left standing to buy services from the National Broadband Network Company, should the NBN every be completed.

The first thing I think about this buyout is that Primus’ US parent of the same name must have given the company’s new local chief executive Tom Mazerski a mandate to discuss these kind of buyouts when he was shipped in to Australia nine months ago. The executive must have discussed the long-term future of the Australian subsidiary with Primus US and the discussions must have canvassed the possibility that Primus Australia could be sold off.

It’s not clear whether this was the main strategy which Mazerski was sent to Australia to execute, but given that this transaction has taken place just nine months after he arrived … one has to suspect that the executive was indeed sent Down Under to flog Primus off. It would have taken Mazerski (pictured, right) most of his time in Australia over that period to conduct serious discussions with the major potential acquirers (which would have included Optus, Vodafone and iiNet, at least). One also wonders whether Mazerski will now head back to the US (less than a year after he arrived) with a golden bonus in his pocket for offloading the local operation.

Primus’ move to sell its Australian operations is quite consistent with the fact that globally, major telcos have struggled to compete outside their home countries, where they typically have not rolled out much of their own network infrastructure and have consequently always made smaller margins than better resourced local players.

In terms of the impact on Australia’s competitive environment, I would say there is a positive impact. For some years, Primus Australia has been going nowhere; grinding its wheels and failing to create an impact on the local market. It maintains a decent number of SME and consumer customers, but hasn’t been innovating at all.

M2’s buyout should change all of this. M2 is a strong, innovative and growing multi-faceted telco which has found its way into several niches in Australian telecommunications; wholesale, SME, business, mobile and so on. With the acquisition of Primus, the company also gains a substantial footprint, and becomes perhaps the fifth most important player in Australian fixed line telecommunications. And the buyout doesn’t really remove a competitive player from the market, given that M2 hasn’t previously had a strong consumer presence in broadband. This truly looks like a complementary buyout.

The acquisition should help M2 solidify its offerings and ability to gain scale under the future National Broadband Network scenario. I’m looking forward to seeing whether the company can challenge some of the larger and lazier targets upstream (hello Telstra and Optus) as iiNet and TPG continue to do.

Perhaps more than this, it’s great to see the local resources of a US telco giant like Primus making their way into the hands of a strong and growing Australian player like M2. This reverses the ongoing trend of great Australian companies being sold off-shore and having their value depreciated. Now let’s see what M2 can do with its added scale.