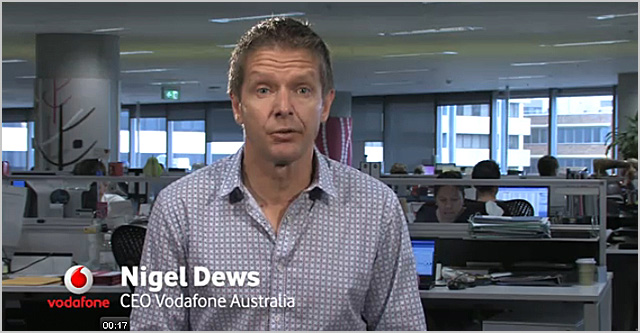 Vodafone Hutchison Australia (VHA) is a joint venture between the Vodafone Group and Hutchison Whampoa, providing mobile services to over 7.0 million customers in Australia. Dews has been the CEO of VHA for three years since the merger in 2009, after leading Vodafone’s stand-alone business in Australia before it merged with Hutchison. His tenure witnessed large scale customer exits last year due to intermittent network issues and outages, forcing the telco to embark on an extensive network upgrade and a customer ‘guarantee’ program.

These measures may bring a turnaround this year to the embattled mobile company, but it is unclear yet as to what impact they are having. In fact, the changes in top management at VHA come at a time when reports even suggested that the global Vodafone group was considering offloading the Australian company.

Morrow, the new CEO designate, is a veteran in the global telecommunications industry. He was the Chief Executive of Clearwire and prior to that, was Chief Executive of the Pacific Gas and Electric Company. Morrow had a stint earlier with the Vodafone Group as Europe Chief Executive, overseeing the Group’s businesses in Japan and the UK.

On his new appointment, Morrow said: “Vodafone Hutchison Australia is a business with a great future. I am excited by the prospect of joining a strong team. I’m also committed to meeting, and listening to our customers to understand their needs, now and over the years ahead.” Dews said that he was privileged to lead Vodafone Hutchison Australia. He felt it was time for a change after nine years in the telecom business, five of them as Chief Executive of Vodafone in Austraila. He was confident that as he took on his new role, he had left behind an excellent team that would flourish under Morrow’s leadership.

The media release issued by the telco reiterated Vodafone Group and Hutchison Whampoa’s long-term commitment to VHA as the business sees positive developments in the light of increased investment in network improvement and new customer service initiatives.

Commenting on the changes in top leadership, Vodafone Group Chief Executive for Africa, Middle East and Asia Pacific, Nick Read, said: “We are strongly committed to Australia. We’ll continue to back our business here as it makes the significant investments needed to build the network of the future. Bill is an outstanding industry leader and is well-placed to drive growth.” Read also thanked Dews for his energy and commitment in leading the complex task of executing the merger of businesses under the Vodafone brand and wished him well for the future. The media release also announced that Fok is tipped to take over as VHA Chairman on a rotational basis.

opinion/analysis
Firstly, it should be clear to observers that although Vodafone has carefully worded it’s media release on Dews’ exit, the executive has not stepped down simply to spend more time with his family or seek a lifestyle or career change. The executive’s departure comes at a strategic time, and no doubt it has been carefully negotiated with Vodafone Australia’s various stakeholders — including the Hutchison Whampoa group and the global Vodafone group.

Dews presided over one of the biggest disasters in the history of Australia’s mobile sector — a disaster which continues to plague Vodafone Australia, and one which may yet see the future of the company uncertain, if it does not pull out of its current slump somehow. It would have been a bad move for Dews to have been replaced before this point, as Vodafone needed both a steady pair of hands to guide it forward through its network and brand rebuild, as well as a ‘fall guy’ to take responsibility for the issues. Dews has aptly served both these purposes as caretaker for Vodafone Australia over the past year or so.

However, now that much of its network rebuild is complete and Vodafone is attempting to woo customers back onto its network and turn its troubles around, the company clearly needs a new pair of hands to take it forward. This will serve the purpose of distancing the company from its previous issues and giving the impression that it’s back on the path forward. Morrow is that man. I don’t know a great deal about the executive, so it will be interesting to see how he positions himself in Australia over the next few months. Will he be a rambunctious foreigner like Sol Trujillo, or display more quietly spoken strength like Paul O’Sullivan or David Thodey? It remains to be seen, although at the moment I would probably lean towards the former.

As for Dews, I don’t think we should damn the executive too highly for the issues which have plagued Vodafone over the past while. The executive has clearly done as much as he could — and most of the right things — to steer the company through its crisis and put it back on the right path. Of course, as he led Hutchison Australia even before the merger, many of those problems can be laid at Dews’ feet to start with. But of course, some responsibility must also rest with his superiors — no doubt there was a reticence to invest in the business at that point.