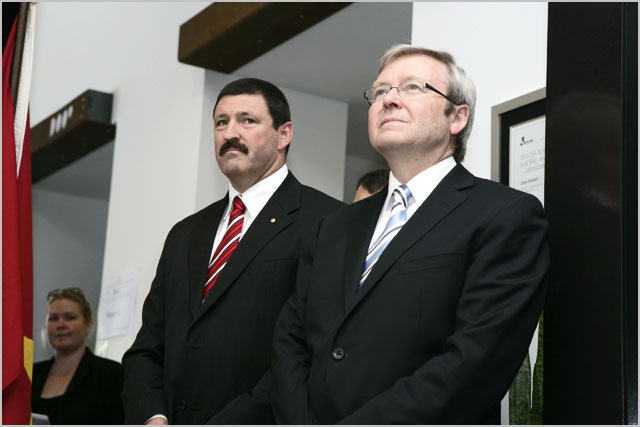 opinion The fate of the National Broadband Network now rests squarely in the hands of Kevin Rudd. If the former Prime Minister wins power back from Julia Gillard, Labor has a chance of retaining power at the next election and continuing the NBN rollout. If he fails to do so, most commentators agree, Gillard will be annihilated and Abbott will scrap the project wholesale.

The past 24 hours have been somewhat bittersweet for those who support the NBN project.

On the one hand, it has been somewhat nostalgic to contemplate a possible return of Rudd to the Prime Ministership. Despite Gillard’s ongoing association with the NBN and her regular appearance at launches associated with the project — culminating in the Prime Minister’s spurious attempt to take credit for the separation of Telstra at her press conference in Adelaide this morning — it has always been Rudd that onlookers have most strongly associated with the NBN policy.

It’s impossible, after all, to erase from the nation’s collective memories the sight of Rudd on a chilly April morning in 2009, brusquely proclaiming on the steps of Parliament House in Canberra that the Federal Government would roll out ubiquitous fibre to the home around Australia, solving the nation’s bandwidth troubles once and for all, in a grand nation-building sweep.

Since her ascension to the Prime Ministership, Gillard has been a strong supporter of the NBN. But she has never appeared to quite understand the project, regularly deferring to Communications Minister Stephen Conroy when it came to deeper questions about it and erroneously claiming on a number of occasions that a Coalition Government under Tony Abbott would literally rip the NBN’s fibre out of the ground.

However, as everyone is well aware, Rudd’s dramatic resignation from the Gillard Cabinet, and, most assume, his eventual challenge for the Labor leadership draws the entire NBN project into highly risky territory. The 7:30 Report’s chief political reporter Heather Ewart had this to say last night about the chance of a Gillard Government winning the next Federal Election:

“Whatever does happen, the party has been enormously damaged by this. The public doesn’t like it, and really you would think it’s very difficult, well-nigh impossible for the party to recover from such ongoing destabilisation and division, almost impossible to win the next election. I think the only issue now is how to avoid some sort of wipe-out.”

“… the essential truth is that Rudd is not the Gillard government’s problem. Its problem is that, for a year now, the opinion polls have been steadily conveying a simple and unmistakeable message – that the Australian people do not approve of Julia Gillard and will not elect her.”

In short, unless the Gillard Labor Government undergoes a dramatic change in fortunes over the next year, there will be a change of Government. And with that change, as matters currently stand, will come the realisation of Tony Abbott’s pledge to cut the project which he and so many other members of the Coalition have unfailingly described as “the white elephant” for the past several years.

If Malcolm Turnbull is appointed Shadow Communications Minister under an Abbott Prime Ministership — itself a very unclear prospect — then the NBN can expect that Turnbull’s greater technical understanding of the dynamics of the telecommunications industry will buy the NBN some reprieve, while the Productivity Commission is ordered to carry out a cost/benefit analysis into its operations.

Following such an analysis, there is little doubt that the project will go ahead in some form; the debate over whether Australia needs high-speed broadband is clearly over now, with the various sides of politics only disagreeing about the form which Government investment in the area should take. However, there is also no doubt that it will be drastically modified to more precisely fit the Liberal mandate of small government and letting the market solve most of its own problems.

This approach will please Telstra, which will be able to continue dominating Australia’s telecommunications sector; but it will spell an end to a well-managed and nationally standardised NBN project under the care of the experienced cadre of engineers currently at NBN Co. Many of those in the upper echelons of the project, including CEO Mike Quigley, will doubtless resign, and as a whole the project will be further politicised and cast into chaos for several years.

The only man standing between the NBN policy and this unsavoury future is Kevin Rudd. Should Rudd succeed in his eventual challenge for the ALP leadership, Labor would then stand a chance of prevailing in the next election against Tony Abbott, who much of the nation sees as fairly responsible, but personally unsavoury.

This would especially be the case if Rudd can enjoy at least a year’s grace before the next election is called. A popular politician like Rudd could do a lot with enduringly popular policies such as the NBN in that time. Right from the start, Rudd has been able to sell the NBN to the technology-illiterate portions of Australia’s population in a way Gillard has always failed to do. The NBN was Rudd (and Conroy’s) torch from the beginning. It will be marvellous to see him pick it up again, now that the policy has come this far.

The irony of the situation is that a resurgent and popular Rudd may eventually stimulate the Coalition to itself return its own highly popular leader to power, in the figure of Malcolm Turnbull.
Conroy, a key Gillard supporter, was asked this morning on ABC Radio what he would say to the public and Labor MPs who have been told that Rudd could best Tony Abbott at the next election.

“Well all the polling also shows that Malcolm Turnbull would beat Tony Abbott in any ballot,” our Communications Minister blithely replied. Prophetic words indeed. For the NBN policy to have a chance at surviving the next several years, Rudd may need to beat not only Gillard and Abbott before the next election, but also Turnbull during it.

Given the travails that the NBN went through during the 2010 election, if the policy survives in its current form past 2013, some of its supporters may just start to believe in divine intervention. Because from my perspective, right now, a political miracle is just what the NBN needs.