fake news The Federal Opposition today released a comprehensive new broadband policy to rival Labor’s big-spending National Broadband Network project, describing its own initiative as a landmark ‘Fibre to the Nothing’ (FTTN) proposal.

Speaking at the National Press Club in Canberra today flanked by Opposition Leader Tony Abbott, Shadow Communications Minister Malcolm Turnbull told an audience of senior political figures and high-ranking executives from the telecommunications and technology industries that the new policy would be based on three key planks.

Firstly, he said, if it won government in the upcoming 2013 Federal Election, the Coalition would roll out fibre broadband infrastructure “nowhere”. “Nobody” in Australia would be provided with next-generation fibre broadband, Turnbull said, because there was “no demand” for the significantly faster speeds which it would provide compared with those available on the existing copper network, and “no-one” wanted to pay higher prices for faster broadband that would “not be used”.

Secondly, Turnbull said a Coalition Government would “never” deal with the issue of Telstra’s vertically integrated operations, which bitter rivals such as Optus, iiNet and Internode have long claimed prevented them from fairly competing in the broadband market, with Telstra being accused of playing favourites with its own retail division. There was “no need” to separate Telstra, according to the Member for Wentworth, as the telecommunications sector had “no shortage” of existing competition.

Lastly, Turnbull added that rural and regional areas around the country would receive “nil” in terms of total subsidies to allow them to purchase broadband services at comparable prices to metropolitan areas in Australia’s major cities. Citing expert commentary from leading economists, Turnbull said investing in this area would unnecessarily lead to “negative” outcomes for competition, distorting the industry in directions that would not serve consumer outcomes, he said.

“Nowhere, never, nil,” Turnbull told the audience emphatically at the conclusion of the speech. “It’s a comprehensive package — we’ve left nothing out.”

Speaking after Turnbull, Opposition Leader Tony Abbott praised the new ‘FTTN’ policy, saying the Coalition’s approach was sharply differentiated from the NBN strategy of the current Labor Federal Government, which he described as a “white elephant”. “The beauty of our policy,” he said, “is the amount of public money that we’ll be allocating to it: Nothing.” 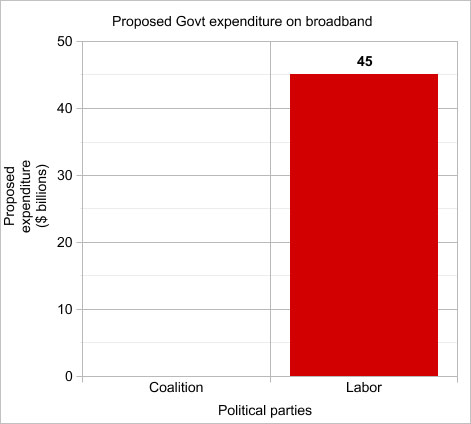 The policy was immediately praised by the Economist Intelligence Unit, which had issued a report in October describing Labor’s NBN policy as the “most extreme” example of government intervention in high-speed broadband planning globally. At the time, Turnbull had used the Economist’s statement to brand the NBN policy as “the telecommunications version of Cuba”.

In a new statement this week, the EIU stated that the Coalition’s plan was the “most conservative” example of government intervention in a telco sector globally. “At the far end of this range of intervention — even further than Antarctica — is the Australian Coalition, which has pledged the lowest level of total public funds pledged, due to its plan to create, own and operate an ultra-fast fibre network in virtually no parts of the country,” the EIU said.

However, not everyone was enthusiastic about the Coalition’s new policy.

Optus chief executive Paul O’Sullivan said it wasn’t appropriate for the Government to do “nothing” about the dominance of Telstra over the telecommunications industry. “From its humble beginnings in 1992, Optus has grown to become a company which today supports more than nine million mobile services and one million fixed and broadband customers,” O’Sullivan said. “We’ve achieved all that through doing almost nothing.”

“But we could never have achieved that if the Federal Government had also done nothing,” the Optus chief added. “It’s important that the Government does something, or else the entire telecommunications industry won’t be able to do anything, and it should be obvious by now that nothing will come of that. For heaven’s sakes, the industry can’t just be left alone to do everything!”

However, in a separate interview following his speech, Turnbull rejected O’Sullivan’s comments. “[Communications Minister] Stephen Conroy gave the industry everything,” he said. “And look where it got him: Nowhere. Now we’re proposing something so simple that it can’t help but work: Nothing. Under our policy, we’ll nip this National Broadband Network policy in the bud, so that it never gets off the ground. The industry will have no place left to run to and no-one to bail it out.”

One final brief comment on the matter came from the maverick chief executive of Internet service provider Exetel, who has been consistently outspoken in his criticism of the NBN policy. Linton posted a brief blog post discussing the National Broadband Network policy this afternoon. “I always knew it would come to nought,” he said.