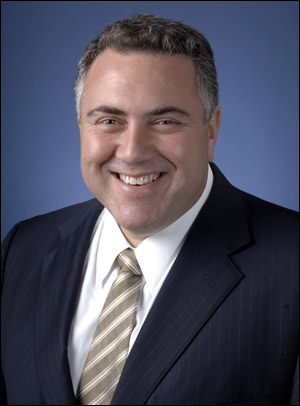 blog In an interview with the Sydney Morning Herald (click here for the full story), Shadow Treasurer Joe Hockey has made some … interesting claims about Labor’s flagship National Broadband Network project. The newspaper writes:

The broadband network was by far the biggest off-budget initiative ever seen in Australian government, Mr Hockey said … “I mean, it’s multiples of anything that’s ever been off-budget … it detracts from productivity,” he said.

Readers are advised to treat Hockey’s claims with a grain of salt — in a similar vein to Opposition Leader Tony Abbott’s comments on the NBN earlier this week. Hockey is correct when he says the NBN is largely off-budget. However, if the project goes according to plan and at least breaks even for the Government’s investment, which many believe it is likely to do (given the fact that Telstra and Optus will be migrating their customers wholesale onto the NBN’s fibre infrastructure), this won’t matter.

Projects are put in the Federal Budget because they cost money; while the NBN is a capital investment expected to make money. Hockey’s criticism will become valid when it can be proven that NBN Co is not meeting the objectives laid out in its corporate plan — and I wouldn’t expect that to be possible, even if it happens, for at least another five years.

As far as Hockey’s claim about productivity goes … this is simply factually incorrect. About a billion studies have shown that next-generation broadband infrastructure helps drastically improve productivity through the rapid uptake of new technology in the workplace. It appears that Treasurer Wayne Swan understands this. “If it was up to Joe Hockey, we’d still be talking to each other using two cans and a piece of string,” his office reportedly told AAP — ZDNet.com.au story here. A bit of an exaggeration, but apt ;)