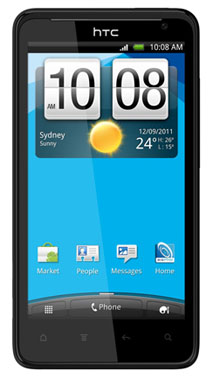 news The nation’s biggest telco Telstra has turned up the heat on anticipation for its first 4G handset launch, confirming this week that it will be soon releasing the first phone capable of fully utilising the speeds of its 4G network. This phone will be an HTC product.

“We’ll release the first 4G handset soon,” wrote Gerd Schenkel, executive director, Telstra Digital, in a post on the company’s support forums yesterday. “It’ll be a HTC product.” Schenkel invited Telstra customers to visit a registration page for the product to receive further information when a date is set.

On 27 September, 2011, Telstra had revealed the official switching on of its fourth generation (4G) Long Term Evolution (LTE) mobile network across the nation, providing 4G coverage across the capital city central business districts (CBD) of Melbourne, Sydney, Perth, Adelaide, Hobart, Darwin and Canberra, and over 30 other centres in Victoria, New South Wales, Queensland and South Australia. The telco had also planned to launch the 4G network in more than 50 additional locations by the end of 2011. Capital CBD implies 5km from the GPO in the capital cities and 3km from the town centre in regional locations.

Telstra chief executive David Thodey had stated, “We know there is a huge appetite for 4G-powered smartphones and tablets and Telstra is working with some of the world’s leading manufacturers to bring some of these devices to customers in the first half of 2012.”

At the time, Telstra had flagged the HTC Holiday as their first 4G smartphone, ‘Holiday’ being a codename for the Raider 4G selling in South Korea. A similar option is reportedly to be called the HTC Holiday and will be available for the AT&T LTE network that runs on the 700MHz spectrum in the US.

The device’s final name has not been settled by Telstra and HTC, but it will be the first LTE-capable smartphone to sell in Australia. The phone’s features are similar to those of the HTC Sensation including, a 1.2GHz Dual-Core CPU, a 4.5 inch qHD (960×540) LCD display, Android 2.3.4 w/Sense 3.0, 8MP rear-facing camera (that shoots 1080p) and a 1.3Mp front-facing camera, a 1GB RAM and 16GB of internal memory. With a new ‘Ice Cream Sandwich’ (4.0) version of Android having launched, the Raider 4G is expected to feature this version of the Android platform.

A key difference in Telstra’s Next G network is that it runs on the 1800MHz spectrum band, while the 3G aspect uses the 850MHz spectrum band. Next G coverage depends on customer location, the device and the presence of an external antenna. Customers connecting to Next G will be automatically switched between the two networks which will run side by side. Customers outside the 4G areas will have their BigPond USB 4G device make an automatic switchover to Telstra’s 3G network. The 4G network will enable faster uplink and downlink speeds and faster mobile Internet speeds, reducing the strain on Telstra’s Next G network.

The changeover to 4G will double the speeds available to Telstra customers. The current 3G network that is based on the HSPA+ standard has download speeds varying between 1.1Mbps and 20Mbps, whereas the 4G band will enable speeds between 2Mbps and 40 Mbps. Upload speeds that are currently between 500kbps to 3Mbps will expand to between 1Mbps and 10Mbps.

The Telstra 4G enables a more responsive internet connection, with network latency expected to be cut in half. Real-time applications such as internet gaming, video conferencing and cloud-hosted streaming services are promised to be smoother with less buffering and fewer interruptions. Optus and Vodafone are also planning similar 4G rollouts.