Correction: This article originally stated that Telstra was continuing to work with the Federal Government on implementing its controversial mandatory Internet filtering policy. However, it is believed that the ‘blacklist’ of sites Telstra referred to in its letter actually refers not to the mandatory filter blacklist, but to the more limited voluntary child abuse blacklist the Australian Communications and Media Authority is developing. The same or a similar distribution process could apply to both lists.

news Telstra is continuing to work with the Federal Government to filter a blacklist of child abuse sites developed by the Australian Communications and Media Authority, despite the fact that the telco and rival Optus have already implemented a similar scheme with the cooperation of the Australian Federal Police and international policing agency Interpol.

Facing strong opposition from the Coalition, the Greens and the general public, Conroy last year postponed legislation associated with Labor’s wider mandatory filtering project while a review of the Refused Classification category of content (which the filter is intended to block) was carried out by the Minister for Home Affairs for the consideration of federal and state Attorneys-General.

At the time, Conroy announced that a number of ISPs would voluntarily block a more limited set of content (child pornography sites). Conroy’s much more comprehensive filter plans to block the entire category of banned content in Australia — for example, terrorist materials, detailed instruction in crime and so on. The Australian Communications and Media Authority was to develop a list of sites to be blocked. However, this year Telstra and Optus have implemented their own separate scheme, blocking a ‘worst of the worst’ list developed by Interpol. The Australian Federal Police has worked with the two telcos on the matter.

In documents released by Conroy’s office under Freedom of Information laws this week, it was revealed that Telstra continued to work with the Government on the ACMA’s list, despite already having implemented the Interpol list. In the letter (click here to read it yourself), Thodey indicated that he had asked Telstra’s director of government, strategy and corporate services James Shaw to speak with government officials regarding a deed of confidentiality to be signed between Telstra and the Australian Communications and Media Authority. 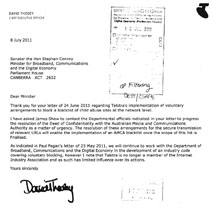 The document, which was to be resolved “as a matter of urgency” would facilitate the secure transmission of what is believed to be the ACMA sub-blacklist. The “implementation” of the ACMA blacklist would be enabled once the scope of the list was finalised, Thodey wrote. It is possible, however, that this same document and process could govern the transmission of a wider ACMA blacklist, should the Government’s more comprehensive mandatory Internet filtering scheme be realised.

In a similar letter from Optus to Conroy on 15 July, the telco’s chief executive Paul O’Sullivan noted it was working on the limited Interpol/AFP scheme while the Government matured its mandatory filtering policy through the refused content Classification Review, and pending State and Federal Government decisions required to implement any recommendations stemming from the review. “We acknowledge your stated position that this may include legislation, and we are prepared to engage with you in this process,” wrote O’Sullivan.

In July, the ACMA had revealed that it had quietly started evaluating new URLs which it believes may contain child abuse material, to be added to its sub-blacklist. “The Minister’s announcement regarding voluntary ISP blocking on 9 July 2010 foreshadows a role for the ACMA in terms of distribution of a list of child abuse material and transparency and accountability measures,” the ACMA said at the time.

The ACMA added that it had not “as yet” distributed any list of child abuse material to ISPs for blocking, and it noted that the regulator played no role in the voluntary filtering scheme involving the Interpol list that Telstra and Optus have implemented.