news The nation’s number two telco Optus has released its first National Broadband Network pricing plans, with the company offering a range of plans from $39.99 up to $129 and with included data quotas ranging up to a terabyte.

The company is the fifth major Australian broadband provider to release NBN pricing plans, after Internode, iiNet, Exetel and Primus have done so over the past few months. Telstra and TPG remain the only major fixed-line broadband players not to have released any commercial NBN pricing as yet, although Telstra is expected to do so over the next few months, following the launch of commercial services on the NBN in October.

Optus’ plans basically fit into two broad categories — plans with a home telephone line bundled in, and plans without a telephone line (labelled as ‘Naked’). The company’s naked plans range from $39.99 for a plan with 40GB of data quota included, to the top naked plan, which comes with 500GB of data included. If you bundle a home telephone line with your NBN broadband connection, you’ll pay substantially more — $64.94 for a 120GB quota, $109 for 500GB and $129 for a terabyte. These tranche of plans are known as Optus’ ‘Fusion’ plans.

Unlike other broadband providers, Optus has chosen not to explicitly split its NBN plans up into speed tiers. Instead, it appears to have set a basic speed of 25Mbps for all of the plans apart from the minimum $39.99 plan (which will have a speed of 12Mbps), with customers to pay $10 per month extra to upgrade to 50Mbps speeds and $20 per month to upgrade to 100Mbps speeds.

In addition, Optus will only allow customers to sign up for its lowest tier $39.99 plan if they also have a monthly mobile plan with the company worth $19 or more, while customers can save $10 per month off any of the other ‘Naked’ plans if they also have a mobile plan. The $109 and $129 ‘Fusion’ plans come with “unlimited standard calls” to fixed lines and mobiles within Australia (with the exception of calls to Pivotel lines), while the $64.94 plan comes with up to $30 worth of call value.

In addition, it should be noted that Optus has retained the on-peak/off-peak quota system which many ISPs currently use in their broadband plans. For example, the company’s Naked plans have all had their quota split mostly down the middle, with half of the quota being usable during peak periods, and half during off-peak periods. When a customer’s quota has been exhausted, Optus will shape customers’ speeds down to 256kbp.

All of Optus’ plans come with a router which the company has badged its ‘Residential Wi-Fi Gateway’.

In a statement released this morning, Optus director of its Consumer Fixed division, Anthony Shiner, said the telco had been a champion for competition for nearly 20 years, and the NBN would open up the opportunity for Australians to finally receive real choice for their fixed services.

“Our focus has always been on putting the customer first and delivering great value, so we’ve decided to offer NBN plans on a monthly basis so consumer and ‘home office’ customers can start benefiting from true competition right away, with a much richer online experience,” he added. “This includes the new $39.99 broadband plan which is available to current Optus postpaid mobile customers on contract.”

“As the NBN roll-out progresses, we’ll release a greater range of plans as well as more exciting broadband bundles that combine the latest Optus digital products such as Optus MeTV to help customers stay better connected and entertained.”

Optus also this morning announced that it had started offering NBN aggregation services on an initial trial basis, with the first retail telco to sign up for the service to be iseek Communications. Optus Wholesale’s NBN aggregation service allows a service provider to reduce the number of points of interconnect (POI) to the NBN. This improves the economics of connecting users to the NBN and enables partners using the service to stay competitive with larger service providers.

Vicki Brady, managing director, Optus Wholesale and Satellite said: “As a proud wholesaler of telecommunications services and one of Australia’s leading wholesale providers, we’re looking forward to enabling more choice and competition in the fixed broadband market via our NBN aggregation services. Optus Wholesale will also be offering customers a range of value-add services in addition to NBN aggregation as part of a bundled offering starting early next year.” 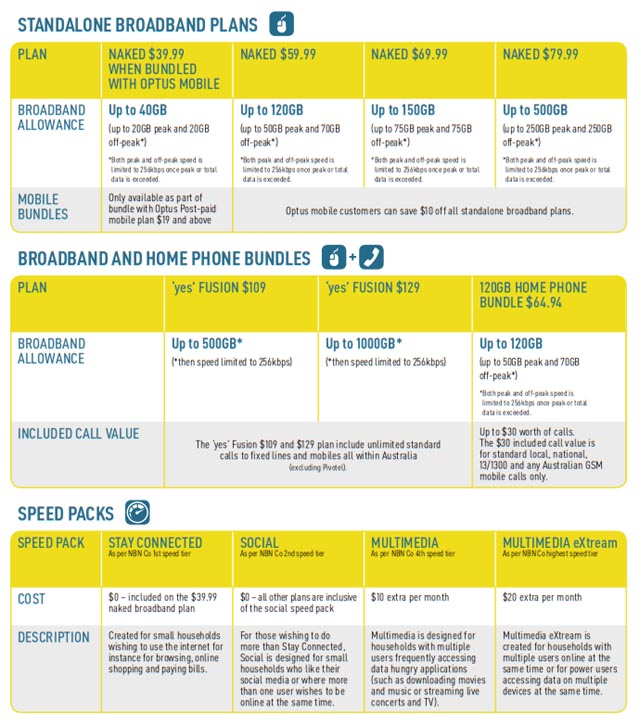 Opinion and analysis to follow in a separate article.