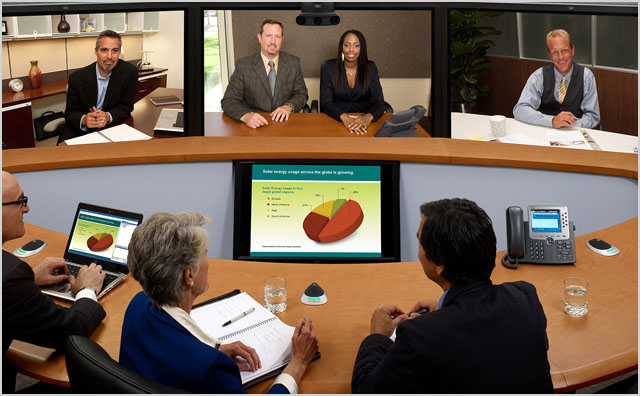 news The Federal Government has saved an impressive $12 million in travel expenses by setting up Cisco’s TelePresence solution, according to a statement jointly issued by the networking vendor and its partner Telstra in Canberra this week, with just one TelePresence meeting involving 12 separate locations, for example, delivering a $100,600 saving in travel costs.

The TelePresence service has also realised sustainability, productivity and cost benefits while hosting over 1031 official meetings adding up to 1660 hours. The deployment has considerably decreased carbon emissions, with staff staying in their offices instead of commuting to Canberra.

In February 2009, the Government had announced the joint initiative with Cisco and Telstra for the deployment of the Cisco TelePresence system. The service, one of the largest TelePresence networks in Australia, has been operational for the last 18 months and integrates 36 TelePresence sites. These connect a single, highly secure, high definition video conferencing facility to Prime Ministerial and Cabinet offices, Parliament House, seven Commonwealth Government offices and the offices of Premiers and Chief Minister agencies in every Australian state and territory.

The announcement this week by the Government heralded a coming of age for video conferencing, according to Philip Jones, Executive Director, Data and IP, Network Applications & Services at Telstra. “A modern meeting today is one that uses technology such as high definition TelePresence to bring people from across the country together for a meeting without the need for travel,” Jones said.

“Telstra managed the planning, designing and deploying of the NTS in Government offices all across the country. Our combined network and project management skills means we have now delivered a proven solution to a national Government audience that is capable of supporting the Government as it strives to deliver ICT deployments that deliver genuine productivity, sustainability and cost savings.”

Ken Boal, Director of Public Sector, Cisco Australia, described the National TelePresence System as a pioneer in its utilisation and deployment. “The Australian Government is at the global forefront by using immersive video technology to bring key decision makers together to solve critical national issues,” Boal said. He predicted that frequent and more effective collaboration, along with the decreased travel, expense and carbon emissions would help Australians embrace a more sustainable lifestyle.

The Federal Government’s NTS utilises Telstra’s Next IP network, along with both Telstra’s and Cisco’s business video and combined communications capabilities. Telstra’s Next Generation Services (NGS) division supports NTS with complete management of the Cisco TelePresence system, including installation, network and services.

opinion/analysis
The Federal Government might have saved a packet by deploying the TelePresence solution, but we’re betting it’s not quite as clear as all that. For starters, Cisco’s solution costs a pretty penny to start with — Internode’s deployment, for example, cost a cool half a million dollars. In addition, there have likely been many meetings held using TelePresence that would have previously been held via telephone or another style of communication, rather than travel itself.

In addition, not everyone likes TelePresence, I’ve used Cisco’s version, and while it’s great, it still doesn’t quite replicate the experience of being in a room with someone. It’s as close as you can get right now, but you still do miss out on nuances. Journalists are usually quite sensitive to all the small, finicky details of body language and so on, and there’s a little jarring sensation when you’re using TelePresence that some people won’t like. Most people won’t notice it.

Having said all that, it’s pretty much a no-brainer for a huge organisation like the Federal Government to deploy a videoconferencing solution of this nature, and we applaud this deployment. The less people that need to get on planes to travel interstate for meetings the better, and the closer communication organisations have, the better they will function. Nice work.

Image credit: Cisco. The opinion/analysis section of this article was contributed by Renai LeMay