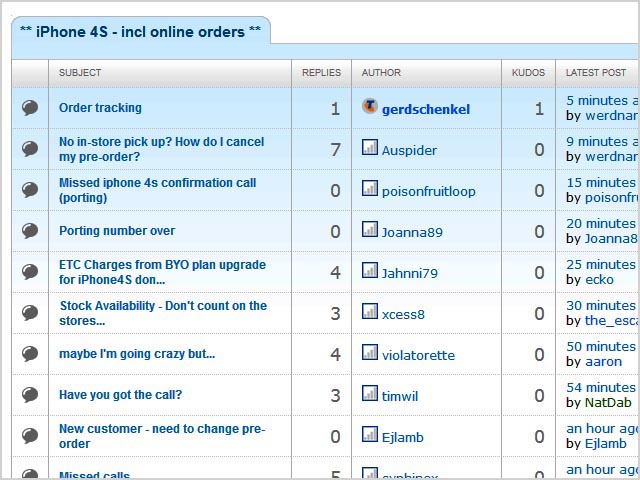 news Pundits have panned it as only a modest upgrade on the previous model, analysts have bemoaned the lack of an iPhone 5 and the traditional midnight launches have been cancelled. But if the flood of queries to the forums of Australian mobile carriers is any indication, demand is running hot for Apple’s iPhone 4S.

On Telstra’s CrowdSupport customer forum, the telco has created a specific forum to deal with enquiries about the iPhone 4S, which will launch in Australia tomorrow morning (Friday) and can be pre-ordered.

So far, the forum has received about 350 posts this week alone. That might not seem like a lot compared to a major forum like Whirlpool or MacTalk, where discussion about the iPhone 4S is also running hot, but compared with the other threads in Telstra’s forum, it’s quite large. The telco’s Android thread, for example, has just 451 posts, despite featuring posts going back to early July, and its Windows Phone thread just 146. There are a further 254 threads in Telstra’s general iPhone 4S thread.

Common enquiries being posted by customers include questions about the details of how they can pre-order the iPhone 4S, how it will be delivered, whether they will have to pay early termination fees upon upgrading to the device, how they can purchase insurance to go with it and so on. A number of customers are planning to upgrade from the handset’s predecessor, the iPhone 4, while others will move to it from an iPhone 3GS or even 3G.

“I’m amazed at how cheap Telstra set the iPhone 4S, as compared to the iPhone 4 on it’s original launch,” wrote one would-be iPhone 4S owner. “The big question I want to know, if I could pay out my handset fee for an existing contract, and re-sign up to the iPhone 4S. So [I’m on a] $59 Freedom Connect Plan plus $20 for my iPhone 4 32GB since May this year. What’s the options?” The comment was replied to by both another contributor and a Telstra staff member.

Relatively few customers appear to be migrating from the Android platform to the iPhone 4S, however.

A number of technology pundits — including the writer of this article — criticised the iPhone 4S when it was released, seeing it as only a minor upgrade to Apple’s iPhone 4. The main new features of the iPhone 4S are a faster processor and better battery life, along with a virtual assistant, Siri, that can be activated by voice command. A number of other new software features are available to existing iPhone owners courtesy of Apple’s iOS 5 upgrade available today.

However, telcos including Telstra and some analysts have predicted strong demand for the handset.

“We believe iPhone 4S sales will be strong in Australia as there is significant pent up demand from the base of iPhone 3G and 3GS users, many coming out of contract before the holiday season,” said Telsyte analyst Foad Fadaghi told the Sydney Morning Herald. “We have not revised our sales estimates despite the 4S underwhelming some market observers.”

MacTalk founder Anthony Agius published a lengthy blog post this week addressing much of the complaints about the iPhone 4S — ranging from the fact that the device doesn’t have a substantially new hardware design, to the fact that its screen size has not changed and competition from Android-based manufacturers.

“Judge the device based on your needs and if your current gear does it for you, consider yourself lucky,” he wrote. “If you think there’s a better Android device out there, stick it to Apple and purchase that thing. Just don’t whine that the iPhone 4S doesn’t do things that are technologically unfeasible, impractical or impede on the overall iPhone experience.”