The T-series of ThinkPad laptops has long been a staple in large organisations and small businesses around Australia. If you need a general laptop with enough power and portability for general computing, these have been the machines to get the job done.

However, the laptop market is a fast-moving one, and the nature of the ThinkPad line in general has also changed over time, naturally evolving and also reflecting its new owner. IBM used to own the ThinkPad range — but for the past half-decade it’s been Chinese manufacturer Lenovo pulling the strings. So has the ThinkPad series retained its quality? Or has it been reduced to being a has-been?

Design
If you’ve seen one ThinkPad, you’ve generally seen them all. The series’ trademark square black case screams business and is now shrouded in tradition.

The T520 in particular is a solid-looking laptop about 37cm wide, by about 25cm long and with a total height of about 4cm. On the front right of the laptop when its lid is shut is a hinge which you’ll need to pull to open that lid. To be honest, when we picked up the ThinkPad 520, the fact that there was a hinge at all — in an age when many laptops simply use a magnetic lock — was our first indication that this laptop was going to be something less than modern.

When was the last time an Apple MacBook featured a hinged lock to open its lid? By our calculation … it would be quite a few years now. That impression of legacy remains throughout the 520’s design.

In an age where DVI is fairly much standard in the market, the T520 comes with a VGA out socket on its left-hand side. Alongside it sit two USB ports and an e-SATA port, and a Display Port socket, which is a positive item. We are finding very little use for Firewire these days, with most devices being USB. However, the T520’s left-hand side also features a 4-pin Firewire socket. On the same side are a series of airflow vents.

On the bottom of the laptop are removable bays for various components. The battery can also easily be slid out of its tray.

When you open the laptop’s lid you’ll find a grainy-feeling trackpad, surrounded by five! buttons. We don’t know what you would even use that many buttons for. Two large-sized speakers sit on either side of the full-sized keyboard, and there’s one of the little toggles in the middle of the keyboard that can be used for moving the mouse. A fingerprint reader sits to the right of the trackpad.

It looks like from the T520’s online specifications page at Lenovo’s site that the laptop can also be delivered with a discrete NVIDIA NVS 4200M card, which would boost graphics performance.

The in-build DVD drive can burn DVDs and CDs as well as read them, and the T520’s battery life is rated at 11 hours, with its 9-cell battery. It supports the 802.11n Wi-Fi standard, and comes with gigabit Ethernet — more or less standard in this day and age.

Performance
To be honest, we were fairly dissatisfied with the ThinkPad T520’s performance in general.

To start with, the laptop comes loaded with crapware. From various Corel packages, to several dozen custom Lenovo utilities, to Windows Live bits and pieces and even Microsoft’s Bing toolbar, this is a laptop which you are going to want to completely reformat when you get it — to get rid of all the custom bloatware clogging its hard disk and its speed.

Windows 7 is a great operating system, and has virtually all of the basic functionality you need. Why clog it with extra software to carry out basic tasks like connecting to Wi-Fi networks?

Then there was the T520’s poor build quality. This machine just does not feel like a ThinkPad. Its plastic feels cheap, its lid fits poorly and makes a rattling sound when you pick it up, with the hinge not settling the display seamlessly onto the laptop’s bottom when the lid is shut, and the same is true of its battery — the unit just does not sit squarely with the rest of the laptop and rattles when you pick the laptop up.

Then there are the other archaic features which Lenovo has brought to what should be a new mainstream laptop. A 56k modem — in an age where 3G mobile broadband has replaced dial-up as the tool of choice for travelling executives. A trackpad that boasts five! buttons, where Apple’s comparable MacBook Pros feature none.

A VGA port instead of a VGA adapter, a mouse toggle which we haven’t seen anyone use in a decade, a latch to shut the laptop’s cover, where other manufacturers are preferring magnetic locks, and a giant oversized plug where the charging cord slips into the laptop’s back. Why, Lenovo, why?

The icing on the cake for us was the system beep that the T520 makes when you open its lid and it wakes from sleep. This ‘POST’ beep screams ‘legacy’ to us — why should a laptop beep when you open its cover, and if it does, why should it make a sound that we associate with motherboard crashes half a decade ago?

Then, too, the laptop feels bulky and heavy. This isn’t a desktop replacement machine — it’s meant to be mobile and taken on the road — but it feels too large and too weighty to easily slip into a laptop bag of any normal size.

Now, once you get past the T520’s obvious hardware faults, you find a laptop which is actually solidly powered — it performed very well in our day to day usage — and its battery life is also pretty decent. You can leave this one on your desk for a couple of days asleep, and the battery won’t be completely drained when it wakes up. And you could use it throughout most of a business day before charging.
The basic system specs are quite reasonable for a laptop in its category.

But the T520 could be compared to fitting a farm plough with a hotrod engine. Sure, it’ll perform OK, and at its heart it wants to be a speed machine, but its decent internals are surrounding by legacy hardware that will hold it back in practice. It’s a pity, but that’s the way things are. 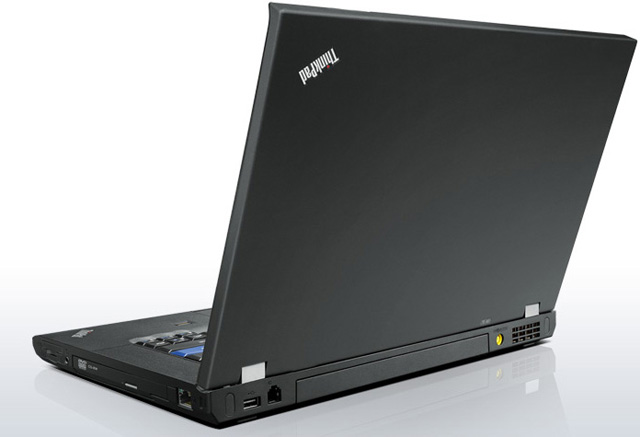 Conclusion
Lenovo’s T520 is a decently specced business-focused laptop which performs well for daily use but comes in a weighty, bulky and buggy form factor which suffers from poor build quality. In addition, the manufacturer has loaded the laptop with its own custom bloatware, and a bunch of dated hardware options such as a 56k modem.

There are better options out there, and many of them. Some of them are even offered by Lenovo itself, but you can also check out Dell, HP and Apple for great business laptop options. We’d recommend giving the T520 a miss at this stage.