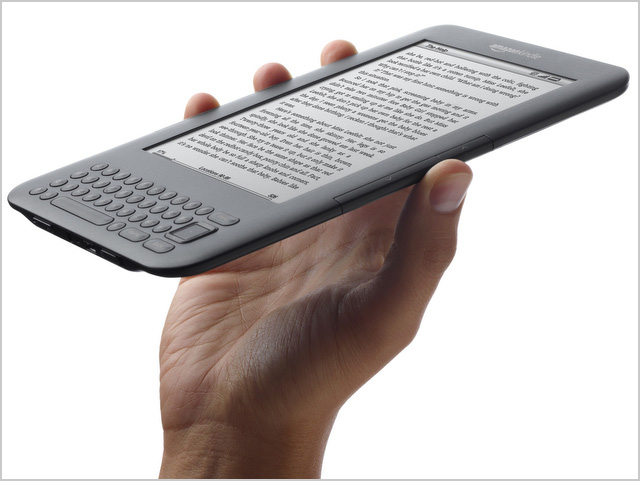 review What’s that, you’re still reading books on paper? How very old-fashioned of you, sir! Whether you like it or not, books are following the same digital trajectory as music and movies, and soon, it won’t be a question of whether you’re reading eBooks so much as what device you’re using to read them on.

The third-generation Amazon Kindle first launched in July last year, but you could only buy them through Amazon.com directly. Now, as of a couple of weeks ago, they’re available locally, and you can walk into any Woolworths, Big W or Dick Smith and buy one off the shelf. We’re actually surprised at how close the local pricing is compared to buying it from Amazon; for the top-of-the-range 3G version we reviewed, which costs $210 locally, it’s only ten dollars cheaper once you factor in shipping.

Design
Stroll into any JB Hi-Fi or Harvey Norman and you’ll see up to a dozen different e-readers from brands you’ve probably never heard of. With a couple of exceptions, they’re all pretty nasty-looking, with ugly designs and questionable build quality. The Amazon Kindle is cut from a different cloth; the graphite grey casing, tapered edges, soft-touch rear and slim dimensions all add up to a classy-looking e-reader that’s light enough to hold with one hand.

Most of the design elements of the third-gen Kindle have been retained from the original Kindle that launched in 2007, just in a much slimmer and sexier package. A 6” e-ink display takes up most of the Kindle’s front, with a QWERTY keyboard and five-way navigational pad below it, page-turn buttons on either side of the screen, and the rest of the controls – volume, headphone jack, micro-USB port and power button – on the bottom.

Features
Like most e-readers, the Kindle’s 6” screen uses e-ink technology. This differs from traditional LCD and AMOLED displays in that it uses real ink to render elements on the screen. If you haven’t seen an e-ink display in action yet, you’ll probably be taken aback (as we were) by how closely it resembles a printed page.

This print-like display is a lot easier on the eyes for extended reading than an LCD or AMOLED display, and it leaves smartphones and tablets for dead when it comes to visibility in direct sunlight. The other advantage of e-ink is that it draws such a miniscule amount of power compared to traditional screen technologies. With wireless off, and assuming you read for one hour a day, the battery on the Kindle is good for an entire month.

Built-in 3G is one feature that you won’t find in any other e-reader available in Australia, making it easier to buy and download books from the Kindle Store without needing to hunt down a Wi-Fi network or, worse, transfer books from your computer. What’s different about this implementation is that you don’t have to pay any ongoing charges for 3G access like you would a tablet. Usage is free for the lifetime of the device, and even better, you can use it in 100 countries and territories around the world for free as well.

The Kindle can do a few other things besides displaying books, but they’re mostly proof-of-concept features and nothing you’d really want to use on a regular basis. There’s a WebKit-based browser that works for free Internet access overseas in a pinch, but it takes so long to render pages that you’re likely to give up in a hurry and retreat to the safety of your nearest Internet café. The text-to-speech feature will make even the most interesting book sound like a disjointed robotic monologue, and the MP3 playback doesn’t display the name of tracks or let you navigate through your music library.

Performance
For all the perks that the Kindle offers over a tablet for reading, the one drawback is that it’s a lot slower to use. The slower refresh rate of e-ink compared to LCD results in brief black flash every time the screen changes (like when you turn a page). The lack of touchscreen also means you have to resort to using the five-way control pad and side-mounted page-turn buttons to do anything – if you’ve gotten used to touchscreens on all your gadgets, the Kindle will feel awkward to use by comparison, and the somewhat clunky user interface doesn’t make it any easier.

Amazon claims that most books download in less than 60 seconds over 3G, although this depends on how thick the book is and whether you have good 3G reception. We bought George R R Martin’s latest 1,040-page novel, A Dance with Dragons, directly from the Kindle; over Wi-Fi, it downloaded in 58.5 seconds, and over 3G (with three out of five bars worth of signal) it downloaded in 1 minute and 39 seconds.

One thing’s for sure: buying eBooks is significantly cheaper than paper books. Buying the six books in Dymocks’ top 10 list from the Australian Kindle store cost $43.79, whereas buying the same books in paperback cost $115.87. Those savings can really add up if you’re a big reader, and the Kindle will pay for itself after you’ve purchased twenty or so books. If you’re a fan of the classics, you’ll break even much sooner, as the Kindle Store offers over 1.8 million classic books for free.

Conclusion
The Amazon Kindle 3G is over a year old now, but it’s still holding its own remarkably well against newer e-readers. The lack of touchscreen is probably its weakest point, especially now that Kobo and Sony – its two main competitors – have released e-readers with both e-ink displays and touchscreens. Still, the Kindle’s built-in 3G and larger selection of books (which are generally cheaper than other platforms) continues to give it an edge over other e-readers.

But the Kindle isn’t just competing against other e-readers. Tablets are a much bigger threat: they’ve got larger screens, can run multiple eBook apps (so you can buy books from whichever service sells them cheaper), can be used for dozens of other things besides displaying books, and are cheaper than the Kindle if you go for an entry-level model.

E-readers definitely have their advantages over tablets, as we mentioned earlier in the review, but your mileage will vary as to whether those things outweigh the convenience of a more powerful multi-purpose tablet. From our own experience, the Kindle hasn’t been getting much love since we got an iPad, but it’s still invaluable during vacations – especially when there’s long hours on a plane and/or a beach involved.