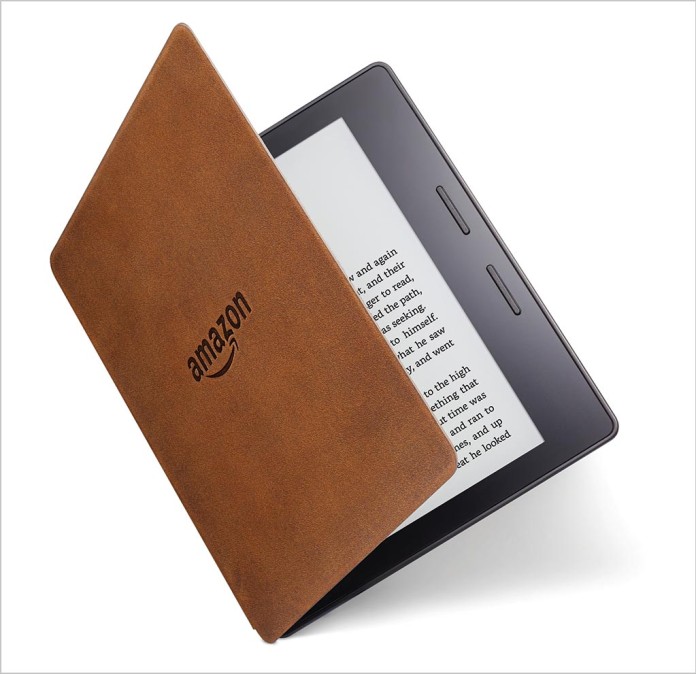 news Amazon has launched a new flagship Kindle called the Oasis – the eighth generation of its dedicated e-reader device — which will sell in Australia for the high price of AU$449.

Amazon said the Kindle Oasis was designed “from the ground up” for readers, with features that include an all-new, thin and light form factor, a bevelled edge to make holding the device for long periods easier, and an included leather charging cover that delivers unheard of battery life.

The thinnest Kindle ever, the Oasis weighs in at just 4.6 ounces (approximately 130 grammes) and is 3.4 mm at its thinnest point – 30% thinner on average and over 20% lighter than any previous Kindle.

Amazon said this was achieved via a “featherweight” polymer frame that has received structural electroplating to coat it in metal. This maintains lightness, while ensuring the Oasis has the strength and rigidity to withstand the abuse of being carted around in bags and so on.

Extended reading sessions on many tablets can end up leaving users with aching hands, so the new Kindle has been given an entirely new shape – shifting the centre of gravity to the palm. This means it can rest in the hand “like the spine of a book”, according to Amazon, so the device feels balanced for one-handed reading.

New, larger physical buttons also make turning pages an easier affair, a task that can also be carried out via the touchscreen.

Further, a built-in accelerometer can tell if users are reading with their left or right hand, and automatically shifts the page and page turn buttons to suit.

As briefly mentioned above, a new dual-battery system means the Oasis can be used for months without recharging (according to Amazon). Once the cover is connected to the Oasis, the extra battery begins recharging the device automatically.

Both device and cover can be recharged simultaneously as long as both are clipped together and plugged in. Additionally, a new ‘hibernation mode’ minimises power consumption when the Oasis is not in use.

Amazon said the charging cover is made of “high-quality” leather and comes in black, merlot or walnut flavours.

The cover, which wakes the device when opened and puts it to sleep when closed, employs 12 magnets to form a tight attachment between the device and cover, yet staying easy to detach should you choose to remove it.

The most important element of any reader is, of course, the display and Amazon has endowed the Oasis with the latest generation, 300 ppi Paperwhite display for what it describes as “crisp, laser-quality text”.

A redesigned built-in front light features 60% more LEDs to produce the brightest ever Kindle display. Amazon adds that it employed new cylindrical diffractive patterns to increase the consistency and range of screen brightness providing a good reading experience in all types of lighting conditions.

The new Paperwhite display also is the first Kindle display built with a super-thin 200-micron display backplane that is still tough enough to handle the stresses and strains of daily life. Also boosting robustness is a custom cover glass that has been engineered from chemically reinforced glass.

While all of the above sounds impressive, potential buyers should be aware that trips to the beach should be attempted with caution, since the Oasis is not water resistant, according to reports.

The new Kindle Oasis will cost a fairly steep AU$449 for Australians, and is now available for pre-order internationally, with shipping to start in “the coming weeks”.