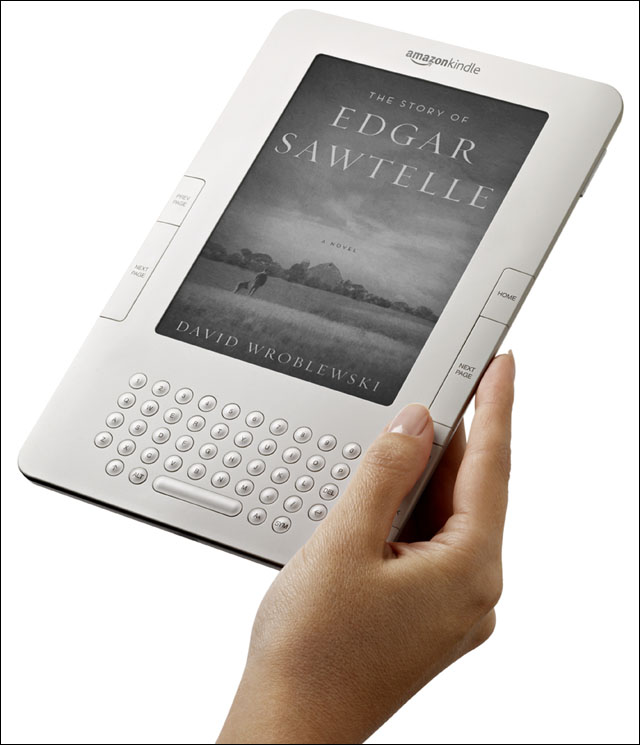 review Amazon might have started selling its Kindle range of eBook readers in Australia late last year, but there is a world of difference between the performance of the device and range of the Kindle bookstore in Australia compared with Amazon’s home country of the US.

This article will document that difference to make it clear what readers are — and aren’t — getting when they buy a Kindle in Australia — specifically focusing on the Australian aspects of the device without going into a general review of the entire platform. For the purposes of this review we borrowed a Kindle DX from Amazon, as well as consulting with colleagues based in the US for comparison purposes.

Wireless connection
The first and most obvious way that the Australian experience of the Kindle differs from that of overseas customers is the 3G mobile broadband connection the Kindle uses to download content. In the US this connection is provided by AT&T, but in Australia it is not clear which carrier is providing the Kindle’s connection (coverage map here). We asked Amazon, but the company would only say it was supported by AT&T’s global network.

Opinions online differ about what actual network provides the Kindle’s coverage, but many believe that Telstra at least is involved, and/or either or both of VHA and Optus. We haven’t seen many complaints about the US connection, but in Australia we found the Kindle DX’s mobile broadband connection painfully slow at times and flaky — much slower than browsing the internet on an iPhone or Android handset, for example.

In the worst case scenario it can take up to a minute to navigate to a sub-category. The connection may also drop out on the odd occasion but not enough to warrant irritation. However, downloading books doesn’t actually take to too long once the connection gets going — it took less than a minute to download Homer’s The Iliad and newspaper subscriptions are almost instantaneous to download, for example. In short, it will depend where you are and how you use the Kindle as to what sort of mileage you will get from its wireless connection.

Book availability
It’s a tricky task to compare the amount and type of books that are available through the Kindle store in Australia when compared to what’s available in Amazon’s home country of the US and other online bookstores. A really detailed and complete analysis of what exactly is available is beyond the scope of this article.

But what is immediately apparent from a surface-level analysis of the Kindle store is that it both lacks Australian content (a problem also shared by rivals such as Borders’ eBook store), and that it lacks the volume of content compared to the Kindle store in the US.

When we searched for Australian authors on the Kindle store, we could not find the works of Bryce Courtenay at all, and Thomas Keneally had only two books available — Abraham Lincoln (for $13.60) and Australians (for $22.20). In comparison, there are 20-plus works by Courtenay on the Borders eBook store, with the most expensive, The Story of Danny Dunn costing $30.95. The book is also available in hardcover at Dymock’s for $49.95.

My favourite Australian author, Sean Williams, has three books available on the Kindle store — for example, The Sky Warden and The Sun for $10.42. The Borders application has one piece of William’s work — Earth Ascendant for $7.69. Both books are available in paperback at Dymocks for 20.99 AUD and 19.99, respectively.

We also looked in both stores for a laundry list of Australian authors ranging from Peter Carey to David Malouf, to Tim Winton, Helen Garner and DBC Pierre. In most cases, both the Kindle store and Borders’ eBook store had few entries — usually only one or two books from each category. These authors are, however, well-represented in mainstream paper book stores.

Secondly, we compared the overall numbers of books available to Australians browsing the Kindle store, compared with Americans in the US browsing the same store. There are a diverse range of books are available in Australia through the Kindle store — 394, 534 of them — with 27 categories and numerous sub-categories. The top three largest categories are Non-fiction (257,935 books with 32 sub-categories), Fiction (130,737) and Science (41,046). Other categories range from Religion and Spirituality to Politics and Current Events to Arts and Entertainment.

Broader content availability
Again, when you look at non-book content available to Australians through the Kindle store, the options are limited. Not just books — Australian newspapers, magazines and blog subscriptions are missing in action and it looks like they aren’t coming any time soon.

“We’re working on it. At Amazon, we are always working to expand selection for our customers and this is true with Kindle books as well as newspapers and magazines internationally,” said an Amazon.com spokesperson in response to our request for comment on when Australian readers can expect Australian press and subscriptions to be available on their Kindles.

The Kindle Store is split into three categories — books, magazines and newspapers. The blog category — where a reader can subscribe to blogs — was not apparent after scouring the Kindle DX and the Kindle shopfront. Amazon was approached if the blog subscription category was available to Australian readers. The Amazon.com spokesperson responded: “Not at this time, but we are working on making blogs available internationally.”

The newspaper category in general is extensive with 118 newspapers listed and 20 subcategories — US, UK, Spain, Russia, Portugal, Mexico, Japan, Italy, Ireland, International, India, Germany, Czech Republic, Colombia, China, Canada, Brazil, Argentina. The US category is the highest represented, with 62 newspapers and most major city publications are listed. The newspaper figures were compared with US Amazon account and the figure increased to 136 newspapers. This is most likely attributed to smaller American press omitted from the Australian market because of lack of relevance.

There are 40 magazine titles to browse through and the top three bestselling behemoth’s is Time, Shape and Newsweek. There are 63 magazines available on the Amazon Kindle store in the US. Again, like the newspaper section, Australian magazines are a no-show. A cross section of mainstream popular publications are present like Forbes (ranked no. 12), The Escapist (32) and PC Magazine (6).

Overall
The Kindle DX is available from the Amazon store for US$379 (approximately AU$430) with the normal Kindle going for US$189 (AU$215). It does not appear as though Amazon charges a premium for Australian customers.

Overall the Kindle is a mixed bag for Australians compared with the experience granted by Amazon to its US customers. Australians get much less content in general — and specifically Australian content is very much lacking. The wireless can also be slow and patchy at times. But the Kindle still represents remarkable value — at about $215, its normal model is competitive with Borders’ Kobo eReader, which has much lesser specifications. And there is still a good amount of global material available through the Kindle store.

Do you have a Kindle and live in Australia? What has been your experience of the device and the content available?