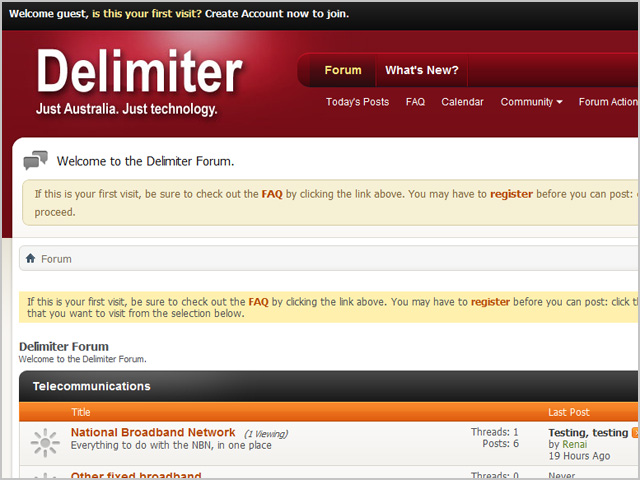 I just wanted to invite you to start beta testing Delimiter’s new forum, which we have implemented over the past several weeks. You can find it by clicking here!

It’s safe to say that we’ve had a bit of a botched history with forums. Delimiter first launched a forum back in May 2010, however it was quickly overrun with spam, and we were forced to close it. At that stage we were using the venerable phpBB forum content management system, which turned out to be a nightmare to administer and vulnerable to the viagra-touting spam hordes.

After that experiment failed, a few months ago we launched a much lighter and more flexible forum based on bbPress. That forum also failed, but not because of the spammers; the bbPress forum software has reached the end of its life as it is being discontinued as a stand-alone forum package and re-integrated into WordPress as a plugin. We tried this plugin out over the past few months, but the truth is that it’s not yet ready for commercial use.

With this in mind, we went back to the drawing board over the past month or so, and tested about a dozen different forum software packages out. The one which stood out in the end was vBulletin. It’s a mature package used by a number of other major forums, both in Australia (MacTalk and Overclockers, for example) and overseas, it’s flexible and powerful and easy to administer.

So why implement new forum software on Delimiter, when we already have a pretty good commenting system on articles?

Basically, the discussion on Delimiter on a number of key issues (the National Broadband Network, for example, the Government’s Internet filter project and even more traditional IT issues such as enterprise email platforms has grown too big for WordPress to handle. You guys need to be able to create your own threads and control the community more yourselves — so we need a forum.

Over the next few weeks you’ll see an increasing level of integration between Delimiter’s WordPress site and the Forum. The top Forum posts will be highlighted on the WordPress site in dedicated articles, and we’ll also be bringing the designs of the sites together a bit more so that each refers to each other.

With that, I leave it up to you. Go and check out the beta of the Delimiter Forum!

PS: A number of you have also requested that we implement the Disqus commenting system on Delimiter’s WordPress site. Rest assured this is coming as well — there is a small CSS formatting error we need to work through first, but it’s on its way. This will bring improved commenting to Delimiter, including the ability to login with your social networking profile, ‘like’ comments and so on. Stay tuned!