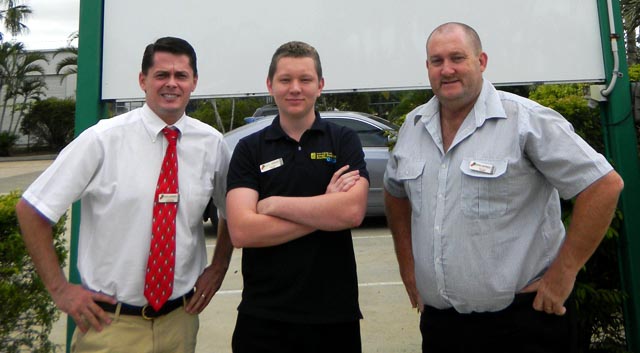 blog We couldn’t help but be highly amused by this media release issued today by the North Queensland Small Business Development Centre in Townsville, spruiking the work of one Ayden Ward, who appears to be what we like to describe (in technical terms) as an uber-nerd.

The media release below tells the tale of how Ayden (pictured above with the centre’s CEO Brian Arnold (left) and senior IT consultant Peter Read (right) has wired up the centre’s entire headquarters with a new Internet connection, “similar to the National Broadband Network”.

All we can say is, if this 16-year-old really is as good as this media release says he is, then NBN Co had better sign him up as its first trainee quick smart. It makes sense, after all — there is a NBN first-release rollout site in Townsville, Ayden won’t cost NBN Co much, and he can learn from the best.

And to Ayden himself, we’ve got just one message. Welcome to the cool club, son. You’re a geek and we’re behind you one hundred percent of the way. You may have had a hard time in high school because of your computer interests, but when you get a bit older you’ll realise the geeks have inherited the earth. And if anyone ever picks on you, don’t forget you can install a zombie server on their PC and get them busted for looking at *naughty* sites. Rock on!

Ayden Ward is not your average 16-year-old. In four months the junior systems administrator has created a new IT system for the North Queensland Small Business Development Centre (NQSBDC) which is on a high-speed connection that is similar to the National Broadband Network (NBN). Under the guidance of senior IT consultant Peter Read, he has also completed his Certificate IV in Information Technology and is now preparing to work part-time at the centre while starting IT studies at James Cook University next month.

As the chief executive officer of the not-for profit organisation, Brian Arnold said the result was an ideal example of how a traineeship should work. “Ayden has gained valuable experience in his field of interest under the direction of our senior IT consultant and the centre has gained an overhauled IT system, so the traineeship has been successful for everyone involved,” Mr Arnold said. He added that Mr Ward was a “very enthusiastic trainee” who was “hungry to learn all there is to know about IT”.

Mr Ward said the traineeship had been a “huge opportunity” for him: “I am actually in charge of the show for IT, with guidance from Peter, which is unusual for someone my age and will definitely look fantastic on my resume,” The enthusiastic teenager said.

The traineeship was made possible by a grant from the Department of Education, Employment and Workplace Relations to allow the centre to establish a high-speed internet connection. “Our DEEWR Project is said to be one of the most innovative and cutting-edge in the country because it feeds all the businesses in the centre,” Mr Arnold said.

The NQSBDC currently has 22 work spaces and seven offices that are occupied by businesses either in their initial start-up stage or that have outgrown their home-based status. The centre acts as a business incubator supporting new businesses and helping them grow in a dynamic environment.

The new IT system is also saving businesses in the centre money. “We were able to charge one rate for use of the services, which left a big enough margin for us to make a profit and use the funds to employ Ayden as a trainee and Peter as the part-time coordinator,” Mr Arnold said. Businesses can save money by using VOIP and being connected to the centre’s network printer.

Those wanting to get a feel for the NBN are welcome to visit the centre. “We have got the capability here already to show people what they can expect from the NBN so they can get a real sense of the technological improvements to come,” Mr Arnold said.