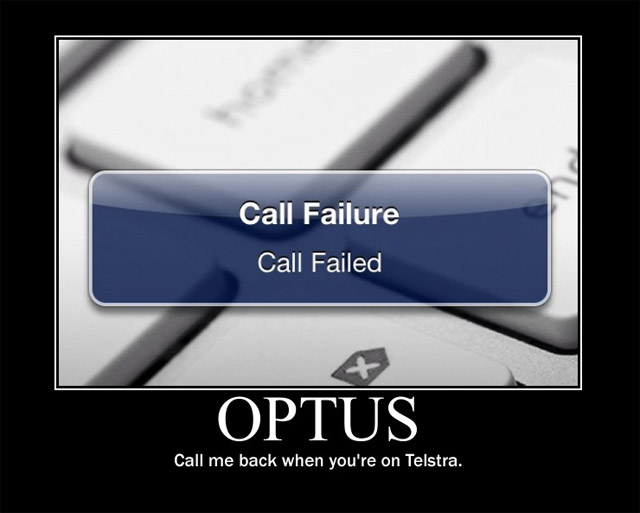 blog The Daily Telegraph has launched what appears to be an all-out attack on SingTel subsidiary Optus, claiming the telco’s mobile coverage is the pits. This is probably the strongest paragraph in an article full of complaints:

The Daily Telegraph tested an Optus iPhone 3G in varied buildings and conditions in suburbs on all sides of the CBD, including Surry Hills, Darlinghurst, Erskineville and Balmain, in an apartment building, a house, a backyard and an office block. In each the signal failed, the phone did not receive calls or was so distorted as to be useless.

Now, Optus has done much to improve its mobile coverage since its much-publicised problems several years ago when the iPhone first launched in Australia — the telco is basically constantly throwing cash at its network. In addition, it seems as if the Daily Telegraph’s testing wasn’t precisely scientific … the newspaper could have used multiple iPhone 4 handsets instead of a single legacy iPhone 3G to do its testing.

But nonetheless, this is more or less the problem Optus is facing right now. In a basic litmus test of its mobile network, that mobile network will often fail. I have a number of friends and family using Optus network, through its own brand or that of its subsidiary Virgin, and the Daily Telegraph’s story is a common one. It’s not just a perception that Optus’ network is still suffering problems in metropolitan areas — it’s reality.

The really difficult thing is to know what precisely Optus needs to do to resolve its ongoing issues. Modern telco networks (particularly 3G mobile networks) are incredibly complex beasts, and “fixing” its network is in reality a task composed of literally of hundreds of thousands of smaller tasks. Only Optus can really say what’s going on here and what needs to be done. We wish it the best of luck with that task, as we do its similarly poor performing rival Vodafone. In the meantime, of course, there’s always Telstra.