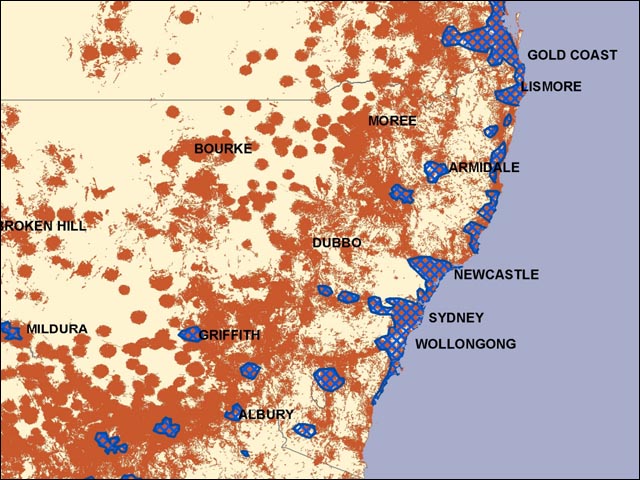 Optus is considering pursuing legal action over a set of maps of 3G coverage (see image) which Telstra has produced in an effort to show the dominance of its Next G network over the SingTel subsidiary’s own mobile offering. The orange sections of the map are supposed to be Telstra’s coverage, with Optus in blue.

The maps were linked to from Telstra’s Exchange blog yesterday, with Rod Bruem — Telstra’s corporate affairs manager for its business division — stating that the company’s competitors were still trying to catch up with Next G. “This map shows just how inadequate the Optus 3G 2100 (MHz) coverage really is,” wrote Bruem.

“Optus is considering its legal options with respect to stopping these misleading claims,” said Optus in a company statement.

“The information on Telstra’s Exchange website completely ignores Optus’ growing mobile coverage, especially in regional Australia, which now covers over 96 percent of the Australian population. We look forward to a correction as they have grossly misled the consumer and distorted the options that Australian customers have when it comes to mobile coverage.”

Bruem had pointed out that some devices — such as the iPhone and iPad — might not support Optus’ 900MHz spectrum networks, which it predominantly uses in rural areas. However, the new iPhone 4 does support the 900MHz band.

“The vast majority of Optus smartphones able to access the full dual band coverage, which is not included on Telstra’s map,” said the Optus statement.

The SingTel subsidiary claimed that “the fear of more choice and competition” for mobile services in Australia was forcing its competitors into making misleading claims when it came to comparisons of mobile network coverage.

“In the past 12 months (FY09/10), Optus has quadrupled the carrying capacity in our mobile network and added more than 600 new sites,” the telco said. “This represents a significant investment in both metropolitan and regional Australia.”

The majority of reader comments on Bruem’s entry were negative, and some readers on the Telstra blog backed Optus’ view that Telstra’s comparison was not apples to apples.

“Next G is clearly faster and has better coverage to the Optus network (2100 and 900), there is no doubt, but leaving out a huge chunk of Optus coverage because you are basing the argument on a SINGLE handset that does not operate on the 900 band is sneaky at best and misleading at worst,” wrote one reader.

“Those maps are so ameturish and deceitful it’s embarassing to think a major corporation like Telstra is responsible for them,” wrote another.