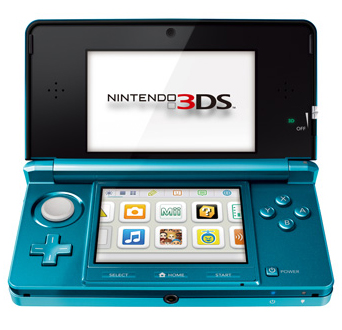 Nintendo last night announced that it would start selling its flagship handheld 3DS console in Australia on March 31 for $349.95, bringing 3D viewing technology to the gaming market for the first time.

The device features a bottom touch screen, equipped with a telescoping stylus, and a top screen which displays 3D visuals. Users will be able to select the level of 3D they enjoy most, through a system called “3D depth slider” that will adjust the 3D effect to increase it, decrease it or even turn it off.

A built-in motion sensor and gyro sensor will allow the handheld to respond to gamer’s movements and transfer real-life motion into the game. Furthermore, users will have extra power of control through a circle pad which enables 360 degrees of movement, bringing back memories from 1996.

“It brings the same degree of responsiveness that gamers enjoyed when Nintendo introduced an analog control stick to navigate Mario (…) on the Nintendo 64 system,” Nintendo said in a media release.

The whole 3D experience will also be enhanced by six “augmented reality” – AR – cards. When read by two outer cameras, they generate superimpose images and animations onto the scene. But there’s also a third camera that points at the user’s face, taking 3D pictures, and enabling the automatic creation of Nintendo Mii characters.

“So users shouldn’t be surprised if they see a dragon popping out of their kitchen tables,” Nintendo stated. “Developers can also use this technology to add creative new experiences to their games”.

Connectivity will also play an interesting role in the 3DS environment. An application called StreetPass will allow exchanging game information with other Nintendo 3DS systems as owners pass one another during the day. New content and updates will be made available by a second feature, called SpotPass, which enables users to connect to compatible public hotspots and thorugh a wireless broadband connection.

From a games perspective, Nintendo says each handheld would come with a set of preloaded games, but to have more choice – including “vintage” gems from its previous Game Boy system – users will have to wait until late May when the Nintendo E-shop becomes available.

Parents will be able to limit Internet access or the games their children play, by using a PIN code. When into sleep mode, the 3DS will act as a pedometer rewarding gamers with “Play Coins” for the steps they take: this credit can be traded in for more content and thus for more entertainment.