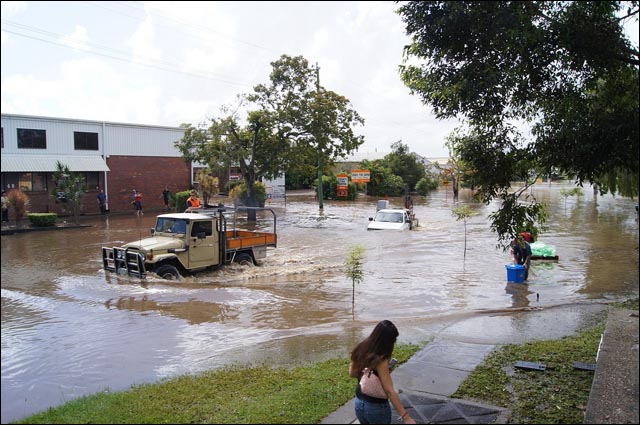 Telco giant AAPT this afternoon revealed a number of its Brisbane-based co-location hosting sites were in danger of being affected by rising floodwaters in the capital, in the wake of news this morning that it had powered down one site in Eagle Street.

“A number of our Queensland Co-Location sites are currently under threat and we have commenced exiting our equipment from those sites as of 12 January,” the telco’s head of wholesale sales John Sofianidis said in an email update to potentially affected customers this afternoon.

The news came after AAPT was already forced to power down its facility at 167 Eagle St in Brisbane this morning. The site is located close to the river’s edge, but it remains unclear what significance it has in the telco’s network.

Sofianidis noted that staff at AAPT’s Brisbane office had evacuated yesterday as a precaution to allow them to focus on their personal situations. In addition, he said, like a number of other telcos, the company on Monday experienced an outage in a number of fibre-optic links carrying traffic between Sydney and Brisbane.

However, there is a bright spot in the telco’s troubles this week.

“It is important to note that our Central Office site that houses customer infrastructure (located in Fortitude Valley) is currently under no threat of flooding,” the executive wrote. “Our network team is monitoring the situation closely.”

In a separate statement, AAPT chief executive Paul Broad that “like other telcos”, the company’s infrastructure had been affected in Brisbane and South-East Queensland, and it was working in partnership with “other tier one companies” to provide continuity of telecommunications services where possible.

“Because of the unpredictable nature of this disaster, it is difficult to assess the actual impact on our networks,” Broad said, adding his company’s deepest sympathies went to families caught up in the floods.

PIPE still up
This morning, another major datacentre owner, PIPE Networks (a subsidiary of TPG) had said its facility at 127 Creek St — in a location also used by other entities such as the Queensland Government itself — could have been forced to go onto emergency power due to a potential shutdown of the main Energex grid in the area.

One of AAPT’s problems at its Eagle Street facility has been that the main grid power has been shut off in the location. Creek St is a few blocks uphill.

However, this afternoon PIPE chief operating officer Jason Sinclair said it was highly unlikely the power would actually be shut off, with his company’s advisory being sent out early to give customers a heads up about the current situation.

Sinclair, who was manning the fort at Creek St solo, had a birds’ eye view of the water lapping into Eagle St, which he said was about five blocks back from Creek St.

“Today it’s been predicted to rise a further metre. It would need to rise another 10-15 metres to get to where we are here,” he said. Like other telcos, PIPE’s facilities in Fortitude Valley are also fine.
The Brisbane CBD was ironically quite calm, with the sun out, the executive said — with only emergency services and Energex staff walking the streets and resolving problems.

iTNews has posted an extensive roundup of the current status of datacentre facilities operating in the flood-affected areas, with most operators reporting their facilities hadn’t been affected. AARNet has shut down one Brisbane point of presence.